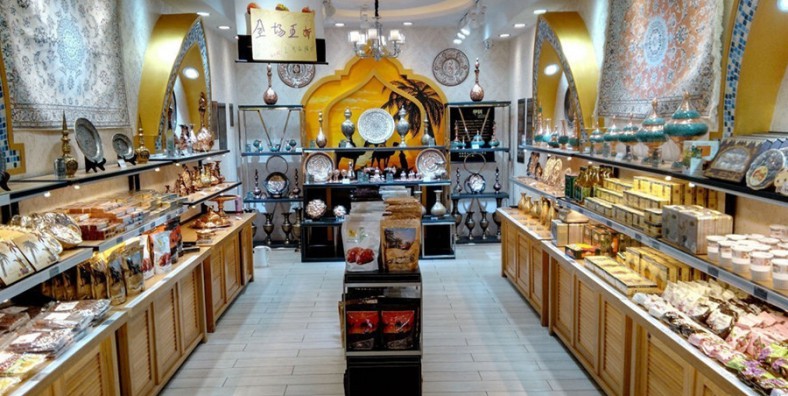 The Muslim Community is known as Muslim Quarter in Xian or colloquially called “Huifang (回坊）” in Chinese. It is said there are over 300 Muslim local snacks on the streets in Xian Muslim Quarter that attract a consistent flow of visitors everyday coming here to savor or just have a glimpse.

Address: the north of the West Street in the Xi'an city center

Why is Xian Muslim Quarter So Special？

The Xi’an Muslim Quarter, is a relatively large Muslim enclave in Xi’an City, China. The Xi’an Muslim Quarter is located inside the city wall of Xi’an and mainly consists the area bounded by the Xida Avenue, Beiyuan Gate, Hongbu Road, and Zaoci Street. Today, the quarter comprises four neighborhoods, Huajue Xiang, Hongbu Jie, Xuexi Xiang, and Sajin Qiao. According to demographic statistics in 2003, the Muslim population living in the quarter was 32,361, 49.8% of the total Muslim population in Xi’an city. In the past two decades, Xi’an Muslim Quarter has become a well-known tourism site which is famous for its culture and food.

History of Muslim Quarter in Xian

Xi’an was the starting point of the ancient Silk Road 1,000 years ago in the Western Han Dynasty (206 BC-9 AD). A number of merchants and overseas students from the Arabic countries and Persia went to Xi’an for business and studying since the Western Han Dynasty (206 BC-9 AD); they settled down on the present Muslim Street, and they were called the Hui people by the locals. One generation after another, the descendants of the Hui ethnic people multiplied and lived on the street, and the number has now reached over 60,000.

Best Time to Go to Muslim Quarter in Xian

Muslim food and souvenir market is another feature of the area. The Beiyuanmen Muslim Market located just to the north of the Drum Tower is a great choice after the sightseeing in the city center. About 500 meters (about 547 yards) in length from south to north, the street can be reached through the archway under the Drum Tower. This street is paved with dark colored stone with green trees providing heavy shade during summer; the buildings on both sides of the street are modeled on the styles of both the Ming (1368-1644) and the Qing Dynasties (1644-1911). Some of the constructions are restaurants; while others are stores. But here there is one thing in common: the owners are all Muslims.

Beiyuanmen Muslim Street has a long history. It is said that in olden days, foreign diplomatic envoys and merchants lived here and then they married and had children, so gradually the population increased. Today, most of the inhabitants here are the descendants of those immigrants. All the Muslims here are the pious and devout followers of Islam so they form a tight knit community, which maintains its own culture and traditions to this day even in such a modern society. People here are very familiar with each other because they were companions when they were children and then they grew to adults together and still then one after another they got married and had their own children. As time goes on, definitely they will become older and older or even pass by together.

Walking along this twisted, narrow street which is aligned with stores on both sides, you can see that Muslim men with white hats sit inside the stores and talk leisurely with each other. In front of the doors of some stores, old men with white beards sit on the cane chairs enjoying the tender touch of the sun and having fun with the little children running along the street. The main goods of these stores are authentic hand-making Muslim food which tastes very good. While still there are small stores selling the special local products of Shaanxi Province and yet others provide you with exquisite souvenirs.

One of the most famous dishes of Xi’an is the Roujiamo — marinated beef or lamb stuffed inside a freshly baked bun. Another traditional Uygur dish found here is the Crumbled Unleavened Bread in Mutton Stew (Yangrou Paomo) — pita bread soaked in lamb soup. You can find a variety of soups here with all kinds of meats in them, including sheep blood.

Then there’s the bean threads in Shaanxi flavoring and of course, the Xi’an dumplings. Xi’an is also known for its cold noodles, which can be made from rice or from flour. On this street there are dozens of noodle stalls, where you can ask for cold noodle dish — you won’t regret it!

Roast beef, mutton or lamb is another snack that can make your mouth water. After broiling on a charcoal fire with some flavorings on the meat, it is ready for you to enjoy. While the most famous snack on this street is the steamed stuffed bun of Jiasan. The main ingredients of the steamed stuffed bun here are beef or mutton mixed with the soup decocted from the bones of sheep or cattle.
There are also fruit pies made with persimmon here which are considered as the unique refreshment in Xi’an. These pies take the bright red, glittering and translucent persimmons from the Lintong District of Xi’an City, Shaanxi Province as the basic ingredients.

How to get to Muslim Quarter in Xian

If you want to get out of the traffic and hassle of navigation, you can book a private tour package that includes visiting, dining and transfer from us. Our local guide and driver will escort you to the Muslim Quarter in Xi’an in the fastest and most convenient way and take care of all the details. You just have to focus on the visiting.

4 thoughts on “Muslim Quarter in Xian”