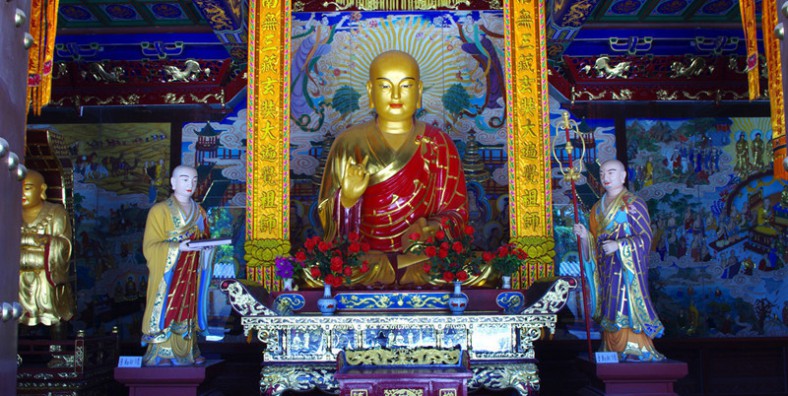 The Xingjiao Temple (兴教寺) was built in the year 669 by a Tang Dynasty ruler named Emperor Gaozong (Li Zhi, 628-683) in honor of a monk named Xuanzang (602-664) who had traveled to India and brought back a lot of Buddhist literature that he then translated. “Xingjiao” means flourishing teaching, and another Tang Emperor put these words on a post long afterwards. A temple that stood there before was destroyed during the Qing Dynasty (1644-1912) era.

Why is Xingjiao Temple So Special?

Xingjiao Temple is a well-known Buddhist temple, located in Chang’an, Xi’an, Shaanxi Province . Xingjiao Temple was built in AD 669, holds the remains of Xuanzang, who is a famous Chinese monk who traveled to India to retrieve Buddhist scriptures in the seventh century and inspired epic Chinese classical novel Journey to the West. The five-storied Buddhist relic pagoda, many relics of Xuanzang are well preserved inside the temple, along with the pagodas of his disciples, Kuiji and Yuance. Since his ashes are covered in a tall brick pagoda, the temple is regarded as his burial place. Emperor Tang Suzong wrote two characters “Xing Jiao (Flourishing Teaching)” on the stupa, which means that Buddhism would flourish by inheriting Xuanzang’s achievement, Hence it, the temple used the present name Xingjiao Temple, means the Temple of the Flouring Teaching.

Xuanzang was born in 602 and witnessed the fall of the Sui Empire and the rise of theTang Dynasty (618-907). He was remarkably intelligent and religious. He traveled widely in China. He wanted to better understand the original Buddhist teachings and thought that the translations of Buddhist scriptures that he found in China were poor and inaccurate. So he wanted to travel to India.

At that time, the Tang Empire had a war with a country in Central Asia. In 629, he convinced some border guards to let him pass westwards and traveled along the Silk Road. First he went to Turpan in the area of modern Xinjiang. Then, he kept traveling west. He met Mahayana Buddhism monks and non-Mahayana Buddhism monks. He went all the way to what is now Afghanistan that he said had the westernmost Buddhist monastery in the world. He then went to a country called Gandhara where much of China’s Mahayana Buddhism originated. He then went to India and traveled around, and then he went to what is now Bangladesh.

During all these travels, he encountered groups of monks and monasteries of monks. He learned from them and also acquired scriptures from them. He also learned from some of the leading monks. They appreciated that he would have a lot of influence in the Tang Empire if he went back, and they supported him. When he returned to the Tang capital of Changan in 645, the Emperor Taizong and the whole city honored him.

It is said that the ancient novel Journey to the West was inspired by his journey. It is said that parts of his body are in different places in the world. Japanese troops took some of his remains from Nanjing during WWII, and they are in Japan. It is also said that some remains were taken to India in the 1950s. Some ashes of his body are said to be in the pagoda at Xingjiao Temple.

What to see in Xingjiao Temple

The scnery in Xingjiao Temple with the Zhongnan Mountain and Fanchuan River is in a pleasant location. In ancient Fanchuan, it’s one of the Eight Great Temple, it looks very grand inside the temple because of it’s palaces and pagodas. The temple contains the Bell and Drum Towers, a front gate hall, a Mahavira Hall, a preaching hall, a meditation chamber, and monks’ dormitories.

You can pay a visit to the Mahavira Hall( Daxiongbaodian), where there is a bronze statue sits in the middle, which is the founder of the Buddhism, Sakyamuni. Also in front of it are three pagodas, the Xuanzang Pagoda is the famous among these pagodas. The Xuanzang Pagoda in the center of the cluster is a 13-meter-high, five-story structure with a statue of Xuanzang enshrined on the ground floor, a plaque tells his life story. The other two pagodas, they are same size in height, five meters, the pagoda of Xunzang’s disciples, Yuance and Kuiji. In back of the Sermon Hall has a palace, named Sleeping Buddha Palace, inside the palace is a state of Sleeping Buddha with length of 9 meters. On the west side of the temple is a pavilion, is a place to keep thousands of buddhisit scriptures about different dynasties.

The temple is in possession of more than 10,000 volumes of Buddhist canons, and many other precious cultural artifacts. A series of stone tablets in it are inscribed with the full text of the Diamond Sutra. It’s a famous buddhist site in China and  It’s an ideal tourist destination for Buddhist followers and those who worship the master Xuanzang.

How to get to Xiangji Temple

If you want to get out of the traffic and hassle of navigation, you can book a private tour package that includes visiting, dining and transfer from us. Our local guide and driver will escort you to the Xian Xingjiao Temple in the fastest and most convenient way and take care of all the details. You just have to focus on the visiting.