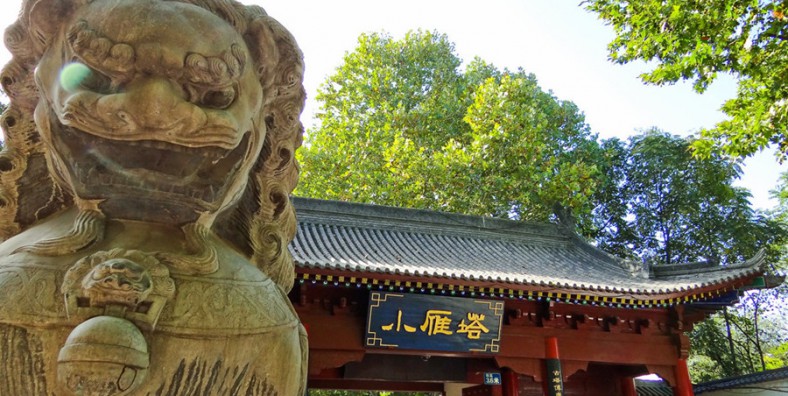 The Small Wild Goose Pagoda located inside the Jianfu Temple today was originally a 45-meter-high structure with 15 storeys. It was constructed in 707 AD in Tang Dynasty (618-907) to store the Buddhist sutras and objects that Master Yijing brought from India. It was named after "Wild Goose Pagoda" as well as the Big Wild Goose Pagoda due to the similar appearance and function.

It was called “Jianfu Temple Pagoda” during the Tang and Song (960-1279) Dynasties. Its present name is closely related to the “Giant Wild Goose Pagoda”.

In the Yonghui Period (650-655) under the reign of Tang Emperor Gaozong, “Wild Goose Pagoda” was built in the Da Ci’en Temple to store the sutras which the eminent monk Xuan Zang had brought from India to Chang’an, today’s Xi’an. In the Jinglong Period (707-710) under the reign of Tang Emperor Zhongzong, “Jianfu Temple Pagoda” was built in order to store the Buddhist sutras that Monk Yi Jing had brought from India.

The two pagodas were a symbol of Chang’an (Constant Peace) city. Xi’an (West Peace) was called Chang’an until the Ming Dynasty (1368-1644), when Beijing became the capital of China. Chang’an had served as the capital for ten dynasties.

Jianfu Temple was first built in 684 AD in honor of the second emperor of the Tang Dynasty, Emperor Lizhi (named Gaozong on his accession), on the hundreth day after his death. It was then named Xianfu (Dedicate Blessing) Temple, but renamed Jianfu Temple by Empress Wu Zetian. She won Lizhi’s favor as a concubine and siezed power after his death. Her ruthless reign interrupted the Tang Dynasty for a period of 15 years. The famous pilgrim Yijing, a great Buddhism translator at that time, once lived in Jianfu Temple to translate Buddhist scriptures that he brought back from India.

Small Wild Goose Pagoda was erected in the period 707 to 709 AD. It was named after its larger predecessor, Big Wild Goose Pagoda, five kilometers away. The building was originally a multi-eave, square-brick 45 meter-tall structure, with 15 storeys. A big earthquake in 1556 reduced it to the present 13 storeys. A crack opened from the top to the base and the upper two tiers toppled off.

Though the crack was later repaired, the top two storeys were never replaced. The 13-storey structure later suffered countless other earthquakes, yet it is still remarkably well-preserved. Inside the pagoda, there is a staircase that allows visitors access to the top.

In 1487, a violent earthquake occurred and caused the Small Wild Goose Pagoda to crack in the middle. The crack was over 0.33 meter (1.1 feet). In another violent earthquake in 1521, the crack disappeared and the two parts of the pagoda magically combined with each other overnight. People felt very confused and called it “Magical Combination”. The mystery was revealed during the restoration after 1949. The reason why the Small Wild Goose Pagoda can withstand dozens of earthquakes is that wise ancient craftsmen have formed its foundation as a hemisphere of rammed earth. In this way, pressure can be distributed evenly when an earthquake happens. Just like a never-fall doll, the flexible and stable pagoda can survive these storms and earthquakes.

The Morning Bell Chime of the Small Wild Goose Pagoda has been known as one of the “Top Eight Scenes of Xi’an” since ancient times. The original bell was built in the third year (1192) during the reign of the Emperor Zhangzong in the Jin Dynasty. It was installed in the Jianfu Temple and tolled every morning to pray for happiness in the Qing Dynasty (1644-1911). Now the bell hangs in the Bell Tower near the pagoda and a copy of it hangs in a steel frame in the open to be rung by tourists.

Inside the pagoda, a narrow wooden stairway winds its way to the top, requiring quite an effort by those making the ascent. Children and seniors with poor physical condition are not recommended to ascend. Additionally, it is hard for larger people to pass through the narrow stairway on the upper floors.

There is a small open platform on the top due to the missing two floors. Please be aware that it is very small, allowing only ten people at one time. For tourists successfully reaching the top, it is a special experience to have a bird’s eye view of the whole temple through the broken top. One can even see a panoramic view of the ancient city of Xi’an on clear days.

Structure of a Rectangular Pyramid

The Small Wild Goose Pagoda was built of blue bricks. Originally, it had 15 storeys, and measured about 45 meters (148 feet) in height. Because of numerous violent storms and earthquakes, the two upper storeys were destroyed. The existing 13-storey pagoda measures 43.4 meters (142.4 feet) in height.

The base of the pagoda is square, each side measuring 11.38 meters (37.34 feet). Beneath the pagoda there is an underground palace. The multi-eaves are made of overlapping bricks. The ground storey has two doors facing south and north respectively and other storeys have exquisite windows. The height and the side line length of every storey decrease progressively. So, the pagoda looks like a rectangular pyramid, with a beautiful design and perfect proportions.

How to get to Small Wild Goose Pagoda

If you want to get out of the traffic and hassle of navigation, you can book a private tour package that includes visiting, dining and transfer from us. Our local guide and driver will escort you to the Small Wild Goose Pagoda in Xi’an in the fastest and most convenient way and take care of all the details. You just have to focus on the visiting.

One thought on “Small Wild Goose Pagoda in Xian”