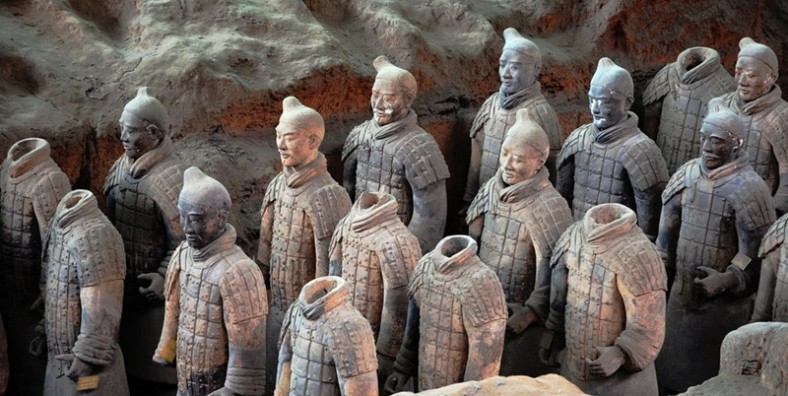 The Terracotta Warriors in Xi'an are a must-see. Find out all about the Terracotta Army: facts, how and why they were made, museum location, tours... The Terracotta Army was constructed to accompany the tomb of China's First Emperor as an afterlife guard. There are thousands of detailed life-size terracotta soldier models represent the guard troops of the first emperor — Qin Shihuang. They were molded in parts, fired, then assembled and painted.

Recommended Visiting Time: about half a day

Why is Terra-Cotta Warriors So Special？

Brief Introduction of The Terra-Cotta Warriors

The Terracotta Army is a collection of terracotta sculptures depicting the armies of Qin Shi Huang, the first Emperor of China. It is a form of funerary art buried with the emperor in 210–209 BCE with the purpose of protecting the emperor in his afterlife.

The figures, dating from approximately the late third century BCE, were discovered in 1974 by local farmers in Lintong County, outside Xi’an, Shaanxi, China. The figures vary in height according to their roles, with the tallest being the generals. The figures include warriors, chariots and horses. Estimates from 2007 were that the three pits containing the Terracotta Army held more than 8,000 soldiers, 130 chariots with 520 horses, and 150 cavalry horses, the majority of which remained buried in the pits near Qin Shi Huang’s mausoleum. Other terracotta non-military figures were found in other pits, including officials, acrobats, strongmen, and musicians.

In 221 B.C., Emperor Qin Shi Huang of the Qin dynasty established the first centralized feudal dynasty in China. After his death, he was buried at the northern foot of Lishan Hill in the east of Lintong County. The tomb has been reduced to half its size after 2,000 years of water and soil erosion, but still impressive – 76 meters high and a fundamental space of 120,000 square meters.

One unusual detail about the construction of the tomb is that the emperor had the building begin shortly after becoming king of Qin at the age of 13. This action contradicted Confucian wisdom that a son should demonstrate respect for his father by building as impressive a memorial as possible and that a man should never plan his own funeral rites. The tomb took 39 years and 700,000 workers to reach completion. It had pearls embedded in the ceiling to represent the stars, and rivers and lakes were modeled with liquid mercury. The tomb itself has not been opened yet.

There are four main categories of figures in this museum: chariot warriors, infantrymen, cavalrymen, and horses. There are generals, middle ranking officers, lower ranking officers, ordinary soldiers, and armored warriors. The latter can be further divided according to their headgear into warriors with a square scarf, a cylindrical bun, or a flat bun. There are kneeling warriors as well.

What to See inside the Terracotta Warriors and Horses Museum

Pit 1 is the largest and most impressive — the size of an airplane hangar. It is believed to contain over 6,000 terracotta figures of soldiers and horses, but less than 2,000 are on display. All the most impressive Terracotta Army pictures were taken in Pit 1.

All soldiers and horses face east in a rectangular array, each one either armed long spear, dragger or halberd. The vanguard appears to be three rows of infantry who stand at the easternmost end of the army. Close behind is the main force of armored soldiers holding weapons, accompanied by 38 horse-driven chariots.

Every figure differs in facial features and expression, clothing, hairstyle, and gestures, providing abundant and detailed artifacts for the study of the military, cultural, and economic history of that period.

Pit 2 – Uncovers the Mystery of the Ancient Army Array

Excavation and restoration is still ongoing at vaults two and three. Excavated in 1976, Pit 2 stands about 20 meters north to Pit 1. As the highlight of the whole mausoleum, it uncovers the mystery of the ancient army array. It consists of four units, measuring 94 meters east to west and 84 meters south to north and 5 meters deep., forming a 6000 sq. meter built-up area.

Vault Three is the smallest one. There are only 68 terracotta figures, many of which are without heads. It’s obvious that Vault Three represents the command post, as all the figures are officials.

How to get to Terra-Cotta Warriors

If you want to get out of the traffic and hassle of navigation, you can book a private tour package that includes visiting, dining and transfer from us. Our local guide and driver will escort you to the Terra-Cotta Warriors in Xi’an in the fastest and most convenient way and take care of all the details. You just have to focus on the visiting.

How to get to Terracotta Army from downtown Xi’an

How to get to Terracotta Warriors from Xi’an Airport

4 thoughts on “Terra-Cotta Warriors in Xian”