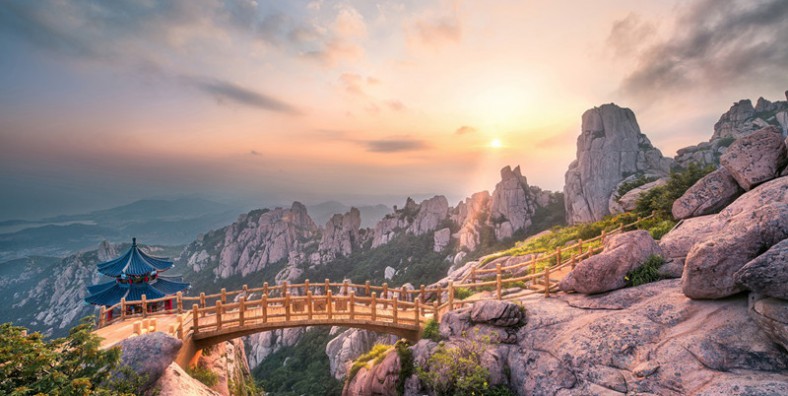 It is the highest peak on China's coastline and is known as the "first famous mountain" on the sea. There is an old local saying: "Mount Tai is not as high as Laoshan in the East China Sea, though it is cloudy."

Why is Mount Laoshan so Special?

Facing the Yellow Sea, Mt. Laoshan or Mount Lao is located to the east of Qingdao. This tall and majestic mountain is famous for its marvelous mountainous scenery and coastal landscape. It is regarded as the most recognized mountain of all mountains on the coast of China. It also holds significant importance in Taoism. Thus it is a must to see when traveling in Qingdao.

Where is Mount Laoshan?

Located in the eastern part of Qingdao, it was once called Laoshan, Laoshan and Aoshan in ancient times. It is the main mountain range of Shandong Peninsula. The highest peak of Laoshan Mountain is called Jufeng.

On the first line there are not only marvelous landscapes but also sacred Taoist Palaces. Significant points of interest include the Taiqing Palace, Xufu Islet and Longtan Waterfall (Dragon Pond Waterfall). The Taoist culture and temples of Mt. Laoshan are very famous. At the peak of Taoism, it was said that there were nine palaces, eight Temples and seventy-two nunneries. The number of Taoist had reached above one thousand. While later many buildings were destroyed, amongst those still remaining the Taiqing Palace is the largest. The Taiqing Palace also has the longest history of these buildings spanning more than two thousand years. Covering an area of 30,000 square meters (about 7 acres), the Taiqing Palace has 155 rooms. It has been well preserved and holds the typical architectural style of the Song Dynasty (960-1279) . This form of architecture is quite rare in religious architectures in China.

The second line mainly focuses on Beijiushui. The name Beijiushui derives its meaning from Laoshan Mountain that has nine crooks, thus making the river turn nine times. The river starts from the north side of the Ju Peak (the highest peak of Mt. Laoshan) and flows into the valley. So many beautiful things are on this line that it is called ‘the Jiushui Gallery’. At every corner, totally different sights can be found. The current here is rather swift while further on the river flows very slowly. The flowers, trees and odd rocks on both sides of the river emphasize the elegant beauty of the water. The most famous sight of Beijiushui is Chaoyin Waterfall. Du ring the rainy season the waterfall is quite majestic. The water crashes against the rocks, producing a huge sound similar to waves crashing against the seashore.

The third line includes the Taiping Palace, the Lion Peak, Huayan Temple, Naluoyan Cavern and other sights. Naluoyan Buddha Cavern is one such scene. It is located in the Naluoyan Hill to the east of Mt. Laoshan. It is a nat ural granite cavern 7 meters (about 23 feet) wide and 15 meters (about 49 feet) high. More than 100 people can stand inside at one time. Its structure is quite unique. The smooth walls and flat ground are just as they were pared. On the wall of the cavern protrudes a thin stone, like a Buddha niche. At the top of the cavern is a round and smooth hole. It was said that the hole was made by the supernatural power of Naluoyan Bud dha. Through this hole sunlight can enter thus lightening the whole cavern.