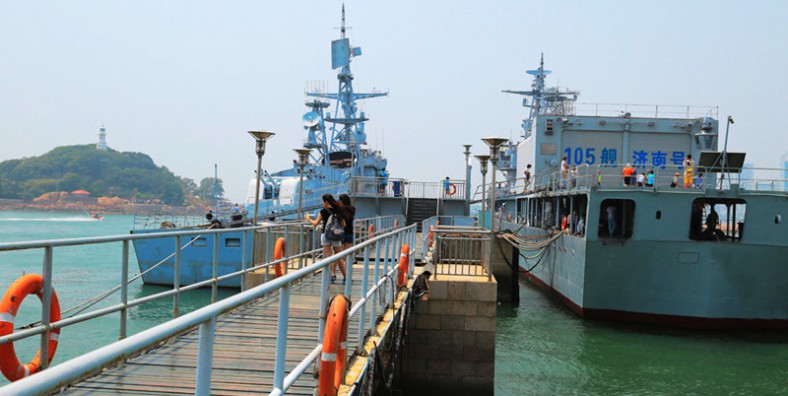 It is the highest peak on China's coastline and is known as the "first famous mountain" on the sea. There is an old local saying: "Mount Tai is not as high as Laoshan in the East China Sea, though it is cloudy."

Why is Qingdao Naval Museum So Special?

Where is Qingdao Naval Museum

Located at No.8, Laiyang Road, the museum sits on the gorgeous seashore. It lies to the west of the famous Lu Xun Park and faces Zhan Bridge across the sea.

Qingdao naval museum is a large professional military museum organized by the navy. It was set up in November 1988, officially opened to the public on October 1, 1989, officially listed in March 1993 and designated as Shandong’s national defense education base in March 1997.

Qingdao naval museum is a national patriotism education demonstration base and a 3A-level tourist attraction. In March 2005, it was rated as the first batch of 100 classic red tourist attractions by 13 ministries including the Central Propaganda Department, the National Development and Reform Commission, and the National Tourism Administration. In May 2008, it was rated as a Class I museum by the State Administration of Cultural Heritage.

Navy Uniform Exhibition Hall of Qingdao Naval Museum displays the uniforms, military insignia and special duty apparel of different periods since the founding of the Chinese People’s Navy in 1949. They reflect the process of modernization and normalization of the Naval Establishment. The dress uniform, office appliances and articles for daily use of Xiao Jinguang, the first commander of the navy, are also on display.

The Exhibition Hall of Presents

The Exhibition Hall of Presents in Qingdao Naval Museum shows more than 300 precious gifts which are a great feast for the eyes. Donated by the armies of over 60 countries, they attest to the diplomatic achievements of the Chinese People’s Navy. Many are the army emblems and naval vessel signs of foreign navies. Some of them are highly significant, such as a Russian naval officer’s sword presented by the Vice Minister of Russian Defense in 1957 and a gilt sword with black scabbard given by an American admiral in 1989.

The square of the court is the Weaponry Exhibition Area where ex-service weapons and equipment are on display. These are organized by category-naval vessel, aeroplane, guided missile, artillery, radar, underwater weapon, underwater tank and so on. Of the 150 exhibits, some are of crucial historical value since they served Chairman Mao, Premier Zhou Enlai, Xiao Jianguang and some international allies.

The Marine Exhibition Area, covering a water area of 4 hectares (10 acres), holds a retired destroyer, frigates and conventional submarines which had made great contributions in safeguarding the country.

1. Take Metro Line 3 to Renmin Huitang and leave from Exit 3, then walk south for 5 minutes to the museum.