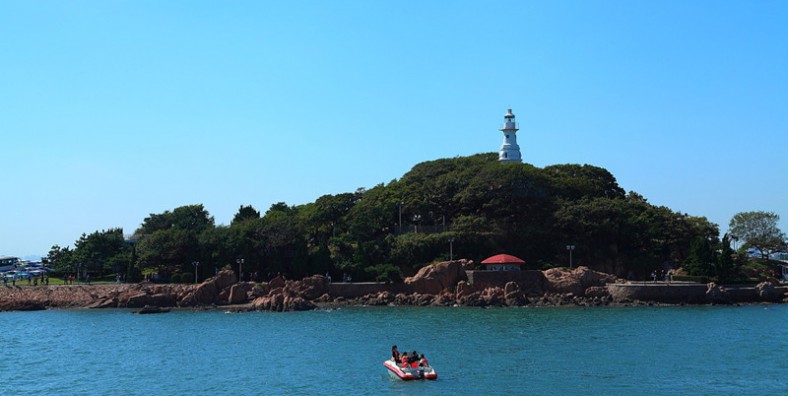 Small Qingdao covers an area of only 0.024 square kilometers and is 17 meters above sea level. Because of its shape like an ancient harp, it is also called "Qin Island".

Why is Little Qingdao Isle so Special?

Small Qingdao covers an area of only 0.024 square kilometers and is 17 meters above sea level. Because of its shape like an ancient harp, it is also called “Qin Island”. The island is 370 meters away from the east coast, with a long sea wall connecting with the land. The island was originally a part of the land, and gradually separated from the land under the erosion and carving of the waves for many years, forming the shape of today.

In the early 1940s, a “breakwater” was built on the east side to connect with the land. Later, some people regarded it as Qin, also known as Qin Island. In 1898, Germany rented Jiaozhou and built a lighthouse on the island. After liberation, the island has been used by the Chinese navy speedboat detachment and a lighthouse has been built on a large scale. the tower is now 15.5 meters high and has a white octagonal body. it is an important symbol for domestic and foreign ships entering and leaving Jiaozhou bay. When night falls, the red light on the tower and the light on the trestle bridge float on the blue waves, forming a wonderful picture. Therefore, “Qin Yu Piao Deng” is regarded as one of Qingdao’s top ten sights and one of Qingdao’s symbols.

In 1988, Little Qingdao was opened as a park and officially opened to the public. On the basis of planting mainly black pine, the island is also planted with flowering ornamental plants in spring, summer and autumn, such as cherry blossom, peach, pomegranate, hibiscus, crape myrtle, etc. In the relatively flat southern part of the island, there is a very small square, in the middle of which stands a sculpture of a harp woman holding an ancient harp and looking at the sea.

The most conspicuous sight of Little Qingdao is a white cone-shaped lighthouse standing at the top, which is an important navigation mark for ships passing through the sea to enter and leave Jiaozhou Bay. The lighthouse was built by the Germans in 1900 and opened in 1915.

There used to be many rare yellow lilies on the island. When in full bloom, they smell fragrant and are very gratifying. They are a kind of flower type well-known in the international plant community. The Germans call them “Qingdao lilies”.

Unfortunately, because of the increasing number of visitors, lilies are now nowhere to be found. As early as the early 1930s, little Qingdao was turned into a park with tea halls, flower beds, stone benches and chairs, and roads and yachting docks. In the summer of 1988, little Qingdao was turned into a park again, and after re-planning and construction, it became another tourist attraction in Qianhai.

Legend has it that long ago, a fairy who played the piano fell in love with a young man who was fishing. She quietly came to earth and married the young man. Whenever her husband goes to sea, she sits on the island playing the piano and uses it to guide her lover. When the jade emperor learned that he wanted to catch the harp girl and return, the harp girl remained faithful to her love and showed partiality to the island. the sound of the harp still lingers around the island. The ancient fairy tale is poignant and beautiful, touching generations of artists. In memory of the harp girl, they used their imagination to make a sculpture of the harp girl with smooth lines and vivid images. In 2002, a miniature version of “Qin Nu”, based on the sculpture of Qin Nu, was designated as a symbol of Qingdao by the Qingdao municipal government as a gift to friends at home and abroad.