May Fourth Square in Qingdao 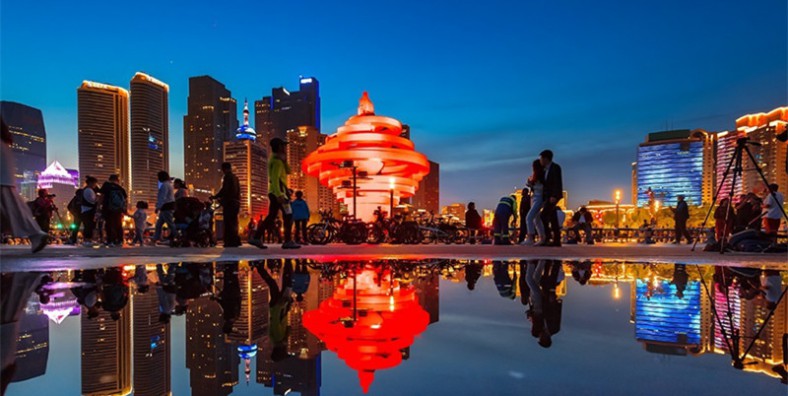 The May 4th Square was named after Qingdao as the fuse of the great May 4th Movement in modern Chinese history.

Why is May Fourth Square so Special?

Named after the May 4th Movement, it is Qingdao’s most iconic central square.

Backed by the municipal government building, facing Fushan bay in the south and 700 meters long in the north and south, it is a modern square integrating lawn, fountain and sculpture.

The May 4th Square was named after the May 4th Movement. As we all know, the great anti-imperialist patriotic movement that broke out in 1919-“the may 4th movement” was triggered by Qingdao’s sovereignty issue. In November 1918, the First World War ended. In January 1919, at the “Peace Conference” in Paris, France, China, as a victorious country, attended the conference and put forward legitimate demands such as recovering Qingdao’s sovereignty. However, Britain, France, the United States, Japan and other countries refused and forcibly transferred Qingdao’s sovereignty to Japan. News came that the whole country was shocked. Beijing students held a demonstration on may 4, demanding strongly to refuse to sign the contract and shouting slogans such as “fight to the death for Qingdao’s sovereignty”, “give me Shandong, give me Qingdao” and so on. The patriotic behavior of the students was supported by the whole nation. Amid opposition from the whole nation, the Beiyang government of China was forced to refuse to sign at the Paris Peace Conference, smashing Japan’s plot to permanently occupy Qingdao. Under the heroic struggle of the Chinese people, Qingdao’s sovereignty was finally recovered on December 12, 1922. In view of the special relationship between Qingdao and the may 4th movement, the Qingdao municipal party Committee and government decided to name the newly-built square the may 4th square.

Main Attraction of May Fourth Square

The May 4th Square is mainly decorated with four-season evergreen cool-season lawns and other plants forming large colored flower bands, which are integrated with the main sculpture and the natural environment of the sea and sky. This place has become a landmark of Qingdao in the new century.

The iconic sculpture “the wind of may”, with a spiralling wind and a fiery red shape, embodies the patriotic tone and national strength of the may 4th movement against imperialism and feudalism. Here has become one of Qingdao’s landmark landscapes in the new century. Around the square and between the lawns are all kinds of exquisite mouth-tip patterns made of Qingdao high-quality granite, and a circular fountain is designed in the center. The square is flanked by high-rise buildings on the east and west sides of the funeral hall.

After crossing Donghai Road, you will come to Binhai Park in the southern district of Wusi Square. The piazza consists of a semi-circular four-level spectator stand and a circular outdoor stage. The basement under the stage is the office and the main control room of the May 4th Square. During holidays and major events, various performances will be held on the outdoor stage.

At first glance, a square flat ground is just a common stone square, but actually there are nine rows vertically and horizontally, totaling 81 underground fountains, which can be sprayed according to different shapes and heights. It is one of the favorite sightseeing items for tourists, especially children.

Take No.318 bus to the side door of the terminal city government and walk south for about 5 minutes.