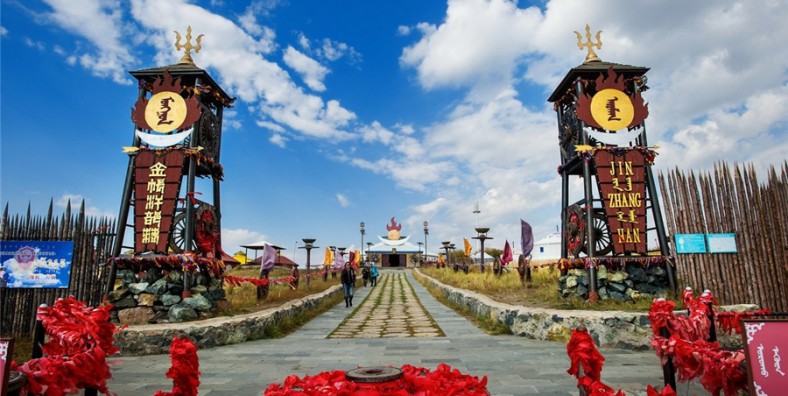 Golden Horde Mongolian Tribe is the only nomadic tribe open to the tourists, a reproduction of the camping tents in Genghis Khan's time. It is located in the heartland of Hulunbuir Grassland, on the banks of Moergele River that is hailed as China's first Qushui (River bends).
English Name: Golden Horde Mongolian Tribe
Chinese Name:金帐汗蒙古部落
Ticket Price: 20 RMB
Best Time: June to September
Recommended Visiting Hours: 1 Day
Address:  In the middle-west of Hulunbuir Prairie

Golden Horde Mongolian Tribe, located in the heartland of Hulunbuir Grassland, is 37km to the north of Hailar District of Hulunbuir city. It is the only nomadic tribe which opens to tourists, a reproduction of the camping tents in Genghis Khan’s time.

The Golden Horde, located in the middle-west of Hulunbuir Prairie, is a nomadic Mongolian scenic spot. This area is a herd grazing pasture from times of old. Between the end of the 12th century and the early 13th century, Genghis Khan united all tribes and occupied Hulunbuir Prairie. The layout of the Golden Horde is a replica of Genghis Khan’s own tent. The Golden tents are their signature housing on the move, including Khan Shatyr, military tents and for noblemen.

Hulunbeier has the features of grassland weather with big temperature difference between day and night. Different seasons at Hulunbuir present different landscapes and sceneries.

How to Get to Hulunbuir

Hulunbuir Dongshan International Airport, the nearest airport to the grassland, is in the Hailar District of Hulunbuir City. The distance between the airport and the grassland is about 150 km. You can hire a driver to take you to and from the grassland.