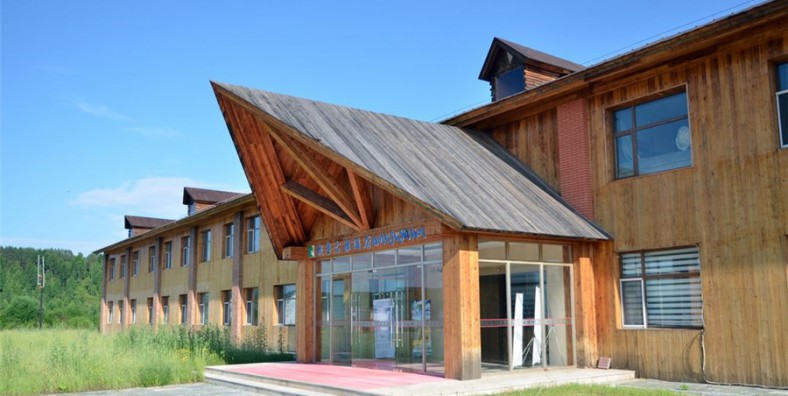 The township has a population of over 1450 people and among them there are over 200 Ewenki people. “Aoluguya” literally means “an area of dense forest” in Ewenki ( Evenki ) language. “Ewenki or Evenki” has the meaning of “people who live in forested mountains”.
English Name:
Aoluguya Ewenke National Township
Chinese Name: 敖鲁古雅鄂温克民族乡
Best Time: All year round
Recommended Visiting Hours: 1 or 2 days
Address: 4km to the west of Genhe City, next to the National Highway No.301 and 255km to the northeast of Hailar.

Aoluguya Ewenki Ethnic Township is located in the forested mountains, 4km to the west of Genhe City, next to the National Highway No.301 and 255km to the northeast of Hailar.

At the end of 1957, the name of the tribes of Ewenki people was recovered and unified as “Ewenki”. In 1965, the Ewenki people began to move from the forested mountains and settled down by the Aoluguya River. The Aoluguya’s local ecomony has developed from the single hunting or herding to the multi-economies including indutry, agriculture, animal husbandry, trade and commerce and tourism etc.

Ewenki Ethnic people are a group of ancient minority with a long histry. They used to live and hunt in the forested mountains and live on hunting and raise reindeers. Now they have walked out of the deep forsted mountains on to the pastoral area and and the farmland. The historical study shows that in history there were three sub-groups of Ewenki people – Suolun, Tonggusi and Yukute. Suolun people belongs to farming tribes, Tonggusi nomadic tribes and Yukute is the famous tribe of Reindeer. The township has a population of over 1450 people and among them there are over 200 Ewenki people. “Aoluguya” literally means “an area of dense forest” in Ewenki ( Evenki ) language. “Ewenki or Evenki” has the meaning of “people who live in forested mountains”.
For more than 300 years, this unique ethnic minority has considered the reindeer hunting and herding in forests as a key source of livelihood, and as a symbol of unique identity of the Reindeer Evenki. However, in 2003, as China called for “ecological migration” to better protect the forests along the Greater Khingan Range, the Aoluguya local government undertook resettlement of the Evenki and their reindeer 260 km southwards to a new Aoluguya township, the western suburb of Genhe City. The hunters were asked for their guns back for the compliance of the hunting ban. The herders compromised on the reindeer to be hand-fed and kept permanently in enclosures near the settlement. Some Evenki people began to accept new modern life, but their traditional culture is fading, their own language is being forgotten, and the hunters are also becoming farmers gradually. Nevertheless, there are some traditional Evenki people still trying to return to forests, and now herders have to rotate seasonally between the new settlement where they are officially supposed to live and the hunting campsites where they herd reindeer. Therefore, the new phenomenon formed: “settling but not living”.