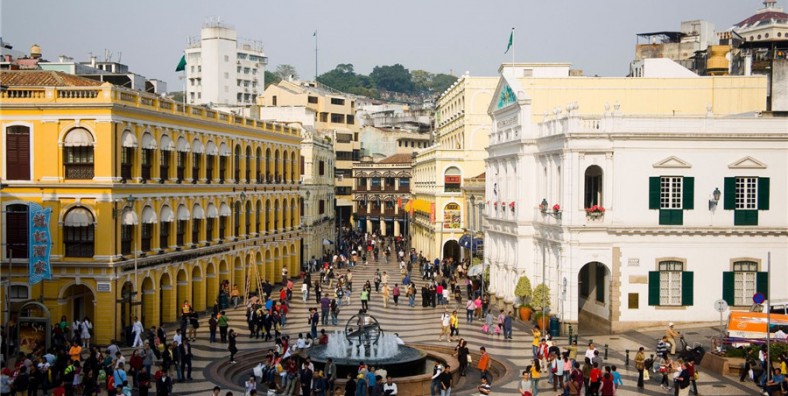 Senado Square (Largo do Senado) is located in the central area of Macau Peninsula, in Macau Special Administrative Region, China. This square covers an area of 3,700 square meters. As one of the top four squares in Macau, it was listed into the World Heritage Sites as part of Historic Centre of Macao. Now it is enclosed by the buildings of the Leal Senado, the General Post Office, and St. Dominic’s Church. The square is paved in the traditional Portuguese pavement.

Why is Senado Square in Macau So Special?

Located in central Macau Peninsular, Senado Square (in Portuguese: Largo do Senado) is commonly known as Fountain. Covering an area of 3,700 square meters, it is a main city square of Macau. It was inscribed on the UNESCO’s World Heritage List as part of Historic Centre of Macau in 2005. Walking along the Largo do So Domingos to the Avenida de Almeida Ribeiro, visitors find one of the most well-known and prosperous business and cultural center of Macau, namely the Senado Square. Located just opposite to the Government House (Leal Senado), the Senado Square is wave-like tiled with small black and white stones, reflecting Portuguese’s “maritime complex”. The tiled road extends to St. Dominic’s Church and Ruins of St. Paul’s. The whole square is in a shape of funnel, getting narrower as you go further.

The square is so named as since Ming Dynasty (1368-1644) it has been in front of the Leal Senado Building. During the era of Portuguese control this is where the local authorities used to review the troops on their inaugurations. In 1940, there was a statue of a Portuguese soldier named Mesquita in its centre. He was responsible for the deaths of many Chinese soldiers during the hostilities with the Qing Dynasty (1644-1911). Understandably, the statue has been destroyed by Chinese people and replaced by a fountain; this is why the square is also called “the Fountain”.

In the early 1990s, the authority hired some Portuguese experts to pave the Senado Square with a wave-patterned mosaic of colored stones. From then on this area has become a popular place for cultural activities in Macau. The buildings around the Senado Square have a long history and have many western features, so they have been well protected by the authority and no one is allowed to alter the facades of these buildings.

Must-See Buildings Around the Square

The notable attractions of the square are its old buildings. But there are also notable Chinese herbal medicine stores just to the north of St. Dominic’s Church that offer a good value in terms of quality, price, and selection. The square is actually shaped more like a triangle with St. Dominic’s Church sitting at the apex and San Ma Lo (Av. de Almeida Ribeiro) forming the base. The wavy black and white tile pattern gives a dreamy feeling.

This square contains three buildings to note that are on the Historic Center of Macau UNESCO World Heritage list of about 20 buildings and several plazas: Leal Senado, Holy House of Mercy, and St. Dominic’s Church. Also of note is the old Post Office is the first building on the plaza on the right side.

The Leal Senado Building is on the other side of the San Ma  Lo Road from the plaza. It is the old senate building and dates from 1784.

The Holy House of Mercy

The Holy House of Mercy is on the right side of the triangle.

St. Dominic’s Church sits at the apex in its own little plaza. You can’t see St. Dominic’s Church from San Ma Lo Road, so you’ll have to walk to it. It is presently open from about 10 am to 6 pm daily. It is listed 13th of Things to Do in Macau on TripAdvisor. It was built in 1587 by Dominicans and is the oldest church building in Macau.

Around the Square, there are other attractions. To the east of the square, there lies the Macau Cathedral. At the end of the paved road, there is the St. Dominic’s Church. On the third floor of the church there is a museum of paintings, sculptures and liturgical ornaments that illustrate the history of the Roman Catholic Church in Asia. Walk to north of the church and you will arrive at the Ruínas de S. Paulo (Ruins of St. Paul’s). This is the most famous landmark in Macau. Right at the east of the Ruínas de S. Paulo is the Museu de Macau (Macau Museum), in which historical relics of Macau are exhibited. The Lou Kau Mansion is located to the northeast of the square. Walk to the southeast along the Av. De Almeida Ribeiro (San Ma Lo) from the square, and you will find the Casino Lisboa, a famous casino in Macau.

How to get to The Senado Square

If you want to get out of the traffic and hassle of navigation, you can book a private tour package that includes visiting, dining and transfer from us. Our local guide and driver will escort you to Senado Square in Macau in the fastest and most convenient way and take care of all the details. You just have to focus on the visiting.