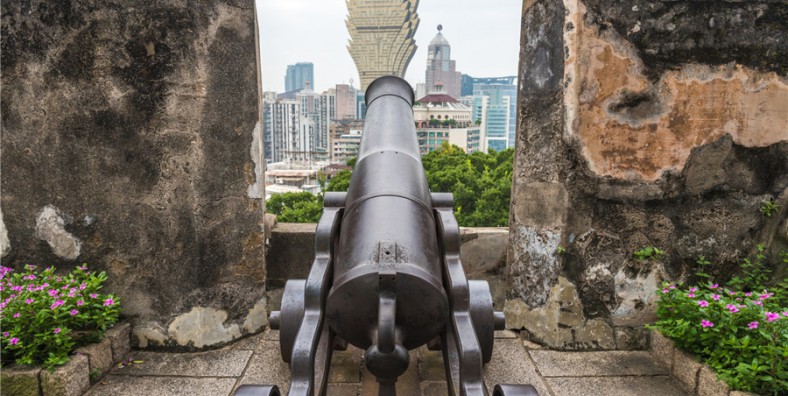 Fortaleza do Monte (Portuguese for Mount Fortress, also Monte Forte; officially Fortaleza de Nossa Senhora do Monte de São Paulo, in English: Fortress of Our Lady of the Mount of St. Paul) is a fort in Santo António in Macau SAR, China. It is the historical military centre of Macau. The Fortaleza forms part of the "Historic Centre of Macau" and is a UNESCO World Heritage Site.

Why is Monte Fort in Macau So Special?

Monte Fort is an ancient monte forte in Macau, one of the part of China’s oldest Western-style fort buildings. Built in the 16th century by the Jesuits and later used as a center base of gravity of the military defense facilities in old times, and now it is part of the Historic Center of Macau and one of main attractions in Macau. Macau Fortaleza do Monte is located in the side of the Ruins of St. Paul. Around the forte, there is giant steel gun which has lost its military role but become testimony of Macau’s old relics and history.

Monte Fort is an almost-400-year-old, 100-by-100-meter stone fort, with superb sunset and casino views from the top. Together with Macau Museum inside, Monte Fort, a UNESCO World Heritage Site, is generally considered the premier historical attraction for tourists in Macau. The top battlements on the 9-meter-high walls are a great place to see the shimmering casino lights of mainland Macau and the colors of sunset. If the weather is right, the scenery is quite beautiful at dusk.

History of Monte Fort in Macau

Monte Fort was built by the Jesuits between 1617 and 1626. Walls enclosed quarters for soldiers and storehouses. Large cannons were set along the top battlements.

The fort was designed to survive a two-year siege, but the cannons were used in battle only twice. It is said that a miraculous shot fired accidentally by a monk hit a Dutch ammunition ship. The resulting explosions damaged the nearly victorious Dutch fleet so badly that they retreated.

It remained a military base until 1965 when a weather station was built there. The weather station building was removed by the then Macau Government between 1996 and 1998 and replaced with today’s Macau Museum.

The fort, the remains of St. Paul’s, and the Senado Square are part of the Historic Center of Macau UNESCO World Heritage site.

Heritage walk: You could take a half-kilometer walk from Largo do Senado Square on San Ma Lo Street and see the main attractions of the World Heritage sites during your walk and the local scenery, and you could visit the tourist shops along the way.

See the remains of St. Paul’s Cathedral (1627), and then walk up all the stairs to the top or take the escalator to the museum.

How to get to The Monte Fort

If you want to get out of the traffic and hassle of navigation, you can book a private tour package that includes visiting, dining and transfer from us. Our local guide and driver will escort you to Monte Fort in Macau in the fastest and most convenient way and take care of all the details. You just have to focus on the visiting.