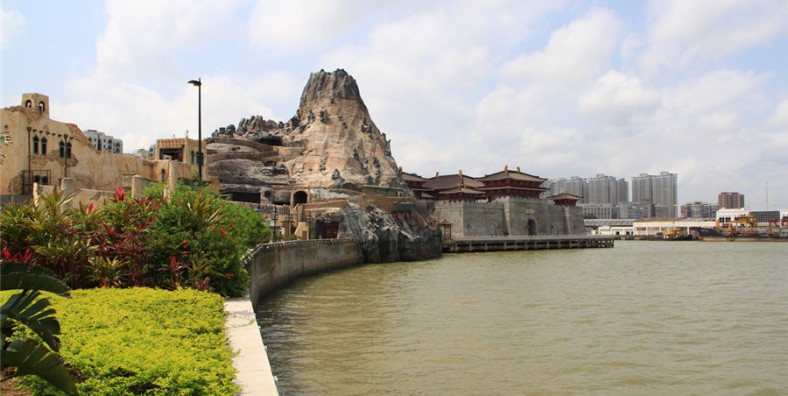 Recommended Visiting Hours: about half a day

Why is Fisherman’s Wharf So Special?

Near Macau Maritime Terminal, Macao Fisherman’s Wharf is Macau’s first theme park as well as a shopping center modeled on Euramerican fisherman’s wharfs. It has an area of over 111,500 square meters (about 28 acres), of which 40 percent is reclaimed from the sea. It was invested in by Ho Hung San (One of the top 10 billionaires in the Hong Kong-Macau region through running his gambling business) and Chow Kam Fai (a Macau entrepreneur in the tourism, entertainment and gambling industries). The total investment in the project is about MOP1.9 billion. The wharf was inaugurated on December 31st, 2005, in the presence of Ho Hau-wah, the chief executive of Macao, and Ho Hung San. On December 23rd, 2006, it was opened to the public formally. Now, it is rapidly emerging as a popular attraction.

Dynasty Wharf is composed of many Chinese towers, which are built in the imitation of the Tang-style.

Legend Wharf is equipped with all kinds of recreational facilities, such as a High-tech Games Center, Water Performance Arena and a Video Games Center.

Featuring everything from clothes to jewelry to home furnishings, some of the world’s most desirable brands can be bought here. Situated by the Hong Kong ferry terminal many Chinese and expats hop over to escape the hustle and bustle, using the Wharf as a place to do some duty-free shopping and take in some of the entertainment.

Also featured is Vulcania, a 40-metre high replica volcano which erupts every evening and inside of which the River of Fire white-water and Dragon Quest rollercoaster rides are housed. The exterior of Vulcania includes walkways styled on the Potala Palace in Lhasa, Tibet. Also featured at this extravagant park is Aladdin’s Fort, a Middle-Eastern fort which features a variety of kid’s funfair rides, a Roman-themed shopping centre, Roman Amphitheatre a 2,000-seat Colosseum where the crowds take in the glossy shows and concerts. There is also a convention centre as well as a Vasco da Gama Waterworld – a performance venue for water-based shows including four daily jet-ski performances.

How to get to The Fisherman’s Wharf

If you want to get out of the traffic and hassle of navigation, you can book a private tour package that includes visiting, dining and transfer from us. Our local guide and driver will escort you to Fisherman’s Wharf in Macau in the fastest and most convenient way and take care of all the details. You just have to focus on the visiting.

It is quite convenient to come to Macau Fisherman’s Wharf by public transport or free shuttle buses. Bus Route No. 1A, 3, 3A, 8, 10, 10A, 10B, 12, 28B, 28BX, 28C, 32, AP1. There are some free shuttle buses traveling between Sands Macau Hotel Casino and Macau Fisherman’s Wharf. In addition, taking a taxi would be the most comfortable and convenient way.