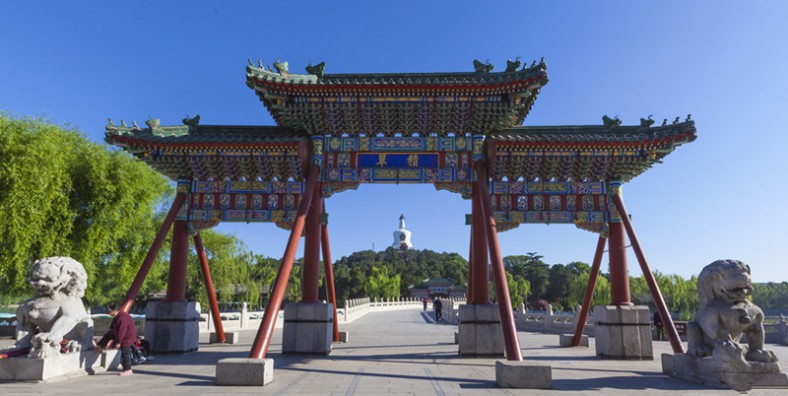 Why is Beihai Park so Special?

Beihai Park, located in the center of Beijing City, is the oldest, best preserved and most culturally deposited classical royal garden in China’s existing history. The vast waters are extremely rare in Beijing. The evening is the best time to go boating in the garden. You can watch the imperial buildings, sit by the lake and talk to the old people around you about the royal unofficial history.

During the six to thirty-six years (1741-1771) of Hongliganlong, Emperor Gaozong of the Qing Dynasty, large-scale repairs and additions were made to Beihai. After 30 years of continuous construction, many pavilions, terraces, halls and pavilions were built. The Qing Dynasty introduced the essence of Jiangnan gardens, literati freehand brushwork and landscape gardens into the royal palace.

In 1900, the Eight-Power Allied Forces invaded Beijing and the Beihai was trampled upon. Other treasures in the garden were looted.

After the Revolution of 1911 overthrew the Qing Dynasty, Beihai Park was closed for more than 10 years. The garden building was only officially opened as a park on August 1, 1925 after minor repairs.

In 1961, Beihai Park was announced by the State Council as the first batch of national key cultural relics protection units.

The Qing Dynasty inherited the Xiyuan of the Ming Dynasty and carried out a large-scale reconstruction of Beihai during the Ganlong period, which laid the foundation for the scale and pattern thereafter.

Beihai Park is located in the central area of Beijing City. It is mainly composed of Beihai Lake and Qionghua Island. It covers an area of 68 hectares, including 39 hectares of water and 29 hectares of land. This was originally the imperial “forbidden garden” of the Liao, Jin, yuan, Ming and Qing dynasties, with a history of thousands of years.

At the top of Yuhua Island, the white Dagoba was built in 1651 on the site of the Moon Palace where Kublai Khan received Marco Polo. At the suggestion of a famous Tibetan Lama the emperor shunzhi, the first emperor of the Qing Dynasty agreed to build such a Tibetan grand tower to show his belief in Buddhism and his desire for the unification of all ethnic groups in China. White dagobah was destroyed and rebuilt twice in the earthquake. Now, it sits on a huge stone base, 120 feet (37 meters) high, with two bronze umbrella canopies on top and 14 bronze bells hanging around. Inside, dagobah keeps Buddhist scriptures, monks’ cloaks, alms bowls and two sarira. Because the white tower is its highest point, it is a favorable position to see the whole scenery.

Haopuxi Garden was built in 1757 and is one of the best existing royal gardens in China. “Hao” and “Pu” are the ancient names of Anhui’s two rivers. There is a story like this: during the Warring States Period (475-221 BC), Zhuang Zi and Huizi (two famous ancient Chinese philosophers) argued on the Haohe Bridge. Zhuang Zi said: “How happy are the fish in the river!” Huizi replied, “You are not a fish. “How do you know if this fish is happy?” Zhuang Zi replied, “You are not me. How do you know that I don’t know the happiness of fish? This story inspired Emperor Ganlong to build Haopuxi Garden and to seek happiness and relaxation as freely as fish in the river. Therefore, this garden is designed for peace and happiness. It is characterized by a special landscape structure, giving people the impression of a deep valley and keeping people away from society.

After visiting the east coast region, go west and you will reach the north coast region. Quiet Heart Studio is located in the east of this area and is one of the most famous independent gardens. It was originally built in the Ming Dynasty (1368-1644) and expanded in the Qing Dynasty. There are many magnificent palaces, halls, pavilions, towers, corridors and artificial hills in the studio, as well as numerous grotesque porous rocks and stones, all of which are arranged artistically. During the Qing Dynasty, some members of the royal family had a rest or study here.

To the northwest lies the well-known Nine-Dragon Screen, which is the only screen having nine huge dragons on both sides among the most famous three Nine-Dragon Screens in China (the other two are respectively in the Forbidden City and Datong, Shanxi Province). Built in 1756, the Nine-Dragon Screen is about 90 feet (27 meters) long, 21.8 feet (6.65 meters) high and 4.7 feet (1.42 meters) thick. It is composed of 424 seven-color glazed tiles that embossing the screen. There are nine huge coiling dragons on each side of the screen and big or small dragons in different postures decorating the two ends and the eaves, making a surprising total of 635 dragons. Even after 200 years, the Nine-Dragon Screen is still bright in color and complete in appearance, showing the high techniques of Chinese arts and crafts in ancient times.

Since 2004, Beihai Park has held a New Year’s Prayer Cultural Festival from the 26th of the twelfth lunar month to the 7th of the first lunar month every year to create a festive and peaceful atmosphere in the whole park for greeting blessings in wonderland, praying in blessing temples and celebrating blessings in prosperous times, so as to satisfy people’s good wishes for blessing in the new year.

Chrysanthemum originated in China and has a long history in China. The steadfast character of chrysanthemum Ao Shuang is deeply appreciated by the Chinese nation, which is not afraid of violence and advocates high purity.

After the completion of the People’s Republic of China, Beihai Park Management Office has vigorously cultivated flowers to beautify the garden, and the flower cultivation in the park has developed rapidly. From 1954 to 1963, the park held many flower exhibitions. The capital’s chrysanthemum industry is in a period of rapid development, with chrysanthemum varieties increasing year by year.

Other famous spots in Beijing

2 thoughts on “Beihai Park in Beijing”