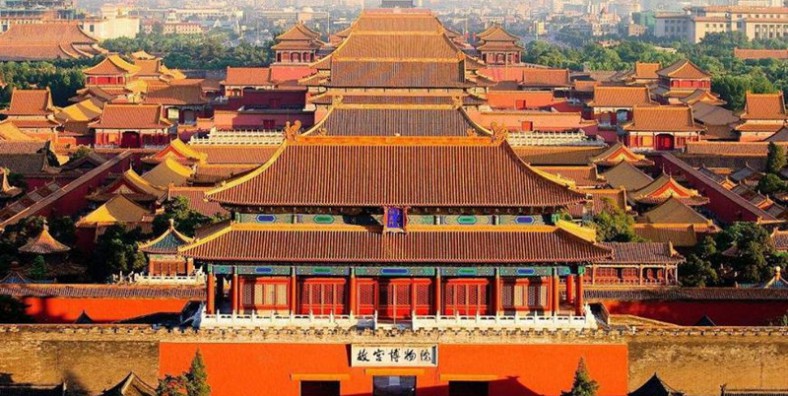 Why is Forbidden City so Special?

Forbidden City (紫禁城), officially called Gugong (故宫Chinese name), was the imperial palace for 24 Emperors of Ming and Qing Dynasties until the overthrow of Qing Dynasty, now is open to the public as the Palace Museum. As the highest power center over five centuries, ordinary people were forbidden from even approaching the palace wall without a price of instant execution (hence its name).

Following the order of Emperor Yongle (Zhudi朱棣, third Emperor of Ming Dyansty), Forbidden City was constructed from 1406, the fourth year of his reign. 14-years hardworking by one million civilian workers presented the largest ancient imperial architecture complex, 72 hectares area with 8703 rooms, all were wooden structures decorated with yellow glazed tile roof and bluish white marble base.

After the completion of the Forbidden City, the palace of Ming and Qing dynasties has a history of more than 500 years, including the activities of emperors, hierarchy, power struggle, religious sacrifice, etc.

The Palace Museum was officially established and opened to the public on October 10, 1925.

On the eve of the full-scale outbreak of the Anti-Japanese War, in 1933, in order to protect its cultural relics from being destroyed by the war or plundered by Japanese imperialism, the Palace Museum decided to take the policy of fleeing the enemy to the south and set up a cultural relics warehouse in Nanjing and a Nanjing branch of the Palace Museum.

The Layout Map of Forbidden City The quadrate Forbidden City stretches 960m from south to north and 750m from west to east, covering an area of 72 hectares, as large as 101 football fields. 8703 rooms in total, all were wooden structures decorated with yellow glazed tile roof and bluish white marble base. Enclosed by a four stories high city wall, which is surrounded by a 52m moat, the strongly fortified castle has one gate in each direction, and each corner of the quadrate is equipped with a delicate turret. To emphasize the supremacy of the emperor, according to ancient imperial capital’s construction principle, ceremonial halls for emperors to handle state affairs (outer court), imperial living quarters (inner court) and imperial garden are aligning from south to north along the central axis of Forbidden City (the same axis of Beijing City). Other buildings, like living palaces for emperor’s father and the former emperor’s concubines and palace for Buddha worship are located on the both sides of the axis. Forbidden City is so large that you can spend all day to wander around the palace. However, most people have limited time to savor the beauty of it, hence, it’s very important to choose a classic as well as time-saving visiting route. Visiting along the central axis of Forbidden City is the best route which will only take about 2 hours. Besides feasting on the splendid palatial architecture, you will also have opportunity for one of the exhibitions along the central axis if you are a fast walker.

This route starts from Meridian Gate. After entering the Meridian Gate, visit the outer court, inner court, imperial garden in turn, and exit form Gate of Divine Might at last. Meridian Gate (午门), the front door (southern door) of Forbidden City, will be reached through the Gate of Heavenly Peace (Tian’anmen 天安门, lying north of Tian’anmen Square). This is the best place to show the majesty of the empire, where the monarch would issue imperial edict and next year’s calendar, pardon the prisoner of war. It’s also the punishment place for court officials. Passing through Meridian Gate, across the Golden Water Stream, you will reach the gate of the outer court – Gate of Supreme Harmony (太和门).

Outer Court was places where the emperors held important ceremonies and exercise their power. There are three main halls in the outer court. First one is the Hall of Supreme (太和殿), the largest and most spectacular architecture in Forbidden City and once used for new emperor’s accession and other grand ceremonies, like emperor’s birthday and wedding ceremonies. Next is the Hall of Middle Harmony (中和殿), the transitional palace for emperor to rest and rehearse etiquettes for the ceremonial events held in the Hall of Supreme. The last one is the Hall of Preserving Harmony (保和殿), once used for state banquet in the New Year’s Eve and Lantern Festival, and for palace exam to select the top 3 of imperial exam. Don’t miss the 16.57m pavement behind the hall, which was made of a chunk of 200 tons white marble, and carved with dragons, sea water and clouds. Step down from the white marble base at the rear of the Hall of Preserving Harmony, a wide courtyard separates the outer court from inner court.

Inner Court was once the imperial living quarters and the work place for the emperors. The door of the inner court is the Gate of Heavenly Purity (乾清门), where the officials waited for the military and administrative decisions from the emperor. Through the gate, the Palace of Heavenly Purity (乾清宫) will reveal its true face to you. 14 Ming and Qing Emperors had lived in here and handled state affairs. Keep walking north and you will arrive the Hall of Union (交泰殿), famous as the Empress coronation room in Qing Dynasty. The northernmost palace is the Palace of Earthly Tranquility (坤宁宫), frequently appearing in Chinese palace TV series, was known by the public as the bedroom for the empress in Ming Dynasty. Imperial Garden (御花园) is located at the north of inner court. Slight small than 2 football fields, the garden was the pleasure ground for the emperor and his harem. Verdant pines, cypresses and bamboos were dotted with artificial hill and rock, formed an evergreen landscape architecture in Forbidden City.

Notice: if you have enough time, you can visit the exhibition of Qing Imperial Birthday Celebrations, located at west corridor rooms to the south of the Palace of Heavenly Purity. The exhibition consists of the grand celebratory spectacles for three Qing emperors and two empress dowagers, including the Kangxi Emperor (康熙皇帝 r. 1662-1722), the Qianlong Emperor (r. 1736-1795) and the Empress Dowager Cixi (慈禧太后 1835-1908). For those who are willing to spend more time in the Forbidden City and are crazy about the museum items, there are more places waiting for your exploration. Generally speaking, besides the central line spots, the rest of the Forbidden City can be divided into four parts:

Hall of Martial Valor (武英殿): located in the west of the Gate of Supreme Harmony (west of the outer court), now is changed into Painting and Calligraphy Gallery and exhibits representative painting and calligraphy works from every historical period;

Hall of Literary Brilliance (文华殿): located in the symmetrical position of the Hall of Martial Valor, exhibit ceramics through past dynasties. Six Western Palaces (西六宫): refer to six palaces in the west of the inner court, and they are all presented in their original forms. The Six Western Palaces were once residential area for the emperor’s concubines, and visitors can watch the original living scene of the royal family.

Eastern Exhibition Area: in the eastside of the Forbidden City (east to the inner court), there are several permanent exhibitions worthy your time. Collections exhibited in the Treasure Gallery, Hall of Clocks, Gold and Silver Gallery, Bronze Gallery represent the priceless art history of China.

Normally, it’s suggested to visit the Hall of Martial Valor or Hall of Literary Brilliance first, then the outer court and inner court, and last, visit the Western Palaces or the Eastern Exhibition Area. Where is Forbidden City – Location Forbidden City is rightly located at the center of Beijing City, very close to Tiananmen Square. You could easily find it and get there by taxi, subway, bus, bicycle, etc.

If you go there by subway, you could take the metro line 1 to get off at Tiananmen East Stop (天安门东), walking about 900 m, and then enter Forbidden City form the Meridian Gate.

If you want to get rid of hustle of public transportation and troublesome navigation, you can book a private tour package which covers sightseeing, dining and transfer from us. Our local tour guide and driver will escort you to Forbidden City with speed and convenience, and take care of all the details. You just need to focus on sightseeing.

Treasure Gallery and Hall of Clocks will charge extra 10 yuan to visit.

Since the visiting time is normally over 2 hours. It’s advised to wear comfortable shoes when visiting.

Though the Museum has four gates, visitors can only enter it through Meridian Gate and exit from the Gate of Divine Might or Donghua Gate.

It’s suggested to bring some snacks into Forbidden City, for the food sold in it are expensive and the taste is really not good. You can find a good restaurant outside the Forbidden City after the tour.

The winter of Beijing is very cold, normally below zero. However, there are fewer visitors in winter time, and the snowy Forbidden City is definitely a breathtaking view.