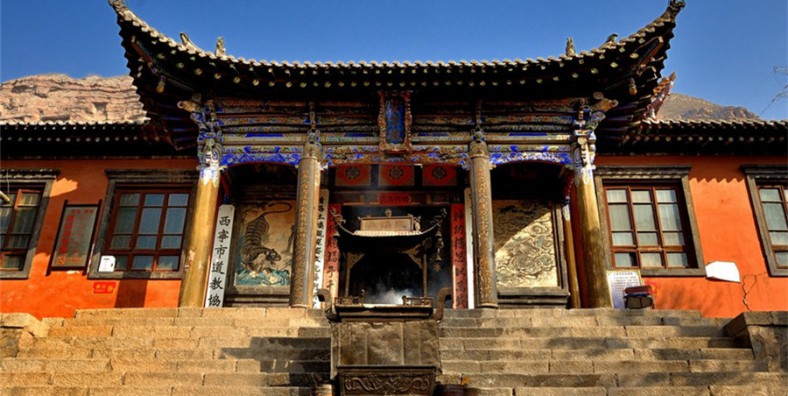 Why is Northern Buddhist Temple So Special?

Northern Buddhist Temple covers an area of 28,000 square meters (about 6.9 acres) and it leans against Northern Mountain (also called Tulou Mountain) in a northern suburb of Xining City, hence the name. Featuring Buddhist architecture and Taoist architecture styles it is renowned by its name ‘A Bright Pearl on the Southern Path of the Silk Road.

Where is Northern Buddhist Temple

Located on the Beishan Mountain, more than 2400 meters away from the coast of the Beihuang River in Xining City, it is commonly known as “Beishan Temple”

Since the founding of new China, the old appearance of tulou mountain has gradually improved, and it was once designated as Beishan park in the 1950s.

There are a total of 99 caverns with four layers including a single cave and cave groups inside Northern Buddhist Temple arraying from west to east. Residents call them the ‘nine grottos and eighteen cavities’. They are connected by a plank road, which is built along a cliff, a small bridge, and a wandering corridor. Inside the caverns we can see frescos and sculptures carved on the wall. It is recorded that when Buddhism prevailed at the time, people were made to paint Zaojing design (a kind of decoration in the coping of the cavern) and the artistic frescos of Buddhism. These lifelike pictures comprise the contents of historical legend, fable, Buddhist ceremony and the chief of Buddhism. Inside some of the cave groups there are precious Tibetan Buddhism frescos. The Northern Buddhist Temple is reputed as ‘Xiping (the former Xining) Mogao Caves’ and ranked as a National Key Protection Unit of Historical Relics.

In the middle of Beishan, there are two huge Buddha statues called “Lutian King Kong”. One has collapsed, but the other is still intact. The remaining one is more than 30 meters (about 98 feet), from a distance we can clearly see his head, body, legs and facial features. This Buddha statue was carved by many of his followers according to the original shape and form, to some extent reflecting the artistic style of the Tang Dynasty (618-907).

At the foot of Beishan is a temple called “Lingguan Temple”, which was destroyed by the war and rebuilt in 1915. There are mountain gates and wing rooms on both sides, and a horizontal plaque with the words “Lingguan Hall” is hung in the center of the hall. It is said that two apprentices of a famous Buddhist were buried at the foot of the mountain, which local residents call the “Buddhist tomb”.

Since the Qing Dynasty (1644-1911) when the Double Ninth Festival (Chongyang Festival) came, civilians went up the mountain to scatter paper deer (deer) and horses (horses) printed with the word “China” to worship Buddha to pray for safety and good luck. Especially in recent years, on the evening of the Double Ninth Festival, many people gather in the North Buddhist Temple decorated with lanterns and ribbons.

Previously, the North Buddhist Temple was only a Buddhist temple, but later when Taoism became popular, it evolved into a Taoist temple. Every year, groups of overseas Chinese gather here to take part in grand pilgrimage and visit.