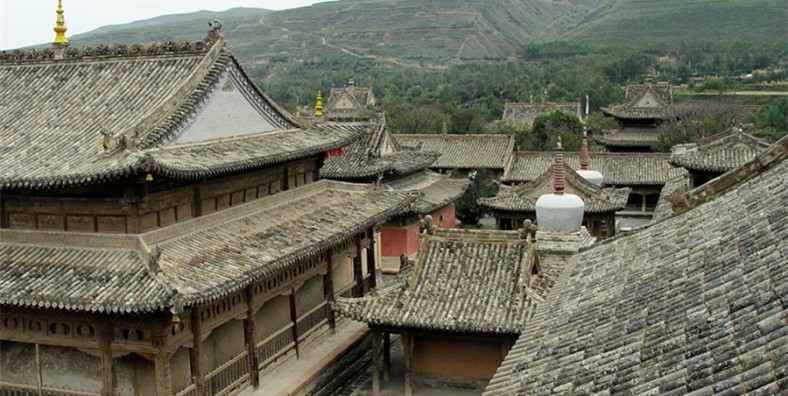 Qutan Monastery is located at Mabugoukou, 21 km south of Ledu County, Haidong City, Qinghai Province. It faces the Qutan River(瞿昙河), backed by Luohan Mountain(罗汉山), north to Songhuading(松花顶), and south to the Zhaobei mountain(照碑山). It is a Tibetan Buddhist Gelugpa monastery(格鲁派寺院) and famous for its precious cultural relics and huge colored murals. The temple is a typical official building complex in the early Ming Dynasty.

The monastery was firstly built in 1392 with a construction area of 27,000 hektare, carrying a history of more than 600 years till now. It keeps the most intact Ming-style building groups in northwestern China.Now, in the Qutan Monastery, there is a 600-year-old stele passing down from Ming Dynasty which records the unusual relationship the monastery had with the Ming Dynasty.

The temple is located in a slightly square castle called Tucheng, called “New Town”. The temple accounts for two-thirds of the area of the new city and is divided into three courtyards: the front, the middle and the rear.

The temple sits northwest to the southeast, and the main buildings on the central axis are:

The front courtyard comprising the Main Gate, a side gate and the surrounding walls are planted with pine and cypress trees and covered wide verdant lawns, with two tablet-containing pavilions facing each other across the axis and a circular door on each of the four tall and thick walls—the whole layout is reminiscent of typical Chinese garden.

On each side of the Nation Thriving Hall are large and small bell towers with a huge drum and bell. The bell is a precious relic dating back to 1427, or the second year of the Xuande Reign of the Ming Period. With two side gates, the winding covered corridors on the south and north connect the Bell Towers—the Hall of Buddha’s Warrior Attendants and the Nation Thriving Hall into an integrated closed architectural unit.

The temple preserves a large number of precious cultural relics of the Ming and Han dynasties. There are also a large collection of Buddhist works in the temple. The most striking thing about the existing relics in the temple is “Xiangbeiyungu(象背云鼓).” It was a stone statue, the elephant carrying a stack of wood carvings on the back, and the stack of clouds set up a real drum. The stone statue is about 1 meter high and 5.3 meters per week. Stone elephant looks back, nose roll lotus.

How to get to Qutan Monastery

From Xining Bus Station (opposite the railway station) to the long-distance bus of Ledu, the distance is about 80 kilometers, the fare is about 10 yuan, and each bus is 20 minutes apart. Ledu has a shuttle bus to the Qutan Monastery, 30 minutes by car, one way 5 yuan.

2 thoughts on “Qutan Monastery in Haidong”