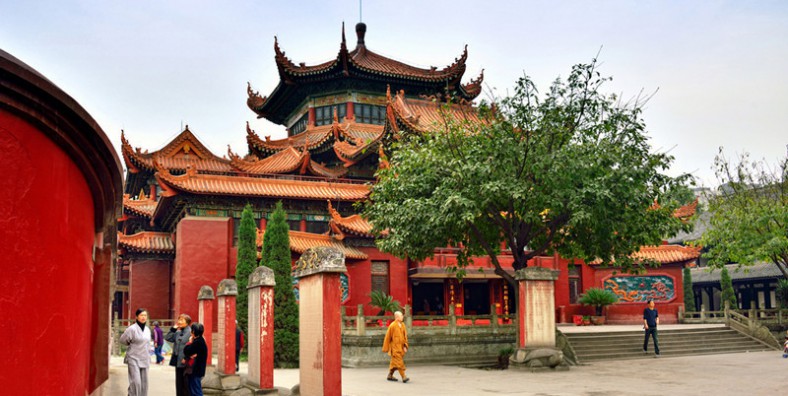 The Zhaojue Temple is situated in Qinglongchang in the north suburb of Chengdu, Sichuan Province, close to Chengdu Zoo. It is one of the key Buddhist temples in China and an important place for Buddhist activities, and has been known as the “No. 1 Zen Buddhist Temple in Western Sichuan”.

Why is Zhaojue Temple So Special?

Zhaojue Temple is located in the north of Chengdu, linked with Chengdu Zoo, 5 kilometers from downtown area. It is reputed as the First Buddhist Temple in West China. It was first named “Jianyuan Temple” and later given “Zhao Jue” in Tang Dynasty.

During Song Dynasty (960—1279), Zhaojue Temple was rebuilt with the support of Royal family. The famous abbot during Song Dynasty was Yuanwu Buddhist, who became the abbot of Zhaojue Temple twice. What’s more, the work of Zen tea blindly of Yuanwu Buddhist was introduced into some Asian counties, such as Japan and so on, which had a significant impact on these counties, especially Japan. As a result, the position of Zhaojue Temple was very important in the Buddhist history of China and it made great contributions to the culture exchange between China and other Asian counties.

During Ming Dynasty (1368—1644), Zhaojue Temple was expanded with the support of the Emperor Zhu Yuanzhang. Unfortunately, it was destroyed in the war in 1644. And then, Ming Dynasty collapsed.

During the early Qing Dynasty (1636—1912), Zhaojue Temple underwent extensive reconstruction with the supervision of the abbot. Because of the reconstruction, most buildings could be reappearance, such as the front gate, Octagonal Pavilion, the Hall of Heavenly Kings, the Hall of Ksitigarbha Bodhisattva, the Mahavira Hall, and a depository for sacred Buddhist sutras. And Zhaojue Temple was surrounded by waterways and trees.

Structural Layout of the Zhaojue Temple

The structural layout of Zhaojue Temple is very clear. The axis consists of the gate, the Octagonal Pavilion, the Hall of Heavenly Kings, the Mahavira Hall, and the Depository of Buddhist Sutra. On the two sides of the axis are the Guanyin Pavilion, the Bell Tower, the Drum Tower, and the Tower of Zen Master Yuanwu.

On the gate hangs a plaque which reads ‘The First Buddhist Temple’. Walking along the broad avenue, people can see the Octagonal Pavilion. Behind it stands the Hall of Heavenly Kings (天王殿), in which the Maitreya Buddha (弥勒佛 Buddha of the Future), and the four great Heavenly Kings are consecrated. Besides, the stone bridge in front of the hall is a precious historical relic.

Behind the Hall of Heavenly Kings is the Mahavira Hall (大雄宝殿). Entering the hall, tourists can see three white marble Buddhas. The Buddha in the middle symbolizes absolute truth. The one on the left represents wisdom, while the one on the right signifies benevolence. On the both sides of the Buddhas are the statues of the eighteen arhats showing different facial expressions.

How to get to The Zhaojue Temple

If you want to get out of the traffic and hassle of navigation, you can book a private tour package that includes visiting, dining and transfer from us. Our local guide and driver will escort you to Zhaojue Temple in Chengdu in the fastest and most convenient way and take care of all the details. You just have to focus on the visiting.