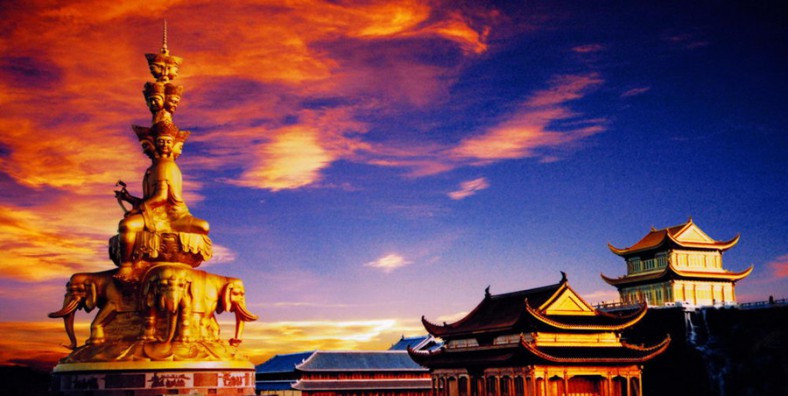 As one of the few World Heritage Sites for both cultural and natural heritages, Mount Emei is an enchanted combination of lush forest and monasteries. It’s the one of the Four Great Buddhist Mountains in China.

Address: Mount Emei is located in the southwestern part of the basin of Sichuan province, it is 7 kilometers away from Emeishan city, and the city of Emeishan is 156 kilometers from Chengdu, 34 kilometers from Leshan city.

Why is Sichuan Mount Emei So Special?

Mount Emei Scenic Area, located in the southwestern part of the basin of Sichuan province, it is 7 kilometers away from Emeishan city, and the city of Emeishan is 156 kilometers from Chengdu, 34 kilometers from Leshan city. It is a national scenic area and listed in the World Cultural and Natural Heritage Sites together with Leshan Giant Buddha.

Emeishan is abundant in natural scenery and resource, which is called as the “Kingdom of Plants”, “Paradise of Animals” and “Museum of Geological Reserves”. However, Emeishan is not only famous for its steep terrain and beautiful natural scenery, but also famous for its profound Buddhist culture. As one of the four most sacred Buddhist Mountains in China, there are more than 30 Buddhist temples in the Mount Emei, such as Baoguo Temple, Fuhu Temple and Xixiang Temple.

Main Attractions of the Mount Emei

It is the No.1 Buddhist temple Mount Emei Scenic Area. Among the countless temples in Emei Mount, Baoguo Temple is the entrance of it. It is the start of Mount Emei as an important passageway that you must pass when climbing up to the Emei Mountain. With many historical relics in the temple, while visiting the Bao Guo Temple, you can appreciate these historical relics at the same time such as famous colorful glaze porcelain Buddha. The quiet environment and the dense religious atmosphere make it as a charming site for tourists to get touch with the Chinese Buddhism.

Meaning thousands of years temple in Chinese, it is located in the Mount Emei. This temple is one of the major temples in Mount Emei. It is said that there is a kind of special small frog on the Emei Mountain in the rectangle pond at the right side inside the Wannian Temple. In quiet evening, they will release pleasant sound all the year. All who have heard the sound describe this kind of frog as “Playing Instrument Frog”.

Qingyin Pavilion looms in Niuxin Mountain, with Heilong River in its left and Bailong River in its right. At confluence canyon there is one black stones, shaped like a cattle heart, therefore the stone is called the Niuxin Stone (cattle heart stone). Under the pavilion there are two Flybridges, and Shuangfei Pavilion stand between the two bridge, two clear streams rush through the bridge.

It is the highlight of Mount Emei, an important attraction integrating the temples and scenic sites together. In 1983, it was classified as one of the national Han Chinese Buddhist temples. As a wondrous sight-seeing platform and the biggest pilgrimage centre of Chinese Buddhists, it has been crowned as a scenic masterpiece in the Chinese World.

It was constructed during the Eastern Han Dynasty and has been rebuilt several times after being struck by lightning. Golden Summit is in a height of 3,078 meters above the sea level. When standing here, tourists will find that clouds are lower than the peak which ensures to savor the exotic exciting scenes such as magnificent sunrise, clouds sea, mysterious Buddha rays, as well as the holy Saint Lamps.

Top 10 Sceneries of the Mount Emei

The ten old sceneries of Mount Emei include the Lucky Light at the Golden Summit, the Moonlit Night in Elephant Pool, the Godly House of Nine Sages, the Morning Rain at Hongchun, the Snow on the Daping Peak, the Autumnal Sound at the Double Bridge, the Autumn Wind over the Baishui Pool, the Clouds of Sea on the Luo Peak, the Smoke Cloud in the Thunder Cave, the Jade Bamboo Shoot and the Evening Bell of Shengji.

The ten new sceneries of the mountain include the Golden Buddha on Golden Summit, Ten Thousand Buddhas, the Dengxiaoping’s Praise of the Mountain, the Monkeys in Tranquil Valley, Soft Music from Peaceful Lake, the First Pavilion on the Cliff, the Inscriptions on Precipices, the Most Beautiful Waterfall in the world, the Meeting Square and the Staring Point of Great Mountains.

The best time to visit Emeishan is in Spring and Autumn. In Spring, the mountian is carpeted with azalea blossoms. As you  enjoy the beautiful flowers, you can also join the Buddhist Temple Worship Festival which are held from March to April. In addition, you can taste the the fresh green tea in spring. In Autumn, the red leaves  represent the autumn scenic view. The autum in Emeishan Mountain is short, only from the middle of September to the end of October. The tree leaves turn yellow first and then turn red. You can stand on the top of the mountain to overlook the valley, the view is spectacular.

How to get to The Mount Emei

If you want to get out of the traffic and hassle of navigation, you can book a private tour package that includes visiting, dining and transfer from us. Our local guide and driver will escort you to Mount Emei in Sichuan in the fastest and most convenient way and take care of all the details. You just have to focus on the visiting.