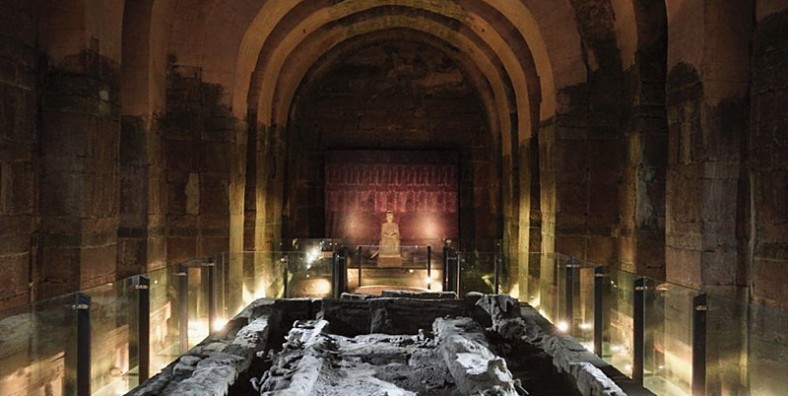 Yongling Museum has China’s only above-ground mausoleum, the tomb of Wang Jian (847-918). Wang Jian was the founder the “Former Shu” State, a separatist regime with Chengdu as its capital, during the “Five Dynasties and Ten Kingdoms” period (907─967). The statue of him is said to be the only remaining lifelike figurine of any emperors in China.

Why is Yongling Museum So Special?

Yong Ling (also known as The Royal Tomb of Wang Jian), is the mausoleum of Wang Jian. Wang Jian founded the Kingdom of Former Shu (907-925) during the period of Five Dynasties, held his court in Chengdu. Yong Ling was built in 918 after Wang Jian died, excavated in 1942, and announced in 1961 as national major cultural relic protection department. And Yong Ling Museum was first open to public in 1979.

Yongling Museum, located on Yongling Road in downtown Chengdu, Sichuan province, is the only royal tomb, which has been built on the ground, not like the other “underground palaces”.  There are 24 musicians and dancers carved around the coffin platform, include 23 pieces for 20 kinds of Instruments, showing the graceful court music and dance in the period of Tang Dynasty and Five Dynasties.  The Twelve Warriors stand at the west- and eastside of the coffin platform, about to lift it up. This design is so special that nowhere else has the same example. And through the lifelike stone statue of Wang Jian, we could know the appearance of this Emperor before over 1000 years.

He established the Former Shu Kingdom in 907 here. The founding of the former Shu kingdom greatly enchanced the development of the society, speeded up economic and cultural development as well. He died in 918. His son, Wangyan succeeded him. He lost his power in 925 to Houtang Dynasty largely due to his negligence and indulgence.

What to See in the Yongling Museum

Yongling Mausoleum has a circular base that measures 80 meters (262 feet) in diameter. The structure itself stands 15 meters (49 feet) tall with 14 archways made of gray bricks. Despite its ordinary look, the mausoleum is quite well known in archeology circles. Unlike other imperial tombs, the preponderance of this tomb rises over the ground. Somehow the mausoleum has long been mistakenly regarded as the Zither Playing Terrace, where Sima Xiangru, a gifted scholar in the Western Han Dynasty (202 BC – 9 AD), played zither to his lover Zhuo Wenjun. In 1942, the mausoleum was excavated by archeologists.

The tomb was composed of three chambers – front, middle and rear with a length of 23.4 meters and width of 6.1-6.4 meters. The three chambers were connected by three wooden doors.  His coffin was laid on the middle chamber and his life size statue was set in the rear chamber.

Around his coffic chamber, 24 music players holding different folk music instruments are vivid in expressions, which presents the grand palace music in later Tang Dynasty and the Five Dynasties and Ten States.

Yongling Exhibition Hall is a three-floor modern building located at the north end of Yongling Mausoleum. The ground floor functions as a regular exhibition hall showcasing the culture of the Former and the Later Shu. It shows the rise and fall of these two regimes and an array of cultural relics discovered in Yongling Mausoleum. Valuable relics such as a jade belt, an imperial jade seal, and a silver bowl are displayed. Temporary exhibitions are held on the other two floors.

Yongling Museum is situated in Yongling Park, which boasts a tranquil atmosphere, enchanting landscapes, meandering paths and exquisite pavilions. So even if you are not interested in Chinese culture or archaeology, Yongling Museum is an ideal place for taking a walk.

How to get to The Yongling Museum

If you want to get out of the traffic and hassle of navigation, you can book a private tour package that includes visiting, dining and transfer from us. Our local guide and driver will escort you to Yongling Museum in Chengdu in the fastest and most convenient way and take care of all the details. You just have to focus on the visiting.