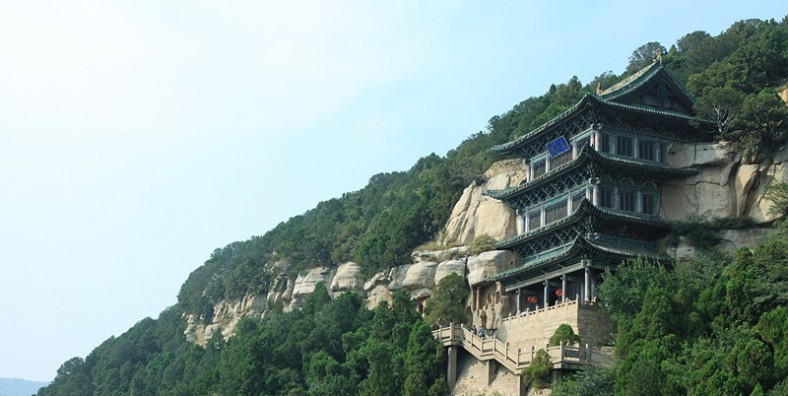 Tianlongshan Grottoes is a series of 24 caves carved into the mountainside of Tianlong Mountain and well known among Chinese art experts for the fine Buddhist statues and decorations which were sculpted within. The 24 caves were carved in Eastern Wei, Northern Qi, Sui, and Tang Dynasties. Grottoes 2 and 3 are the oldest in the complex, with a history of nearly 1,500 years. The largest and most impressive grotto is the ninth one, a multi-storied cave with several large Buddha statues and covered by an intricate three-story wooden pavilion, the Manshan Pavilion.

About 25 miles (40 km) southwest of Taiyuan, the Tianlong Shan Grottoes in the Tianlong Mountains constitute a small, but significant, collection of Buddhist cave art. A total of 21 caves dot the eastern and western sides of the mountain, with worn and damaged statues dating from the eastern Wei to the Tang dynasties. The best preserved specimen is the large seated Buddha in cave number 9.

Tianlong Mountain is also called Square Mountain, the altitude is 1,700 meters. The scenery here is beautiful. It used to be the summer palace of the father of Gaoyang Emperor of the Northern Qi Dynasty (420 – 589). Arising mountains stand around Tianlong Mountain; verdant trees grow on Tianlong Mountain. The fountain of the Longwang Grotto runs quietly. In front of the mountain, the water of the bourn flows slowly. Tianlongshan Grotto was first built in the Eastern Wei Dynasty (534—550), Gaohuan constructed grottos in Tianlong Mountain. Gaoyang, the son of Gaohuan, established Jinyang as another capital of the Northern Qi Dynasty (420 – 589). Continually, they built grottos in Tianlong Mountain. In the Sui Dynasty (580-618),Yangguang was Jin emperor, he continued to build grottos. Liyuan and his father started their great exploit in Jinyang. The construction of these grottos reached its peak.

The Maitreya Buddha, of the ninth grotto “Manshan Pavilion” is eight meters in height, the ratio of the figure is harmonious, and the countenance of the Buddha is dignified and elegant. The figure of Kwan-yin below is eleven meters high. With glorious jade-like stones and transparent voile, her figure is plump and charming. While the figure of Puxian is smiling and mellow, it is the outstanding works of the stone carvings.

Taiyuan, the capital city of Shanxi Province, is an ancient city with a history of over 2,500 years, earning its fame for the long history and rich mineral resources. As one of the famous historical cities in China, Taiyuan is the known for many historical sites, such as the Chongshan Monastery which was built in the Tang Dynasty (618 – 917), Chunyang Palace, in which the layout of the buildings resembles the shape of the Eight Diagrams, and the Twin Pagoda Temple which is the symbol of Taiyuan. Taiyuan is also a city, rich of mineral resources such as coal, iron, copper and limestone, especially for coal mines, making the city known as ‘the sea of coal’.

How to get to Tianlongshan Grottoes

If you want to get out of the traffic and hassle of navigation, you can book a private tour package that includes visiting, dining and transfer from us. Our local guide and driver will escort you to the Tianlongshan Grottoes in Taiyuan in the fastest and most convenient way and take care of all the details. You just have to focus on the visiting.

Take the bus that goes from Taiyuan to Qingxu, or take NO. 8 bus and take off at the Jinci Temple Station. Then, bypass Jinci Temple to Tianlong Mountain, walk straight along the road that around the mountain until you see Tianlongshan Grotto. Now you have to pay for going into the mountain.