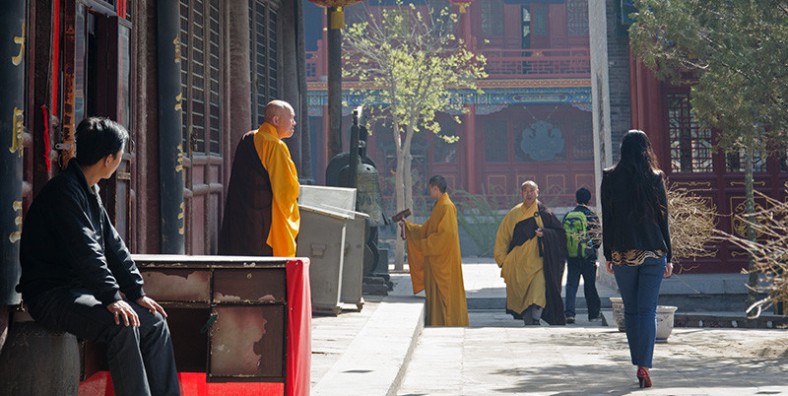 Originally built in the Tang Dynasty, it was known as the White House Temple at the beginning. And in Ming Dynasty, this temple was renamed as Chongshan Temple which means great mercy temple.

Why is Chongshan Temple So Special?

Chongshan temple is a Buddhist temple, which has now become a key cultural relic protection unit in Shanxi province and is also the seat of Shanxi Buddhist association. Precious Buddhist scriptures and Taoist classics are not only models of Chinese woodcut printing history, but also models of ancient Chinese calligraphy and carving art attracting accomplished monks, scholars and tourists.

Chong shan temple is a royal buddhistotemple, located in the southeast corner of Taiyuan city, Shanxi province, is now the seat of the Shanxi Buddhist association.

Chongshan Temple was originally built in the Tang Dynasty (618-907) and was once called Baima Temple. It is located in Huangmiao Lane, Wuyi Road, Taiyuan City, Shanxi Province. In 1383, in memory of the mother of Zhu Gang, Zhu Yuanzhang’s third son (1328-1398), the first emperor of the Ming Dynasty (1368-1644) rebuilt and expanded the temple and renamed it Chongshan Temple.

The building was completed in 1391. The layout of this magnificent palatial temple can be clearly seen from the existing architectural planning of Chongshan Temple. Chongshan Temple covers 245 mu (40.4 acres) and is very spectacular.

However, during the reign of the Emperor Tongzhi of the Qing Dynasty (1856-1875), the temple was almost reduced to ashes. Only one in 40 survived today, including the bell tower, the great north hall and the east and west wing rooms. The local government has restored the former glory of the monastery.

Chongshan Temple is a large Buddhist temple. Judging from the long-preserved complete map of Chongshan ancient temple, the temple covers an area of about 14,000 square meters and has six halls, 18 courtyards and hundreds of rooms. In 1864, a fire broke out in Chongshan Temple and the main buildings were burned to ruins. So far, only one hall can be preserved as Shanxi Museum.

A striking scroll of Hua Yan Jing is located on the right side of the main hall. This is written by Jing Jie, a monk of Ming Dynasty, using his own blood as ink. This pious undertaking was completed in at least 12 years. On the left side of the hall are the Tibetan Jing Book Collection and the Chinese Book of the Great Tibetan Scripture, which were introduced from Japan in 1973 and the Great Tibetan Scripture in 1983.

On both sides of the courtyard in front of the main hall stood a drum tower and a bell tower, which were also buildings of the early Ming dynasty.

There are three splendid treasures in these surviving buildings.

The best time to visit Chongshan Temple is between Mays to Octobers.