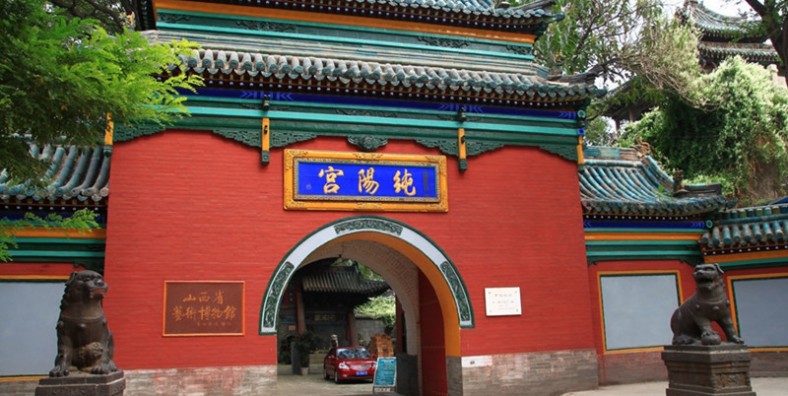 Chunyang Palace is located on the west side of Wuyi Square in the downtown of Taiyuan. When you walk through the gate of the Chunyang Palace, you will be able to catch sight of an elegant wooden archway standing right in front of you. To the west of the archway, you will be able to spot the four statues of the Ming dynasty. The major attraction is the comparison of the "Dragon King Statue" in the middle, which is very admirable.

Constructed during the reign of the Wanli (1573-1620) of the Ming Dynasty, Chunyang Palace was expanded during the Qianlong regin (1736-1795) of the Qing Dynasty. Through small in size, Chunyang Palace is highly spoken because of its well designed layout. The palace is till one of the best places for sightseeing in Taiyuan. It was initially built in the later Song Dynasty (960-1279) for giving sacrifices to the Taoism supernatural being Lu Dongbin, so it also has a name of Luzu Temple. Chunyang Palace is a five graded courtyard, integrates the style of temple and garden. There are various pavilions and kiosks.

so called Lu Temple, Ming and Qing dynasties, when modified to expand the scale that formed. Chunyang Palace is a set of temple, garden-style as one of the five Jinyuan La, courtyard gardens have everything in there. Four-on the third floor in front of a wooden arch, its shape, color are all unique and striking. Lu Zu Hall of Chunyang Palace, the main hall, located in the central courtyard, Miankuo 3, just like they are the most spectacular palace buildings. Architectural pattern of the bare rear courtyard is quite unique orientation is said to be built according to gossip, with a distinctive architectural features of Taoism, but also the entire Chunyang Palace of Taiyuan tours in its essence.

In front of the door, four three-floor wooden mills are very attractive for their unique styles and special colors. Luzu Temple is the main hall of Chunyang Palace, and it lies in the central of the courtyard. Three rooms of Luzu Temple are broad and square. So Luzu Temple is the most magnificent architecture in the palace. The style of the courtyard behind the hall is unique, it is said that it is built according to the directions of the Eight Diagrams, having obvious Taoism architecture characteristics. It is also the essence of the whole Chunyang Palace.

Shanxi Museum designed as a museum, where there are more than 20 showrooms, respectively, the essence of cultural relics exhibited in Shanxi elements, such as ceramics, bronzes, lacquer, enamel, stone sculptures, jade bamboo ivory carving, calligraphy, painting, monument paste and embroidery and so on for Taiyuan tours.

Luzu Temple (鲁祖庙) is the main hall of Chunyang Palace, and it lies in the central of the courtyard. Three rooms of Luzu Temple are broad and square. So Luzu Temple is the most magnificent architecture in the palace. The style of the courtyard behind the hall is unique, it is said that it is built according to the directions of the Eight Diagrams, having obvious Taoism architecture characteristics. It is also the essence of the whole Chunyang Palace.

Taiyuan, the capital city of Shanxi Province, is an ancient city with a history of over 2,500 years, earning its fame for the long history and rich mineral resources. As one of the famous historical cities in China, Taiyuan is the known for many historical sites, such as the Chongshan Monastery which was built in the Tang Dynasty (618 – 917), Chunyang Palace, in which the layout of the buildings resembles the shape of the Eight Diagrams, and the Twin Pagoda Temple which is the symbol of Taiyuan. Taiyuan is also a city, rich of mineral resources such as coal, iron, copper and limestone, especially for coal mines, making the city known as ‘the sea of coal’.

How to get to Chunyang Palace

If you want to get out of the traffic and hassle of navigation, you can book a private tour package that includes visiting, dining and transfer from us. Our local guide and driver will escort you to the Chunyang Palace in Taiyuan in the fastest and most convenient way and take care of all the details. You just have to focus on the visiting.

Take NO. 3, 4, 5 bus to get to Wuyi Square, then several minutes’s walk will take you there.

Try to avoid visiting Chunyang Palace during Golden Week and summer holidays where the crowds and number of visitors will be substantially higher than usual.