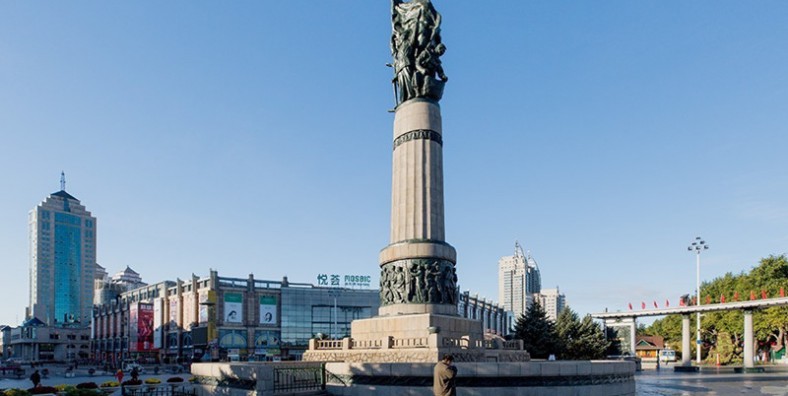 Stalin Park is one of the places for sightseeing and be away for the summer holidays on the river bank of Songhua River. It gazes at each other with the Sun Island from beyond the river. The park was built in 1953, old named Riverside Park. Park has a length of 1750 meters and is a opening park along the river. It covers an area of 105 thousand square meters.

Why is Stalin Park in Harbin So Special?

Stalin Park is one of the most famous scenic spots in Harbin City. Built in 1953, it now stands as an evidence of the friendship between China and Soviet Union at that time. It is characterized by Russian style flower beds and sixteen groups of art sculptures and is abundantly vegetated with trees and colorful flowers, making Stalin Park a famous summer resort at home and abroad. The place is very popular with local people on weekends.

Stalin Park is located on the south bank of the Songhua River. Extending 1,750 meters from the Songhua River railway bridge to the east and Jiuzhan Park to the west, which is a belt-shaped open park built along the riverbank. Facing the famous Sun Island on the other side of the river and ocupying an area of 105,000 square meters, the park is featureed by Russian style flower beds and sixteen groups of art sculptures and is lavishly vegetated with flowers and trees. This place is very popular on the weekends.

What to Do in The Stalin Park

The Jile Temple strictly follows the traditional Chinese temple style. It is a magnificent and resplendent architectural complex. Every house was built of blue bricks and glazed colored tiles. Facing south, it can be divided into three courtyards on the left, middle and right. The Mountain Gate was built to resemble the Chinese character “山” (mountain in English), thus the name “Mountain Gate”. The front hall is the Heavenly King Hall, followed by the Hall of Mahavira, the Hall of Three Saints and Scriptures-storing Tower according to priority.

Entrance of Jile TempleThere are similarities and differences in the shape, structure, ornament and arrangement among the buildings in Jile Temple. For example, the Hall of Mahavira and the Back Hall do not have wood brackets and large open windows, instead, the separate small windows clearly reflects the typical feature of housing in the cold climate of northeastern China.

The Railway River Club was built in 1912, covering an area of over 5,000 square meters, old named Yacht Club. After the founding of New China, Northeast Railway Federation of Trade Unions spent 0.8 billion northeast money to revert the railway from the Soviet Consulate and renamed it Harbin Railway River Club.

The feature of the style of the building is deeply attracted worldwide attention, especially with the hull of the main building half-lying on the embankment and half-stretch out of the river. It looks like a colossal ship ready to start. This is a collection of multi-function service in a in a whole part leisure club.

The River Bank Restaurant located in the park was constructed before liberation (Manchukuo Period). It lies on the west side of Harbin Flood Control Memorial Tower, near the Yacht Marina. It makes traditional Russian wood structure building as a model to be built. The park is so attractive that some movies and TV plays were finding a view in the Stalin Park.

How to Get to Stalin Park From Harbin City

If you want to get rid of hustle of transportation and troublesome navigation, you can book a private tour package which covers visiting, dining and transfer from us. Our local tour guide and driver will escort you to Jile Temple in Harbin with speed and convenience, and take care of all the details. You just need to focus on travel.