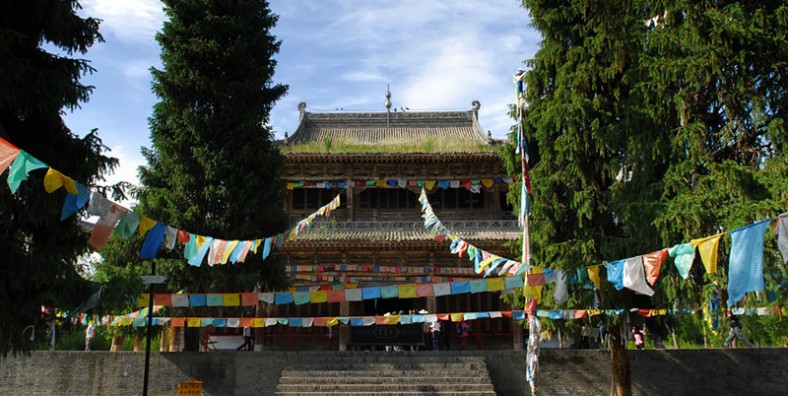 This is a Qing dynasty building built in 1898 and is still a place for Mongolian herdsmen in zhaosu county and Ili valley to pray for god.

It was built in the 19th year of the Guangxu period of Qing Dynasty (1893), covering an area of 2000 square meters. It is a relative complete extant temple in Xinjiang, having a gate-facing screen wall, a temple gate, a front hall, a main hall, a back hall, side halls, and an octagonal double layered attic with a double-eave. The main building is the Daxiong Hall. which is 17 meters wide, with the flying-eaves on the four comers stretching out. Inside the covered passage are painted wall-paintings of rare birds and animals and scenes of fairy tales in traditional Chinese style. This lamasery is listed as a major cultural site protected by autonomous region.

The ancient trees in the temple of sainthood in zhaosu, Yili, Xinjiang are towering. pine trees block out the sun and enter the house, giving people a feeling of being free from vulgarity. Looking along the central axis, the eight buildings are strewn at random with symmetrical layout. In addition to the zhaobi, the gate, the front hall, the main hall and the rear hall, which are built along the central axis, there are still hard top side halls and octagonal double-decked eaves pavilions on the left and right. Zhaosu Shengyou Temple in Yili is a resplendent and magnificent Lama temple. Many Xinjiang tourists will visit Zhaosu Shengyou Temple in Yili, Xinjiang, after visiting Tekes Bagua City and Zhaosu Grassland.

The temple of sainthood in zhaosu, Yili, is built by the traditional building method of Chinese temples. it is made of brick and wood. the buildings are symmetrically arranged on the central axis and the halls are connected.

When you enter the temple of zhaosu, Yili, the first thing you see is the temple of French dance. It is covered with green tiles, cornices at four corners, complicated wood carvings in the middle, and plain blue bricks and white walls at the bottom. According to the guide of Xinjiang travel agency, this temple is a place for monks to dance during the grand ceremony. When dancing the dharma dance, one should wear a mask with Buddhist symbolic meaning and convey the Buddha’s meaning by dancing to the rhythm of the multiplier.

Inside the hall, butter lamps are long and bright. Outside the hall, pilgrims are coming from afar to pray for blessings. The ancient trees in the temple of the Sacred Blessing Temple in Zhaosu, Yili are full of shade, the morning bell and the evening drum, the monks gather together, the birds sing and the birds dance. It looks simple and solemn.