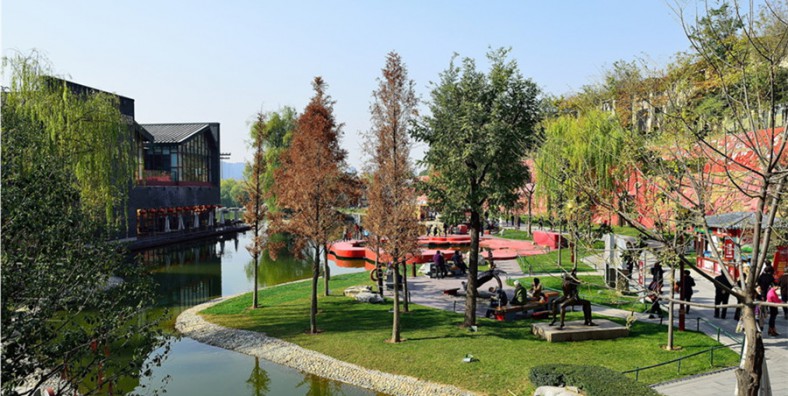 Qujiang Cool Cave Heritage Park  is the first large-scale theme park focusing on nuptial amenity and customs. It is located in the southeast of the Qujiang district in Xi'an city, with the Qujiang Ruins Park, the Great Wild Goose Pagoda, the Lotus Palace of Tang Dynasty and the Sleepless Town of Tang dynasty surrounding. The Cool Cave Heritage Park is also one of the six site park projects in the New Qujiang District. It will cover 188.75 acres after completing, including park of 60 acres and other functional areas of 120 acres.

Tickets: CNY:60 per person
CNY 30 for the old between 65 and 69 with certificate

Why is Qujiang Cool Cave Heritage Park So Special？

Qujiang Cool Cave Heritage Park is the first large-scale theme park focusing on nuptial amenity and customs. It is located in the southeast of the Qujiang district in Xi’an city, with the Qujiang Ruins Park, the Great Wild Goose Pagoda, the Lotus Palace of Tang Dynasty and the Sleepless Town of Tang dynasty surrounding. The Cool Cave Heritage Park is also one of the six site park projects in the New Qujiang District. The love stories in the history and nuptial customs are the main themes in the Cool Cave Heritage Park, which is the first love-theme park in China. It is an excellent place for love-promise, love-memorize and love-education.

Covering a total area of 71 mu (about 12 acres), the Cool Cave Heritage Park consists of three sections, the Cool Cave Site Section, the Wedding Celebration Section as well as the Commercial Section. The Cool Cave Site is the core of the park and the major part for most visitors. The Cool Cave Story Exhibition Hall is designed to, while focusing on the love-story, present the scene of the romance between Wang Baochuan and Xue Pinggui, including the first encounter, acquaintance, throwing the embroidered ball away from the Caipei Building, and the visit to the humble farmer’s cave via modern visual arts and phantom imaging technology.

It is said among people that in later Tang Dynasty (618 AD–907 AD), a smart and pretty girl, Wang Baochuan, whose father was the then prime minister, insisted on marrying a beggar, Xue Pinggui, rather than the offspring of the noble regardless of the common customs of social hierarchy and thus broke away from her family. Shortly after their marriage, Xue Pinggui went to the army, while Wang Baochuan lived in a cool cave in Chang’an, waiting for her husband’s return for 18 years through all kinds of hardship. The Cool Cave Site came into being in later Qing Dynasty (1644 AD–1911 AD) and underwent renovations in 1934. In June of 1984, the local government funded the site for another restoration and opened it to public in 1985. The Cool Cave Heritage Park, opened on May 1, 2010, is a love-themed park integrating the Cool Cave Site, leisure and entertainment as well as wedding celebration industry.

Including the Wang Baochuan Cave, Third Sister’s Spring, Chastity Hall, Mysterious Horse Cave etc., Cool Cave Site Section is to see the cave dwelling, which is seldom to see in Xian. With 12 caves, here displays the household articles and instruments of labor used by Wang Baochuan, embodying her daily life throughout 18 years of persistent stay here.

Third Sister’s Spring, which she used to fetch water from during the 18 years, is named for she is the 3rd child of her family. Even several thousands of years passed, the spring water remains exuberant and pure. Chastity Hall is named to commemorate Wang Baochuan’s unswerving loyalty to love, by exhibiting a collection of old photos and books contributed by the folk. Mysterious Horse Cave is said to be the place where the horse with brown mane stayed. Legend says the mysterious horse runs out the cave and hurts people, but finally it is tamed by Xue Pinggui.

Jinyuange Pavilion, the name of which implies good luck in marriage, is the main building in Wedding Celebration Section. With 2 large banquet halls, 11 deluxe compartments and a wedding terrace over water, this pavilion is capable of providing cuisine, scenery, and tableware to 1,000 guests simultaneously. The Commercial Section, Cool Cave New Street, takes on a typical courtyard structure of central Shaanxi plain. Centered on the Opera Stage, the New Street consists of the north section and the south section. The Opera Stage is designed for the performance of Qin opera. The south section focuses on wedding business, such as wedding photography, wedding planning as well as wedding articles while the north section is designed for diversified catering.

How to get to Qujiang Cool Cave Heritage Park

If you want to get out of the traffic and hassle of navigation, you can book a private tour package that includes visiting, dining and transfer from us. Our local guide and driver will escort you to the Qujiang Cool Cave Heritage Park in Xi’an in the fastest and most convenient way and take care of all the details. You just have to focus on the visiting.