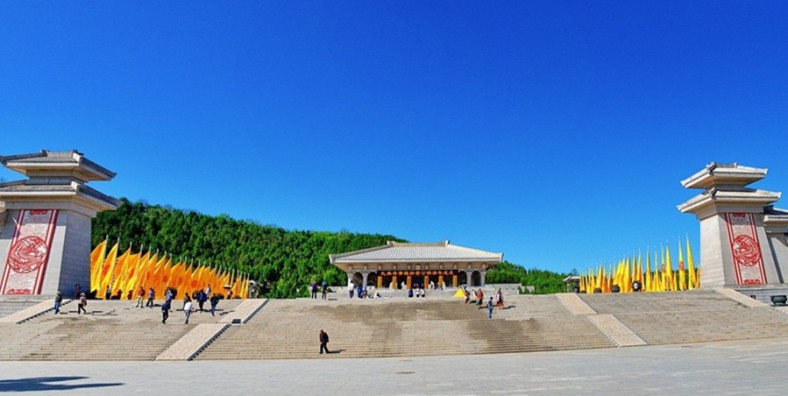 Huangdi Mausoleum, memorial mausoleum of legendary Huangdi, is the most important ancient grave site in China. After many years' development and construction, it became not only a mausoleum, but a key point of interest for historical Chinese culture. The main sights in this scenic spot are Huangdi Mausoleum and Xuanyuan Temple. Before visiting this location, one should know about Huangdi in detail.

Recommended Visiting Time: about  half a day

Why is Huangdi Mausoleum So Special？

The Mausoleum of Yellow Emperor used to be called “Bridge Mausoleum” in ancient China due to its location on the Qiao Mountain or Bridge Mountain. According to historic data, Chinese had worshiped Yellow Emperor early in 442 BC and the mausoleum had become the site for national sacrifices since 770 AD (Tang Dynasty). In 1942, Chiang Kai-shek, former Chairman of Central Committee of the Kuomintang, visited the mausoleum, inscribed “黄帝陵” (Huangdi Ling) and made it the name of the mausoleum. Since then the stele with the new name stood there and the county the mausoleum locates was named after “黄陵 (Huangling)” instead of the original “中部 (Zhongbu)”.

Nowadays the Mausoleum of Yellow Emperor is embraced by more than 80,000 ancient cypresses on the Bridge Mountain. Surrounded by a black brick wall and a sacrifice pavilion, the grave mound remains 3.6 meters in height with a perimeter of 48 meters, in front of which stands an old stele set up in 1537.

Huangdi, the initiator of Chinese civilization, was a great tribal leader in the final primitive society of ancient times. His family name was Gongsun. Because he grew up at Xuanyuan hill (in Xinzheng County of Henan Province), he was called Xuanyuan. He worshipped the virtue of the yellow earth (the source of foods and clothes); hence people call him Huangdi.

It is said that he met a supernatural creature that talked and taught him about hundreds or thousands of kinds of supernatural creatures. He also led a war against fierce monsters of 9 barbarian tribes, and his army won because he was able to call on the god of draught called Nuba. In the end, a dragon came, and he rode it. It is said that as people tried to hold him to the earth as the dragon was taking him away, they pulled off his clothes but couldn’t catch him.

One the side of the stone way to the mausoleum there is a “dismount stone”, on which there is an order requiring imperial officials to dismount there to show their respect to Yellow Empeor. The “Immortal Platform of Emperor Handudi (汉武仙台 Hanwu Xiantai)” near the mausoleum is said to be built for Hanwudi to worship Emperor Yellow after he won in war against the Xiongnu ethnic minority. In the stele corridor at the eastern side of the mausoleum area 57 funeral orations are collected; in addition, inscriptions by many modern Chinese leaders such as Sun Yat-sen, Mao Zedong and Deng Xiaoping are displayed in the memorial pavilion. The Great Hall of Ancestor of Chinese is the main hall where the anaglyph of Yellow Emperor made of dark jade is enshrined and worshiped.

Xuanyuan Temple is also named Huangdi Temple, established in the Ming Dynasty (1368 — 1644). The main structures inside the temple are Temple Gate, Chengxin Kiosk, Stele Pavilion and ‘Renwen Chuzu’ (Huangdi, the initiator of Chinese civilization) Hall. Inside the grand ‘Renwen Chuzu’ Hall, Huangdi’s seat of spirit tablet (an exquisite piece of wood with his name on it) is worshipped. People can do obeisance or hold ceremonies in front of it. Among 14 cypresses in the courtyard, the must-see ones are two: the cypress planted by Huangdi and the Jiangjun (general) cypress. It is said that Huangdi planted the cypress thousands of years ago to encourage planting of trees and forestation. Now the huge green umbrella is 19 meters high (about 20.8 yards) and is the oldest cypress in the  world. There is another legend about the Jiangjun cypress that says Emperor Wu of Han Dynasty ever hung his visor on the pine, so people call it Jiangjun cypress. It is also a rare type of cypress. Situated in the west portion of Xuanyuan Temple is the Gongde (merits and virtues) Altar, the theme of which is the outstanding achievements of Huangdi.

How to get to Forest of Huangdi Mausoleum

If you want to get out of the traffic and hassle of navigation, you can book a private tour package that includes visiting, dining and transfer from us. Our local guide and driver will escort you to the Huangdi Mausoleum in Xi’an in the fastest and most convenient way and take care of all the details. You just have to focus on the visiting.