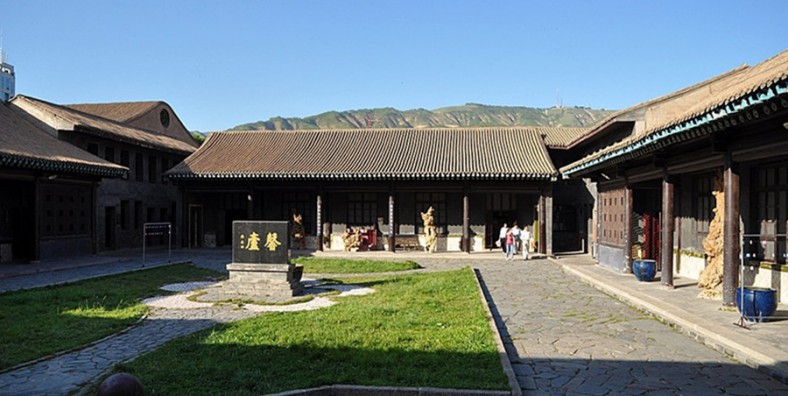 Ma Bufang Mansion is the most preserved Republic of China building in Qinghai Province. It is also the only official residence built in China with jade. The old name is “Xinyi” or “Jade Pavilion”, which has high historical value and richness. Local national cultural characteristics.

Why is Ma Bufang Residence So Special?

Ma Bufang Mansion is the most preserved Republic of China building in Qinghai Province. It is also the only official residence built in China with jade. The old name is “Xinyi” or “Jade Pavilion”, which has high historical value and richness. Local national cultural characteristics.

Ma Bufang Mansion was the mansion of the Chinese Muslim warlord and General Ma Bufang and his family from 1943–1949, and now is a tourist attraction, in Xining, Qinghai, China.

Ma Bufang was a Kuomintang party member, so the mansion has numerous portraits of the Kuomintang founder Sun Yatsen and Blue Sky with a White Sun flags. It also includes many portraits of Ma Clique warlords. Construction initiated on June 1942 and finished in June 1943. In total, the mansion comprises 290 houses occupying 6,000 square meters of a plot of 30,000 square metres located in East District of the city.

Ma Bufang (1903 – 31 July 1975)  was a prominent Muslim Ma clique warlord in China during the Republic of China era, ruling the province of Qinghai. His rank was Lieutenant-general. General Ma started a state run and controlled industrialization project, directly creating educational, medical, agricultural, and sanitation projects, run or assisted by the state.

Ma Bufang and his older brother Ma Buqing (1901–1977) were born in Monigou Township (漠泥溝鄉) in what is today Linxia County, 35 kilometres (22 mi) west of Linxia City. Their father Ma Qi (馬麒) formed the Ninghai Army in Qinghai in 1915, and received civilian and military posts from the Beiyang Government in Beijing confirming his military and civilian authority there.

His older brother Ma Buqing received a classical Chinese education, while Ma Bufang received education in Islam. Ma Qi originally had Ma Bufang study to become an imam while his older brother Ma Buqing was educated in the military. Ma Bufang studied until he was nineteen and then pursued a military career like his brother. Ma Bufang controlled the Great Dongguan Mosque. Ma was a graduate of the Officers’ Training Corps of Qinghai.

The best time to visit Xining and the surrounding areas is the period from May to September. Except the comfortable weather condition, many of the region’s colorful festivals occurs this time.

Summer in Xining is cool, with the daily average temperature lower than 17 centigrade. It is a good place to escape the unforgiving heat during summer time. The period from May to Sep. with the most weather condition is the best time to visit. High season prices do apply, however, and it’s more crowded.

Winter here is long and cold, but not freezing, with relatively little snow and rain. Spring is transient with sharp temperature swings. Autumn witness rapid temperature drops from its peak in July. Travelers and hikers are strongly advised to bring along thick overcoats in the mercurial winter months.

How to get to Ma Bufang Residence

If you want to get out of the traffic and hassle of navigation, you can book a private tour package that includes visiting, dining and transfer from us. Our local guide and driver will escort you to Ma Bufang Residence in Xining in the fastest and most convenient way and take care of all the details. You just have to focus on the visiting.