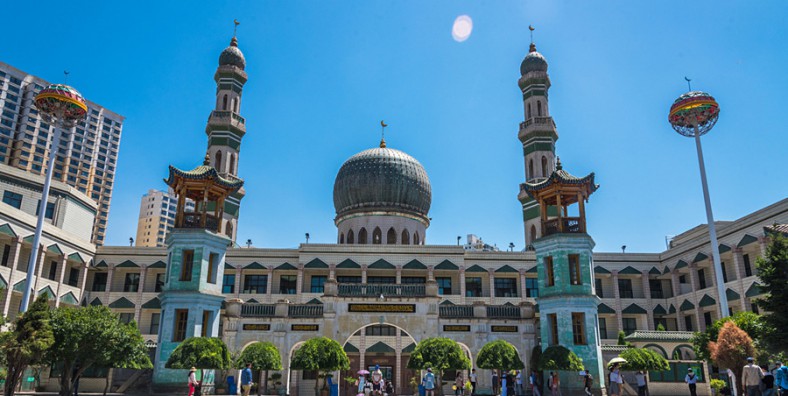 Situated in Dongguan Street, Xining City, Dongguan Mosque is the biggest mosque in Qinghai Province. It was built in 1380, and now boasts a history of more than 600 years. The Mosque is not only famous for its magnificent architecture but also as a religious education center and as the highest learning institution of Islam.

Why is Dongguan Great Mosque So Special?

Situated in Dongguan Street, Xining, Dongguan Mosque is the biggest mosque in Qinghai Province. It was built in 1380, and now boasts a history of more than 600 years. The Mosque is not only famous for its magnificent architecture but also as a religious education center and as the highest learning institution of Islam.

Restored recently, it was originally built in 1380 and has colorful white arches along the outside of the wide building. It has a green and white dome and two tall minarets. Generals Ma Qi and Ma Bufang controlled the Great Dongguan Mosque when they were military governors of Qinghai.

With its name “Xining Dongguan Great Mosque” shining at the top of a western-style entrance, the great mosque features a magnificent islamic architecture that combines together towers, walls and a temple-like main service hall. The mosque covers an area of 13,602 square meters now, and the construction area is 4,654 square meters. These buildings have a large scale, and combine the traditional Chinese architectural art with the Islamic architectural form. With the name of the mosque written on it, the gate is 10 meters high and 15 meters wide.

In 1998, a three-story modern building was built between the gateway and the street to house the mosque administration. Visited by as many as ten thousand worshippers during each one of the Muslim holidays, the Great Mosque of Xining is still the most important mosque in Qinghai and serves as a center of religious education for the region. The mosque is not of particularly Muslim architecture, normally easily differentiated from its Buddhist counterparts, but is more in the typical Chinese folk style. Beyond the square itself, the grand Domed Hall, housing up to 10,000 Muslim worshippers at peak times, is the highest Islamic education center in the province.

The best time to visit Xining and the surrounding areas is the period from May to September. Except the comfortable weather condition, many of the region’s colorful festivals occurs this time.

Summer in Xining is cool, with the daily average temperature lower than 17 centigrade. It is a good place to escape the unforgiving heat during summer time. The period from May to Sep. with the most weather condition is the best time to visit. High season prices do apply, however, and it’s more crowded.

Winter here is long and cold, but not freezing, with relatively little snow and rain. Spring is transient with sharp temperature swings. Autumn witness rapid temperature drops from its peak in July. Travelers and hikers are strongly advised to bring along thick overcoats in the mercurial winter months.

How to get to Dongguan Great Mosque

If you want to get out of the traffic and hassle of navigation, you can book a private tour package that includes visiting, dining and transfer from us. Our local guide and driver will escort you to Dongguan Great Mosque in Xining in the fastest and most convenient way and take care of all the details. You just have to focus on the visiting.