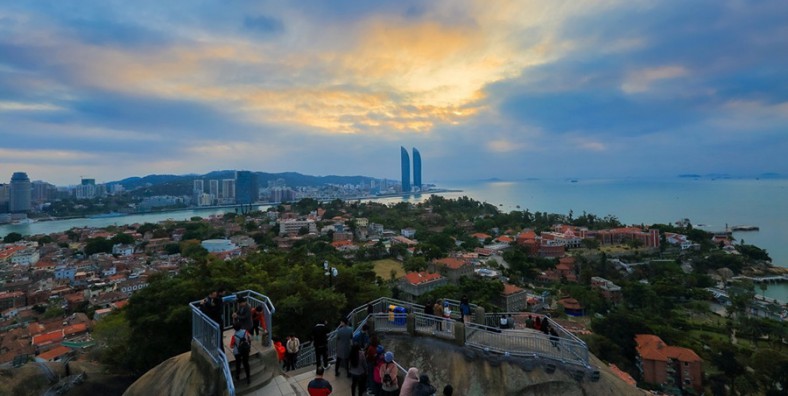 Visit Gulangyu Island is just like a time travelling to the past, and few things have changed on the island since foreigners settled in Xiamen (Amoy) to do business. There are no cars on the island, and you can hike up the hill, bask on the beach, walk along the esplanade, admire colonial buildings, visit museums and taste the delicious local food.

Why is Gulangyu Island So Special?

Besides the island’s historic significance as an international port, Gulangyu is a great place to escape from city traffic and highrise, though Xiamen has consistently been voted as one of the most livable cities in China, and Gulangyu Island has been recognized as one of Fujian Province’s most scenic places.

Gulangyu is directly off the southeastern coast of China, and the quaint tourist attraction is part of the bustling city of Xiamen. The island is famous for its natural beauty, colonial style architecture and a myriad of interesting museums. Gulangyu Island is located just southwest of Xiamen City. Visitors can reach it by steamship from Xiamen City in about 5 minutes. This scenic area is renowned for its delicate natural beauty, its ancient relics, and its varied architecture. The island is on China’s list of National Scenic Spots and also ranks at the top of the list of the ten most-scenic areas in Fujian Province. In July 2017, it was listed as a world heritage site by the UNESCO.

Gulangyu Island had been the colony of western countries for nearly a hundred years since the First Opium War (A.D. 1840 – 1842). Since then, preachers and merchants from western countries have built various churches, mansions, schools, hospitals, etc. on the island. The island has made little changes since then. Now, there are thousands of well-preserved architectures of various styles (both Chinese style and western styles) on the island; thus, Gulangyu Island is also called the World Architecture Expo. Besides the architecture, western music was also brought into this island in the 19th century, and the island raised many famous Chinese musicians. It’s named as The Island of Music by Chinese Musicians Association in 2002.

And on July 8th, 2017, on the World Heritage Convention held in Poland, Gulangyu Island – a Historic International Settlement was declared a UNESCO World Heritage Site, and it is now the 52nd World Heritage site in China (China’s World Heritage Site Lists). Compared to other world heritage sites, Gulangyu is young. However, for over 100 years, the 931 constructions of various styles, periods, and cultures have formed the feature of this unique place, and it perfectly represents the inclusive, multi-cultural, kind characteristics of Gulangyu and also the harmonious mixture of the modern human resident concept and local traditional culture.

Sunlight Rock Scenic Area is located at the south-central of Gulangyu Island, and it can be divided into two parts -Sunlight Rock and Qin Garden. Sunlight Rock refers to two huge rocks, and they lean on each other, with one horizontal and the other vertical. With an altitude of 92.7m, Sunlight Rock is the highest point on the island.

Built in 1913, sitting in the southern part of Gulangyu Island, facing the sea with Sunlight Rock sitting behind it, Shuzhuang Garden was once the private garden of Lin Erjia – a wealth Taiwan merchant. In 1955, the garden was donated to the government, and it’s a public garden since then. The garden has two parts – Garden Hiding the Sea and Garden Making-up Hills, and both of them were layout taking the advantage of the natural terrain.

Piano Museum is an interesting attraction in Shuzhuang Garden. Located at Tintaoxuan, it covers an area of 450m². The museum has two floors, and it displays over 70 old pianos donated by Hu Youyi – an overseas Chinese pianist and piano collector born in Gulangyu Island.

Haoyue Garden situates at the southeast of Gulangyu Island, with Lu River next to it. It’s a memorial garden built to memory Zheng Chenggong, who successfully recaptured Taiwan in 1661. The garden is centered on Zheng Chenggong’s  sculpture, a 15.7m high granite rock sculpture, and architectures modeled after the architecture style in Ming Dynasty distribute around the sculpture.

Organ Museum is located at Bagua Mansion in the northwest of Gulangyu Island, and it’s the largest organ museum in the world (the only one in China). The exhibitions in the museum are also donated by Hu Youyi, just like the Piano Museum.

How to get to Gulangyu Island

If you want to get out of the traffic and hassle of navigation, you can book a private tour package that includes visiting, dining and transfer from us. Our local guide and driver will escort you to Gulangyu Island in Xiamen in the fastest and most convenient way and take care of all the details. You just have to focus on the visiting.

How to go to the Gulangyu Island from Xiamen

At night (17:50 – 06:30 next day):
From Hall 2 of Xiamen Lundu Ferry Terminal near Zhongshan Road, take a ship to Sanqiutian Wharf. The roundtrip fare is CNY 35 and it takes about 7mins.