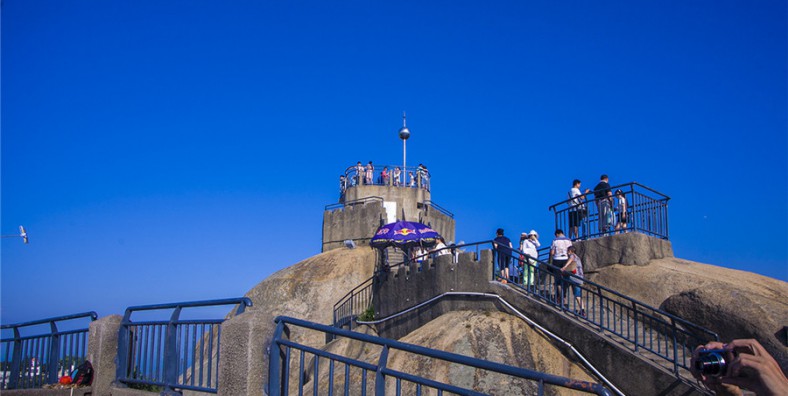 Situated at the top of Dragon Head Hill in the central by South of Gulangyu Island, Sunlight Rock consists of two huge rocks, one horizontal and other vertical. The two rocks leaning on with each other, with a horizontal of 92.68 meters, form the highest spot of Gulangyu Island.

Best Seasons: All year round, spring and autumn best.

Why is Sunlight Rock Scenic Area So Special?

Situated at the top of Dragon Head Hill in the central by South of Gulangyu Island, Sunlight Rock consists of two huge rocks, one horizontal and other vertical. The two rocks leaning on with each other, with a horizontal of 92.68 meters, form the highest spot of Gulangyu Island. A huge rock is piercing into the sky. The lofty and rugged rocks in the mountain form many caverns and gullies, while pavilion, kiosks and terraces are tucked away in the lushly growing woods.

When Zheng Chenggong, a national hero, recovered Taiwan, his troops were stationed here, leaving behind a lot of moving stories. Climbing the hill along the steps, tourist will see Lotus Nunnery, and some stone inscriptions– “A Heavenly Abode on Gulangyu Island,””No. 1 on the Egret River,” and “Ancient Summer Resort Cave,” the Longtou Mountain Fastness of Zheng Chenggong and the ruins of the drilling terrace on water.

What to see in Sunlight Rock Scenic Area?

Sunlight Rock’s oldest carving was inscribed about 400 years ago on a rock near the main gate and reads, “Gulang Dongtian”: “Gulangyu-a Fairyland.” The 100-year-old characters to the left read, “Lujiang Diyi (鹭江地邑)“. The horizontal characters, “Tianfeng Haitao (天风海涛)“, carved in 1915, suggest that you can hear both roaring wind and raging sea as you climb Sunlight Rock.

Sunlight Rock Temple, one of Xiamen’s four most important temples during the Ming and Qing Dynasties, was built between 1506 and 1521 and called Lotus Temple. It was rebuilt in 1596 and renamed Sunlight Rock Temple, and is now dedicated to worship of Guanyin, goddess of mercy (a formerly male deity whom Chinese women changed to female over 1,000 years ago because they felt male deities were unsympathetic to their needs).

How to get to Shuzhuang Garden

If you want to get out of the traffic and hassle of navigation, you can book a private tour package that includes visiting, dining and transfer from us. Our local guide and driver will escort you to Sunlight Rock Scenic Area in Xiamen in the fastest and most convenient way and take care of all the details. You just have to focus on the visiting.

The ferry departs every 20–30 minutes and takes about 8 minutes.