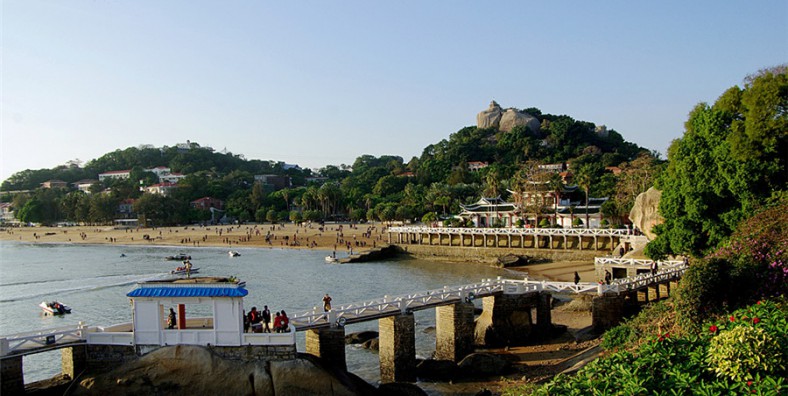 Shuzhuang Garden is located on the south side of Gulangyu Island, Fujian Province. Built in 1931, its original use was as the privet villa of Lin Erjia, a wealthy businessman from Taiwan, who built a replica of his father’s residence in Taipei. The place opened to the public in 1955 after it was donated to become a garden.

Why is Shuzhuang Garden So Special?

Shuzhuang Garden is located on the south side of Gulangyu Island, Fujian Province. Built in 1931, its original use was as the privet villa of Lin Erjia, a wealthy businessman from Taiwan, who built a replica of his father’s residence in Taipei. The place opened to the public in 1955 after it was donated to become a garden.

It is purposely built between sea and hills in a clever layout that takes advantage of the natural terrain, using gardening techniques such as “hiding elements”, “borrowing from the surroundings” and “combing movements” to achieve an illusion of infinite space and surprise the visitor in every step.

Lin family was originally from Fujian Province, and later moved to Taiwan where they built a magnificent villa, named “Banqiao Villa”; it was the place that Lin Erhia spent his happy childhood. Since Taiwan was ceded to Japan in 1895, Lin’s father moved the family back to Gulangyu Island and was active in local industry and public welfare establishments. After his death in 1905, his son, Lin Erjia followed his footsteps and became a prestigious squire in the area.

To memorize Taiwan and his old house Banqiao Villa, Lin Erjia had famous designer and skilled workmen built a new villa in 1913 on the island, which was an imitation of Banqiao Villa but added in new elements of southern gardens. The name of the villa “Shuzhuang” comes from the name of the founder Lin Shuzang (another name of Lin Erjia). After the anti-Japanese war in 1945, Lin moved to Taiwan again and spent his final years in the old villa. And his villa in Gulangyu was just donated to the country by his relatives in 1955 after his death.

What to see in Shuzhuang Garden?

In Bushan Garden, there are Hard Stone House (the study room of the master), the courtyard Yi Ai Wu Lu (means I love my house), Twelve Holes, Tingchao Pavilion (a pavilion for listening to the tides) and Xiaolan Pavilion. The Twelve Holes are serial holes built according to the Chinese era; it is a playing place for children and often creates a dynamic scene compared to the peace of the surrounded pavilions and scenes.

How to get to Shuzhuang Garden

If you want to get out of the traffic and hassle of navigation, you can book a private tour package that includes visiting, dining and transfer from us. Our local guide and driver will escort you to Shuzhuang Garden in Xiamen in the fastest and most convenient way and take care of all the details. You just have to focus on the visiting.

The ferry departs every 20–30 minutes and takes about 8 minutes.