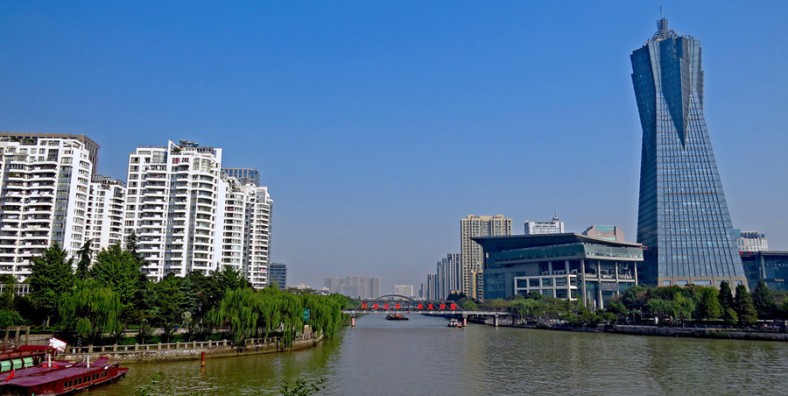 The Grand Canal, known to the Chinese as the Jing–Hang Grand Canal, a UNESCO World Heritage Site, is the longest as well as the oldest canal or artificial river in the world. Starting at Beijing, it passes through Tianjin and the provinces of Hebei, Shandong, Jiangsu and Zhejiang to the city of Hangzhou, linking the Yellow River and Yangtze River.

Address: Starts at Beijing in the north and ends at Hangzhou in the south, running through Tianjin, Hebei Province, Shandong Province, Jiangsu Province and Zhejiang Province along its way.

Why is Grand Canal in Hangzhou So Special?

China’s legendary man-made waterway, the Grand Canal, runs from Beijing in the north to Hangzhou in the south stretching 1,747 kilometers. At 10 times the length of the Suez Canal and 20 times that of the Panama Canal, it is another wonder made by the ancient Chinese. The Hangzhou section of the Grand Canal starts from Tangqi town in Yuhang district in the north and ends in the Qiantang River to the south. It runs across four urban districts in the city of Hangzhou, Yuhang, Gongshu, Xiacheng and Jianggan.

Interconnecting five rivers, the Haihe, Yellow River, Huaihe River, Yangtze River and the Qaintang River, the canal served as a significant means of transportation for centuries. It facilitated the transport of food and goods from the south to the north and boosted commercial development in the country. The section from Suzhou to Hangzhou is still in active use today, with vendors rowing their boats directly to households and shops in local townships.

Grand Canal in the Spring and Autumn Period

The king of the state of Wu in the Spring and Autumn Period (770 BC-476 BC), Fu Chai, ordered the Hangou Canal to be dug (from the present Yangzhou to Huai’an) in the 10th year (486 BC) of his reign, and he planned a scheme to crusade against the state of Qi in the course of battling for supremacy in the Central Plain Area.

Hangou Canal was connected with Jiang River and Huai River. Dagou Canal (from the present Yuanyang County of Henan Province to Zhengzhou) was dug in the Warring States period (475 BC-221 BC), which linked the Jiang River, the Huai River, the He River and the Ji River as one.

Grand Canal in the Sui Dynasty

Known as Suitang Great Canal in the Sui Dynasty (581-618), the Great Canal was expanded under Emperor Yang’s (569-618) order to exert more control over the Yangtze River Delta. Emperor Yang ordered the building of the 1,000 kilometers (621 miles) long Yongji Canal (from the present Louyang to Beijing) in 603, the 1,000 kilometers (621 miles) long Tongji Canal (from the present Luoyang to Huai’an of Jiangsu Province) in 605 and the 400 kilometers (249 miles) long Jiangnan Canal (from the present Zhenjiang of Jiangsu Province to Hangzhou) in 610. Over 3.1 million slaves and criminals were forced by Emperor Yang to build the Grand Canal during the Sui Dynasty (581-618), 2.5 million of whom died owing to overwork and disease.

Main Attractions Along The Grand Canal

If you’re more interested in cultural relics, it’s advisable for you to visit the Great Wall and Forbidden City of Beijing, the Humble Administrator’s Garden and Tiger Hill of Suzhou, and Linyin Temple and Six Harmonies Pagoda of Hangzhou. For those who prefer exploring the charms of China’s ancient water towns, you’re highly advised to visit Xitang Town of Hangzhou and Tongli Town of Suzhou.The tourist resources along the Beijing-Hangzhou Grand Canal are rich and colorful, which meet the demands of visitors of various tastes.

If you are interested in natural scenery, you’re highly recommended to visit the West Lake of Hangzhou, Turtle Head Island of Wuxi, Geyuan Garden in Yangzhou and Beihai Park of Beijing. In addition, it’s worth taking a cruise from Hangzhou to Suzhou to explore the ancient folk customs of the southern Yangtze River delta, and the night cruise is wonderful.

How to get to Grand Canal in Hangzhou

If you want to get out of the traffic and hassle of navigation, you can book a private tour package that includes visiting, dining and transfer from us. Our local guide and driver will escort you to Grand Canal in Hangzhou in the fastest and most convenient way and take care of all the details. You just have to focus on the visiting.

2 thoughts on “Grand Canal in Hangzhou”