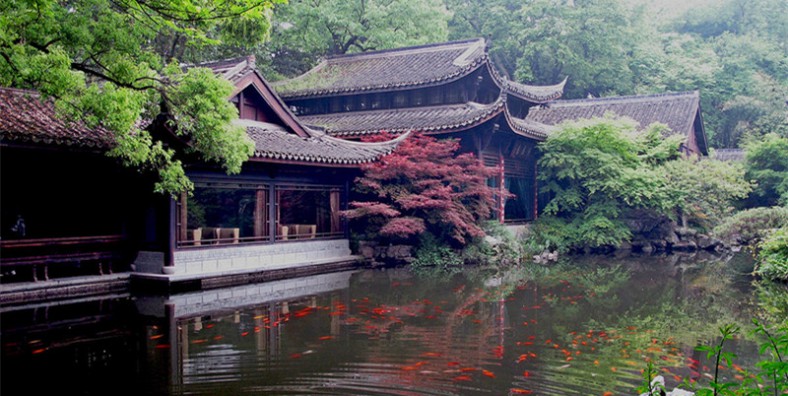 Viewing Fish at Flower Harbor is located on the south side of West Lake. Here was once a private house that has no become a beautiful free park. It is one of the "10 Sights of West Lake". Fish Viewing at Flower Harbor is named after the school of red snapper in the red pond. There are always adults and children tossing feed and bread to the fish, what a joy! West of the Red Fish Pond is the Peony Garden where many tree and flower peonies.

Why is Viewing Fish at Flower Harbor in Hangzhou So Special?

Hua Gang Guan Yu ( Viewing Fish at Flower Pond ) is also one of top ten views of West Lake with three spotlights – the fish, the flower and the stream. In the Red Carp Pond , tourists will view  the red carps, which is considered as the chief attraction of the park.

Flower Harbor (Huagang) Park is adjacent to Su Causeway consisting of Red Fish Pool, Peony Garden, Flower Garden, widespread lawns and woods, occupying an area of 21 hectares. The garden was located near the Flower Home Hill. Inside the park was a fishpond and a stream nearby was ushered into the pond for raising goldfish. Later the private garden began to gain a big fame in Hangzhou as Flower Harbor and became a recreation resort for viewing goldfishes.

Painters and poets vied each other for depicting the garden in their inspirational artworks. In the Qing Dynasty, the park was relocated in today´s place, much nearer to the West Lake.Emperor Qianlong of the Qing Dynasty visited the Park on one of his inspection trips to this part of China.

The history of Viewing Fish at Flower Harbor can be dated to the Southern Song Dynasty (1127-1279). Back then, the government official Lu Yunsheng built a private garden at the foot of Flower Hill (Huajia Hill). He dug a pond, and raised various fish in it. The garden was first called Lu Garden, and then became known as Flower Harbor. Later, Ma Yuan, a great painter of the Southern Song Dynasty, depicted the scene when he created the Ten Paintings of West Lake. From then on, the beautiful scene has been known as ‘Viewing Fish at Flower Harbor’.

After entering the park, you will first see the Imperial Stele Pavilion. The stele was constructed in 1699, and renovated in 1869. On the front of the stele is the inscription ‘Viewing Fish at Flower Harbor’ handwritten by Emperor Kangxi of the Qing Dynasty (1644-1911). There is an interesting anecdote about the inscription. The traditional Chinese character ‘fish’ has four dots at the bottom. But Emperor Kangxi only wrote three. Four dots in Chinese mean fire, over which fish are cooked; while three dots mean water, in which fish can live happily. It shows the best wishes of the emperor for the fish as well as his people. The back of the stele is engraved with a poem which reads ‘At Flower Harbor at the foot of Flower Hill, petals fall down onto fish.’ It is a beautiful image, isn’t it?

Keep moving and you will reach Red Carp Pond, the highlight of the park at its very center. Leaning on the railings of the zigzag bridge, you can see thousands of red carp swimming in the pond. If you throw food into the water or clap your hands, a swarm of red carp will gather rapidly, and redden the pond in seconds. Some of the fish open their mouths wide to wait for food. Others catch the food immediately when it falls into water, and some will eagerly jump out of the water for food. That is very spectacular and interesting!

To the west of Red Carp Pond is the Peony Garden, which covers a total area of 1 hectare (2.5 acres). The crisscrossing pebble paths divide the garden into eighteen sections. More than one-hundred species of peony flowers are planted here, along with green pines, vibrant cypresses, red maples, and plum blossom trees. There is an octagonal double-eave Peony Pavilion in the garden. The tablet of the pavilion was written by the famous writer Mao Dun. The pavilion is a perfect spot to enjoy the beautiful scenery of the entire park. You can admire the exuberant lawn to the north, the lush trees to the east, green Nanping Hill to the south, and the clear West Inner Lake and South Lake.

How to get to Viewing Fish at Flower Harbor in Hangzhou

If you want to get out of the traffic and hassle of navigation, you can book a private tour package that includes visiting, dining and transfer from us. Our local guide and driver will escort you to Viewing Fish at Flower Harbor in Hangzhou in the fastest and most convenient way and take care of all the details. You just have to focus on the visiting.

By boat:
Take the West Lake Cruise Boat. Get off at Su Causeway, and enter the park through the east gate.