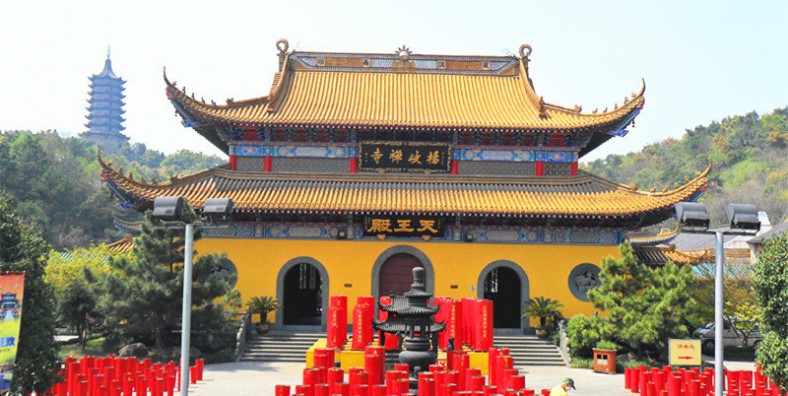 Jingci Temple is located at the foot of Huiri Peak of Nanping Hill. It is the second prominent Buddhist temple around West Lake. Together with Lingyin Temple, it is called the jewel of the southern and northern hills. The temple was claimed as a national key Buddhist temple in Han's area by state council in 1983.

Why is Jingci Temple in Hangzhou So Special?

Jingci Temple has a history of more than 1,000 years. It was first named “Huiri Yongming Temple” and was renamed Jingci Temple in the Southern Song Dynasty, known as the “Four Temples of the West Lake” along with the Lingyin Temple, Zhaoqing Temple and Duiyin Temple.

Jingci Temple is located at the foot of Huiri Peak of Nanping Hill. It is the second prominent Buddhist temple around West Lake. Together with Lingyin Temple, it is called the jewel of the southern and northern hills. The temple was claimed as a national key Buddhist temple in Han’s area by state council in 1983.

Jingci Temple was initially called Huiri Yongming Temple (慧日永明院). It was first built in AD 954 by Qian Hongji (钱弘俶) of Wuyue Dynasty for a famous monk Yongming Yanshou. In South Song Dynasty, its name was changed to Jingci Temple, and the “500 Luohan Hall” was built. The temple was destroyed and rebuilt several times in the history. The majority of present temple was built in 1980’s. Specially, there is a newly forged copper bell, weighing over 100 Kilograms. On it is carved The Lotus Sutra (妙法莲花经), with 68,000 characters. It hosts one of Ten Scenes of West Lake, “Evening Bell Ringing at the Nanping Hill” (南屏晚钟).

The temple used to have a hall of 500 Arhats, the first and only one in China. Many famed Buddhist monks used to stay in the monastery. The Caodong Sect, a quite popular Buddhist sect in Japan, originated in the Jingci Temple. In its history the temple has suffered from serious damages. Today part of it has been repaired, including the temple’s gate with the two gate-generals Heng and Ha, the Shrine of Sakyamuni Buddha, the rear hall, and the Belfry.

The “Wood-Carrying Well” is a special attraction of the temple. There is a large piece of wood floating on the surface of the water in the well. It was allegedly left by Master Ji when he used his superhuman power to carry wood through the well to build the temple.

And the Bell Pavilion, a two-storied highly decorated affair, houses a two-ton bell in stationary suspension. In recent years, Hangzhou celebrities of various trades, foreign guests, overseas Chinese and visitors will gather inside Bell Tower of Jingci Temple and strike the bell to ring out the Old Year and ring in the New Year on New Year’s Eve of lunar calendar. When the 108th stroke is made, it means that the very beginning of a New Year is coming. In this way, the ancient bell gives out new sound for the ever-growing new era. This activity of striking bell at New Year’s Eve, which symbolizes harmony, happiness, stability and unification, adds new meaning to ancient Evening Bell Ringing at Nanping Hill and makes it even more appealing.

How to get to Jingci Temple in Hangzhou

If you want to get out of the traffic and hassle of navigation, you can book a private tour package that includes visiting, dining and transfer from us. Our local guide and driver will escort you to Jingci Temple in Hangzhou in the fastest and most convenient way and take care of all the details. You just have to focus on the visiting.