Jiujiang is a significant transportation hub since ancient times. Dependent on the Yangtze River and the Beijing-Jiulong Railway, it has well developed its land and water transportation routes.

How to Get to Jiujiang

2. Jiujiang South Coach Station (九江汽车南站)
Address: No. 37, Shili Avenue, Xunyang District (九江市浔阳区十里大道37号)
Tel: 0792-8117380
It is almost in the center of Xunyang District. And it is very close to some scenic spots, including Gantang Lake, Nengren Temple and Tianhua Palace.

3. Jiujiang West Coach Station (九江客运西站)
Address: Shili Avenue, Jiujiang City (九江市十里大道)
Tel: 0792-8113649
This coach station is built in recent years, so it is well-equipped. It offers buses to counties of Jiujiang and cities of Jiangxi like Nanchang, Shangrao etc.

The roads extend in all directions, which makes Jiujiang become one transportation hub of Jiangxi. There are some highways like Chang-Jiu Motorway, G70 Fu-Ying Motorway, G56 Hang-Rui Motorway, Jiu-Rui Motorway, Du-Jiu Motorway etc. In addition, there are 4 national highways passing by Jiujiang, including National roads No. 105 between Beijing and Zhuhai, No. 316 between Fuzhou and Qinghai, No. 351 between Sichuan and Zhejiang and No. 530 between Anhui and Jiangxi.

There are Gan River, Fu River, Xin River, Xiushui River as well as Rao River in Jiujiang. Besides, Yangtze River is also flowing past Jiujiang. Therefore, water transportation is always developed. More significantly, there is Jiujiang Port which is the biggest port in Jiangxi.

How to Get Around Jiujiang

There are more than 10 taxi companies in Jiujiang, and they have more than 2, 000 taxis through which visitor can go to almost every scenic spot of Jiujiang. The starting price is about 7 yuan within 2 kilometers.

There are a great number of shared bicycles provided by Alibaba. Visitors just need to download an app if they want to ride a bike. In addition, many stores in scenic spots also provide bicycles.

The bus public transport of Jiujiang is mainly operated by Jiujiang Bus Company. It offers mora than 50 bus lines, including 1 line between two provinces and 5 lines between the urban area and rural area. All of bus lines can take visitors to most scenic spots. The ticket for ordinary buses is 1 yuan, and the price for air-conditioned buses is 2 yuan. 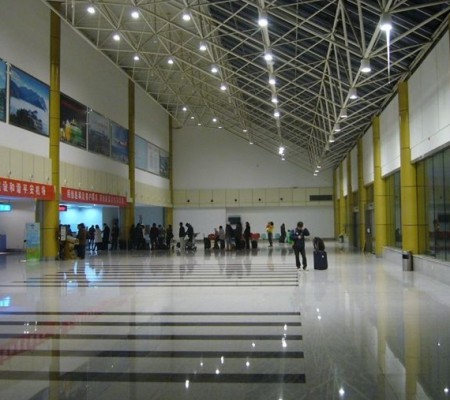 Jiujiang Lushan Airport (Chinese: 九江庐山机场) (IATA: JIU, ICAO: ZSJJ) is an airport serving Jiujiang, a city in the province of Jiangxi in China. The airport began operations on June 18, 1998. All flights from the airport were suspended on March 21, 2015. The airport...