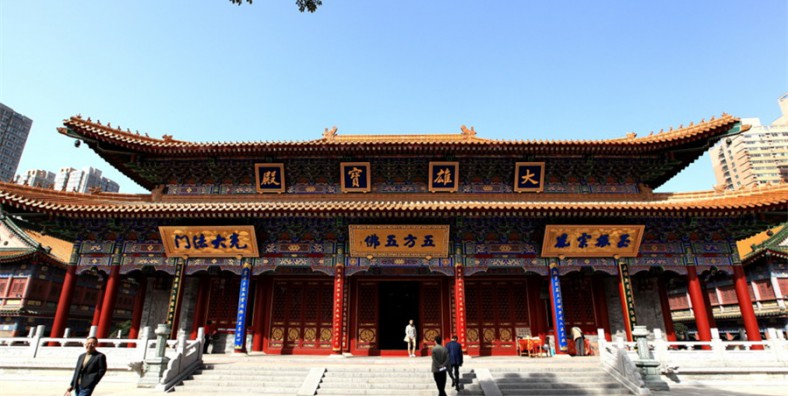 Daxingshan Temple was built in the early Jin Dynasty. During the first year of Emperor Xuanzong of the Tang Dynasty, the Indian monk Shan Yuanzhi, Jin Gangzhi, who was known as the "Three Great Tutors of Kaiyuan", taught the Tantric Buddhism to this monastery and became one of the three major translation sites of Changan's Buddhist scriptures. Among them, the monks are available to preside over the translation service in Daxingshan Temple, and also held the initiation ceremony for the emperor of Datang. He has made indelible contributions to the study and promotion of Buddhist classics, and the temple has also become the birthplace of Chinese Buddhism Tantra.

Why is Daxingshan Temple So Special？

Where is The Daxingshan Temple?

Situated on West Xingshansi Street in the business quarter Xiaozhai of southern Xi’an, Daxingshan Temple is a pure and peaceful Buddhist space in the prosperous metropolis. Originally built in 265-289 in the Jin Dynasty (265-420), this temple is one of the oldest Buddhist temples in China and a birthplace of Chinese Tantric Buddhism (Vajrayana). During the Sui and Tang Dynasties (581-907), Buddhism prevailed widely in Chang’an (today’s Xi’an). Many Indian monks translated Buddhist sutras and promulgated Buddhist doctrines here. At that time, the Daxingshan Temple became one of three sutras translation sites, together with Da Ci’en Temple and Jianfu Temple.

With an area of 8 hectares (19 acres), the Daxingshan Temple has 243 halls and rooms for monks. In the temple, there are some kinds of trees with great value, beautiful flowers, famous paintings and stone tablets which record the restorations of the temple. Because of the wars through dynasties, it was destroyed many times and the present temple was rebuilt in 1955 and 1983. The surviving buildings mainly feature the Ming Dynasty (1368-1644) style. They are neatly arranged in a row on a north-south axis.

Buddhism is thought to have existed before the Qin Empire destroyed it. Then during the Han Empire period through Silk Road contact, the religion was reestablished. It is said that during the Jin Dynasty era (265-420) in the state of Later Qin (384-416) that controlled the area around Chang’an or modern Xi’an, about 90 percent of the people became Buddhists. This was thought to be mainly through the rule of Emperor Yao Xing who was taught by a monk named Kumarajiva who was an important translator of Buddhist scriptures into the local language. He and his disciples worked at translating scriptures at Caotang Temple about 30 kilometers or 25 miles southwest of Xi’an.

When the Tang Empire built its capital, the Daxingshan Temple was enclosed within the city walls of Chang’an. It is said that the temple was destroyed in the 840s during the Tang era. It was rebuilt during the Qing Dynasty era in 1725. It was rebuilt or restored again in 1956 and 1983. The architecture now is Qing-era style. After 1956, the temple was used by Tibetan Buddhist monks. Their worship ended in the Cultural Revolution. The area is now part of a public park, and pious Buddhists go there to worship.

Hall of Heavenly Kings is the most spectacular hall in the north-south axis. On it the statues of the Four Heavenly Kings, also called the Guardians of the Four Quarters, stand on the east and west sides. Inside, smiling and bellied Maitreya is enshrined and behind it is a Ming Dynasty wood-carved Wei Tuo, the guardian angel of the Buddhist temples.

The grand and imposing Guanyin Hall enshrines Guanyin, or ‘Born of the Lotus’, a deity known across all Asia as ‘the Goddess of Mercy’. In Chinese Buddhism, she is regarded as a personification of compassion, goodness and wisdom, and therefore is worshiped by Chinese people. The golden Guanyin is portrayed as thousand armed bodhisattva with a thousand eyes, which may greatly surprise you. The hall with carved beams and painted rafters is magnificent. In its front, a delicately-carved guardrail made of bluestones is also worthy of your appreciation.

Built in the Ming Dynasty, the Main Hall looks quite simple and solemn. When you come into the hall, the first thing to catch your eye is a group of five golden Buddha figures, which represent five directions (east, south, west, north and center). In its two sides are enshrined the statues of arhats in the Qing Dynasty (1644-1911). In its front there are two stone tablets which are separately inscribed with Buddhist sutras and an historical record of the temple.

Situated between the Main Hall and the Goddess of Mercy Hall, there was a Zhuanlun Sutras Depository Hall. Originally built in the Tang Dynasty (618-907), it was a place for collecting Buddhist scriptures. ‘Zhuanlun’ means rolling wheel which symbolizes that the dharma never stops to turn around. Later, the hall was destroyed by the war. The site remains a 15-meter-wide (49-foot-wide) and 1-meter-high (3-foot-high) square earthen platform. More than two dozen big footstones still can be seen on the ground.

Masters often give lectures on Buddhist classics in Sutras Collection Tower which has a plaque on its gate. The plaque is inscribed with four Chinese characters: ‘Jue Wu Zhong Sheng’ (it means to enlighten all living beings) written by Guangxu Emperor in the Qing Dynasty. Inside, Vairocana is enshrined. The tower, together with the south God of Mercy Hall, the east Yufo Hall and Wofo Hall constitutes a courtyard where visitors are welcomed by towering and thick cypresses, and a more than 300-year-old Chinese wisteria that was planted near the end of the Ming Dynasty.

How to get to Daxingshan Temple

If you want to get out of the traffic and hassle of navigation, you can book a private tour package that includes visiting, dining and transfer from us. Our local guide and driver will escort you to the Daxingshan Temple in Xi’an in the fastest and most convenient way and take care of all the details. You just have to focus on the visiting.