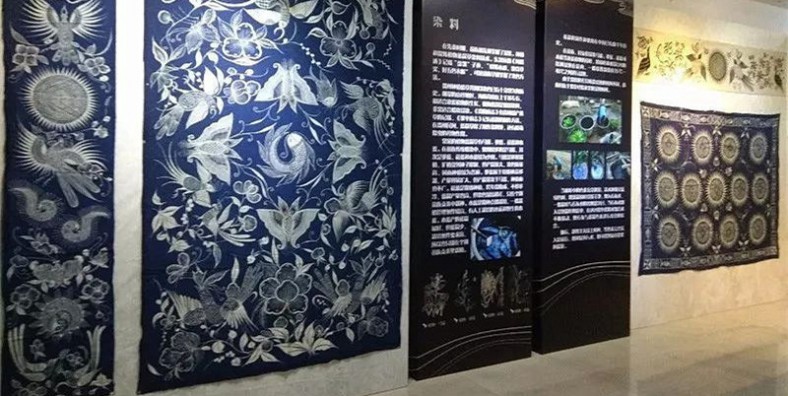 It is a key cultural relic protection unit in Guizhou Province. Batik is an ancient folk traditional manual painting and dyeing art with a long history.

Why is Batik Museum so Special?

The precursor of Guizhou Batik Museum is the “Guizhou Batik Cultural Exhibition”, housed in the Anshun Confucian Temple, an important preserved cultural relic in Guizhou Province. Batik Museum has a total of three exhibition halls with a collection of 304 pieces. Most of the collections cover living goods to art works.

Where is Batik Museum

Located on Qianjin Road, Anshun City. Batik pattern has a strong ethnic color and is a rare flower of ethnic art with Chinese characteristics.

Batik is an ancient folk traditional manual painting and dyeing art with a long history. At least in the Qin and Han dynasties, the ancestors of Miao, Yao, Buyi and other ethnic minorities in southwest China had invented and mastered batik technology. This technology has been further developed in later generations and has been preserved in Guizhou’s ethnic minority areas until today.

In 1982, Guizhou Provincial People’s Government approved and announced it as a provincial cultural relic protection unit.

The collection of 304 exhibits, most of which are real objects, is extremely rich in content from ancient times to the present, from folk to factories, from daily necessities to works of art, from primitive patterns to modern patterns. The exhibition will not only help the development and utilization of batik technology, but also provide important materials for the study of ethnic, folk, archaeological, arts and crafts.

Due to the construction on the slope, the four-way building also rises. From the main entrance of the temple to the first courtyard, there is a half-moon pool called pan pool.

Batik pattern has a strong ethnic color and is a rare flower of ethnic art with Chinese characteristics.

Guizhou is located on the edge of the Yunnan-Guizhou plateau, surrounded by mountains. Miao village has been an amphibious transportation center since ancient times. This is rich in tourism resources. Guizhou has a subtropical humid climate with an annual average temperature of 16.4 degrees and four distinct seasons. Therefore, it is an ideal tourist destination all the year round.

1. take bus no 9 from bus east station to Xiaomeishan station and walk about 140 meters to reach it;

2. take bus no 12 from bus east station to get off at national middle school station.