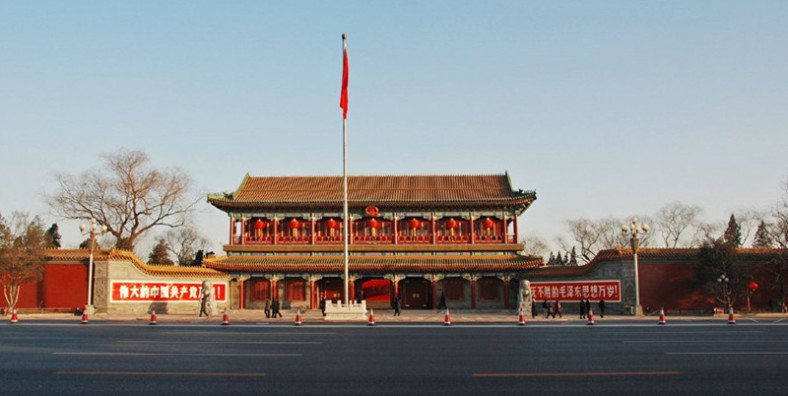 Why is Zhongnanhai so Special?

It is the office of the State Council and other important organs of the People’s Republic of China, and is regarded as a symbol of the Chinese government. Chairman Mao, premier Zhou, Liu Shaoqi and other party and state leaders used to live here, as did the central Committee of the communist party of China and the state Council.

To the west of the Forbidden City lie three ‘seas’, the Northern Sea, the Central Sea and the Southern Sea. Actually they are not seas, just big lakes. The Northern Sea is now the beautiful lake inside the Beihai Park. The Central and Southern Seas are collectively referred as Zhongnanhai. With an area of 1,500 acres of which 700 acres is lake, Zhongnanhai, although a garden with exceptional scenery, is more popularly known as the symbol of China’s central government and the metonym for the Chinese leadership. Chairman Mao Zedong and Premier Zhou Enlai once resided here. Now, the top leaders of the Chinese state carry out many daily administrative affairs inside Zhongnanhai.

Some sites in the Southern Sea area, including the Yingtai Island, Yinian Hall, the Chrysanthemum Study (Chairman Mao’s former residence), had once been open to the public during important holidays and weekends between 1977 and 1985. At that time, some ordinary people’s long-cherished wish of visiting the garden came true. However, Zhongnanhai is not open to the public at present. Beijing Tourism Bureau has been actively promoting the reopening of the garden for common sightseeing. The garden now is a political synonym for mystery and solemnity. The following introduction provides an insight of this mysterious site in Beijing.

The offices of the Central Committee and the State Council

The main gate of Zhongnanhai is the south gate, also known as xinhua gate. It is the symbol of Zhongnanhai and faces Chang ‘an Avenue. A five-star red flag flies high at the gate. Sentinels at the gate stand guard solemnly and face the surging traffic of Chang ‘an Avenue day and night. Passers-by will be attracted by Mao Zedong’s five gleaming golden characters of “serving the people” when they pass through the open door.

Opening to the outside world

Until May 1980, the long-cherished wish of ordinary people to enter Zhongnanhai was fulfilled. At that time, Zhongnanhai began to organize mass tours on important festivals and on Saturdays and Sundays. The number of visitors is large, sometimes exceeding ten thousand a day.

Forbidden City: Forbidden City , officially called Gugong (故宫Chinese name), was the imperial palace for 24 Emperors of Ming and Qing Dynasties until the overthrow of Qing Dynasty, now is open to the public as the Palace Museum.

National Museum of China: The museum is divided into five floors and has 48 exhibition halls. It is one of the museums with the richest collection of cultural relics in China. It covers all stages from ancient times to present.