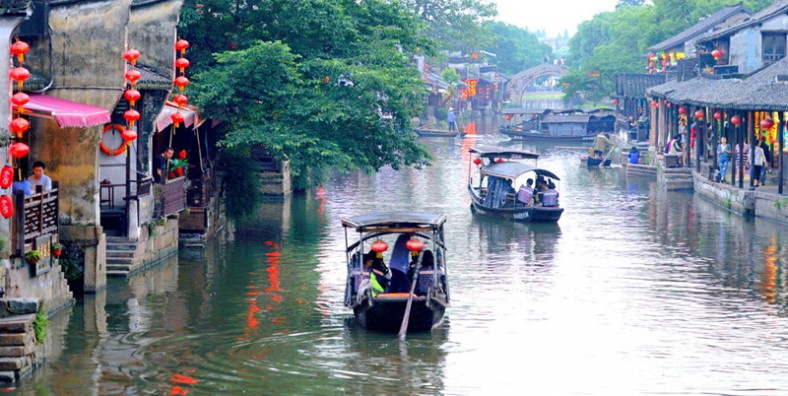 Xitang is a living ancient town with a history more than one thousand years. It is featured in 104 old bridges, 122 old lanes, long ceilinged corridors. The local residents have been keeping easygoing and peaceful lifestyle, making Xitang a fantastic place to experience a feeling of simplicity and leisure.

Xitang is also famous for its numerous bridges, alleys and roofed corridors. With simple folk custom, melodious paddling sounds, and unique cultural trait, Xitang draws tourists and photographers from all over the world. It is one of six famous water towns (Zhouzhuang, Tongli, Luzhi, Xitang, Wuzhen, and Nanxun) in Lower Yangtze River Region.

Xitang is one of the birthplaces of ancient Wu-Yue Culture (a culture developed in Tai Lake region and Zhejiang Province). In Spring and Autumn Period (770BC-476BC), Xitang was the border of Wu State and Yue State. It developed into a town approximately during Tang (618-907) and Song (960-1279) dynasties. During Yuan (1271-1368) and Ming (1368-1644) dynasties, it became a prosperous and populous market town thanks to its fertile soil, temperate climate, and plentiful produce, and convenient water transportation. Ceramic industry, rice market, food industry were thriving at that time. Today, many ancient mansions remain in the town, demonstrating the past of Xitang. The town in early days depended so much on water transportation that it was seldom influenced by the outside world and the legacies of forefathers are maintained. There is no better way to describe it than the sentence ”water of Spring and Autumn Period, town of Tang and Song dynasties, architecture of Ming and Qing dynasties, People of modern times”.

What to see in Xitang Ancient Town

Roofed Corridors (廊棚)
The roof is a brick and wooden structure with black tiles on the top. On the corridor there are many stalls manned by hawkers. The roofed corridor may evoke nostalgia of most travelers.

West Garden (西园)
The West Garden was originally the villa of Zhu family of Ming Dynasty and was changed hand to Sun family. The garden is pretty charming with trees, folwers, rockwork, pavilion, ponds and other ornaments.

Shipi Alley (石皮弄)
The Shipi Alley is paved with 168 stones between Wang family and Sun family’s mansions. It is 68 meters long with the narrowest part being only 0.8 meter. Xitang ancient town is packed with 122 alleys, among which Shipi Alley is the most distinctive one.

Yongning Bridge (永宁桥)
The bridge itself is not too unusual, but it is the best point to find a view of photographing. The long Chaonandai roofed corridor looks like a sleeping dragon on the north bank of the river, and walker and bikers run under the roof; on the southern bank are age-old dwelling houses.

Shao Xiang Gang (烧香港)
Shao Xiang Gang is the name of a river. The streets on its banks are called ”Shaoxiang Gang Street”. This port used to be the most bustling area in the town. It was (and is) famed as the most-visited place for burning incense.

Ginkgo trees in Lu’s graveyard (陆坟银杏)
There are two ginkgo trees on the end of Youdian Road in the town. There were planted in Ming Dynasty, 600 years ago. The two trees are flourishing with big trunk and luxuriant leaves.

Root Carving Museum (根雕馆)
The famous root-carving artist Zhang Zheng, who was born in Hangzhou, once lived in Xitang. His Over 500 masterpieces are included into the list of Guinness. In the museum visitors can enjoy various kinds of root-carving works.

Bridges
As a water town, Xitang was dotted with a number of bridges each with its own feature. Apart from the Yongning Bridge mentioned above, there are some other famous bridges such as Wo Long Bridge (卧龙桥), Song Zi Lai Feng Bridge (送子来凤桥), Huanxiu Bridge (环秀桥), Anjing Bridge (安境桥), Wufu Bridge (五福桥), etc.

In Xitang there is a wide choice of hotels and inns, which can be broadly divided into two types. On weekdays the priceof staying in a hotel is around 100 to 300 yuan. At weekends or holidays, the price jumps significantly.