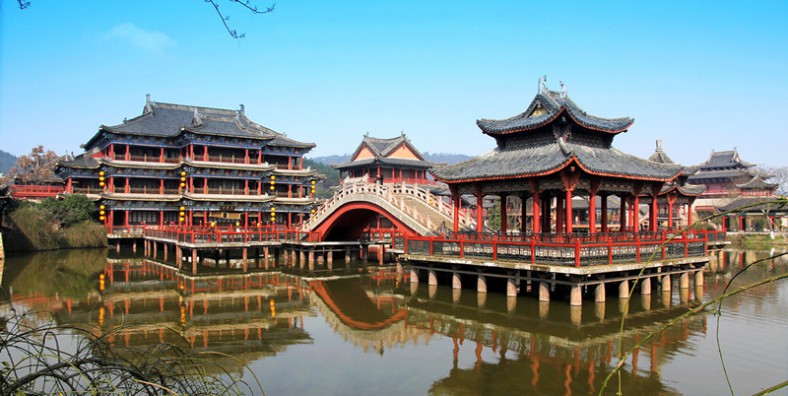 Hengdian World Studios located in the town of Hengdian in Jinhua, 160 kilometers away from Hangzhou and within the 4-hour-transportation tourism and economy circle, is the largest film and teleplay shooting base in Asia, covering an area of 121 square kilometers. Hengdian World Studios was originally built during the mid-1990s with an accumulative investment of 3 billion yuan.

Why is Hengdian World Studios So Special

With all the scenic spots open to tourists, Hengdian World Studios has become a tourism leisure resort with a unique charm. Today, the studio has a full set of facilities, including an amusement park, nightclub, sauna, performing arts center, health club and bowling center. Hengdian World Studios now is listed as a national AAAAA level Scenic Spot, and is indeed a sight should not to be missed.

The Hengdian World Studio is now a popular film & TV production base and has taken “Chinawood” as its informal title given by a Los Angles-based magazine, The Hollywood Reporter. Last year’s blockbuster, Hero, directed by Zhang Yimou, was shot there.

The emerging film & TV making industry has boosted local tourism. More than 10 upscale hotels have been made, with accommodation for 7000 people. Also included is a resort village, covering an area of 164 acres, an international trade building with a capacity for over 1,000 people, and a tourism mansion. All the hotels, fancy or modest, are equipped with entertainment facilities, nightclubs, sauna centers, performance centers, gyms, and bowling halls.

The studio consists of 13 shooting bases with a total area of up to 330 ha. and building areas of 495,995 square meters. In addition to its huge scale, the studio also has several records which includes:

Where is Hengdian World Studios Location

Situated in the middle of Dongyang City of eastern China’s Zhejiang Province, Hengdian has easy access to surrounding cities and provinces.

One thought on “Hengdian World Studios in Dongyang City, Jinhua”