Xinjiang Office Memorial of the Eighth Route army in Urumqi 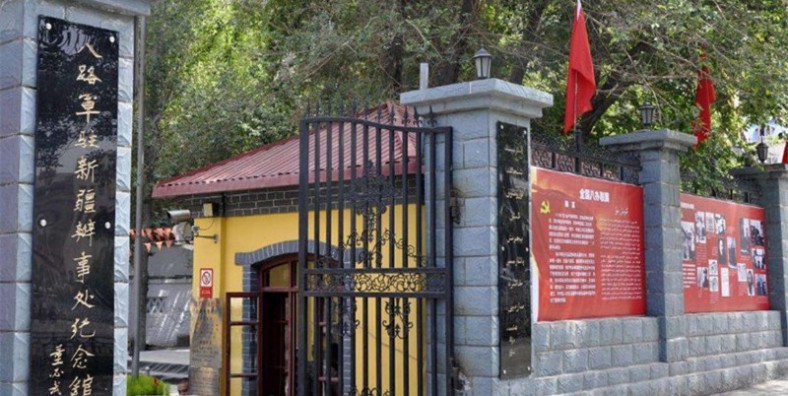 Why is Memorial of the Eighth Route army So Special?

Where is Memorial of the Eighth Route army

Once a private residence, the memorial is located at Shenli Road, Urumqi.

Brief Introduction of Memorial of the Eighth Route army

The Memorial Hall of the Eighth Route Army’s Office in Xinjiang was the place where the Communist Party of China led the Xinjiang people to resist Japan and save the nation during the Anti-Japanese War. It reproduces the historical panorama of the anti-Japanese and national salvation movement and the indomitable prison struggle of the Chinese Communists represented by Chen Yun, Deng Fa, Chen Tanqiu, Mao Zemin, Lin cheru, etc. in Xinjiang from 1937 to 1942. It is a historical witness that countless martyrs condensed their lives and blood. Up to now, the museum has received 700,000 visitors from home and abroad.

History of Memorial of the Eighth Route army

In 1938, it was used as the office of the CPC in Xinjiang, and Den Fa, Chen Tanqiu worked here then. Leaders of CPC, such as Zhou Enlai, Ren Bishi, resided here on their way to the Soviet Union. The office played a significant role in Propagandizing the CPC’s opinion of forming an united national battlefront to resist Japanese, spreading the CPC’s influence upon people of different nationalities in Xinjiang and linking the CPC international society. In 1942, Sheng Shicai, the nomarch of Xinjiang Province, throwed himself into the lap of Jiang Jieshi and began to persecute the CPC. Numbers of the members of the CPC were arrested or killed and the office of the CPC in Xinjiang had to be closed. In 1962, the office was repaired as a memorial and appointed as the cultural relics under the protection of the autonomous region.

Main Attraction of Memorial of the Eighth Route army

The exhibition hall of the Eighth Route Army’s office in Xinjiang is divided into four parts: the formation of the Anti-Japanese National United Front; Spreading Marxism-Leninism and Supporting Anti-Japanese Front Line; Loyal and unyielding revolutionary fighters; Revolutionary martyrs will never die. There are more than 1,500 kinds of cultural relics and documents showing the revolutionary activities of the Communist Party of China in Xinjiang.

In the difficult years of the Anti-Japanese War, a group of outstanding CPC members and progressives braved hardships and dangers to go to the northwest frontier for the liberation of the Chinese nation and the great ideals of communism. They worked hard for the establishment of the Anti-Japanese National United Front and the socialist construction in Xinjiang, and were persecuted by local warlord Sheng Shicai. They spent four years behind bars, giving up life and forgetting death, being loyal and unyielding, and being righteous. Revolutionary martyrs such as Chen Tanqiu, Mao Zemin and Lin cheru gave their precious lives to oppose the invasion of Japanese imperialism and the liberation of the people of all ethnic groups in Xinjiang.

Best Time to Travel Memorial of the Eighth Route army

Visits to museums need not be restricted by seasons. At any time, you can come here to see amazing human relics and all other precious relics, so that you can know more about the prosperous and splendid civilization in this region.