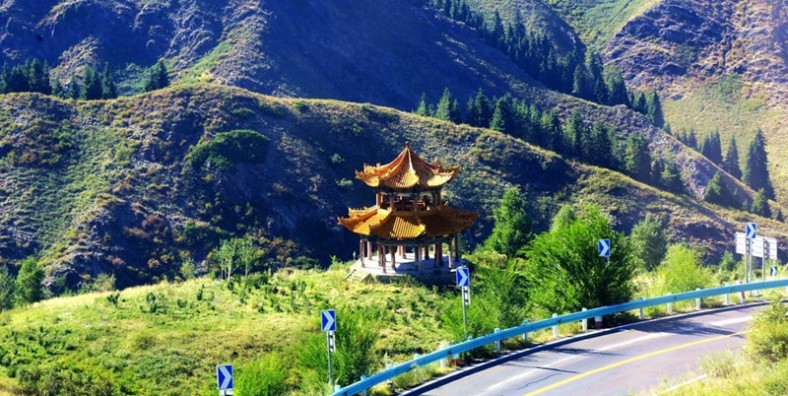 Tian Shan Mountains, also called Tien Shan, Celestial Mountains or Heavenly Mountains. With its particular geological structure and stunning natural landscape, the mountain has been inscribed in the World Heritage List by the UNESCO on June 21st 2013.

Tian Shan Mountains, also called Tien Shan, Celestial Mountains or Heavenly Mountains. As one of the Seven Mountain Systems in the world, Tian Shan Mountains stretches through four countries with a length of 2,500 kilometers from east to west. With its particular geological structure and stunning natural landscape, the mountain has been inscribed in the World Heritage List by the UNESCO on June 21st 2013.

The highest peak – Pobeda Peak at 7,435.3 meters, there are tens of peaks along the Tian Shan Mountains including Khan Tengri and Bogda Peak. And what makes the Tian Shan Mountains more remarkable is that a high mountain lake – the Heavenly Lake. About 110 kilometers away from Urumqi, the lake is located in a valley at 1,943 meters on the northern slope of Bogda Peak.

Aside from Tianshan Wild Animal Park, which is located at the southern foot of Bogda Mountain, the Southern Pasture and Ili Nalati Grassland are also famous tourist attractions along the Tian Shan Mountains which are highly recommended for visitors who enjoy horse racing and the kazakh folk customs.

How to get to Tian Shan Mountains

If you want to get out of the traffic and hassle of navigation, you can book a private tour package that includes visiting, dining and transfer from us. Our local guide and driver will escort you to the Tian Shan Mountains and most convenient way and take care of all the details. You just have to focus on the visiting.

The Best Time to Travel

The best time to travel to Tian Shan Mountains is in summer from June to August when there are beautiful grasslands, cattle and sheep flocks and boundless rape flowers. Besides, for those who favor to enjoy the snow, they are suggested to visit the Mountain before December or after February because the mountain climate between December and February is severe cold and often with wind of force more than 8.

Take along enough warm clothes even if you plan to visit in summer due to the big temperature difference between day and night in the mountainous areas. Also, pay attention to weather changes before visit, especially, the weather forecast for sandstorms.