The Ancient City of Urabo in Urumqi 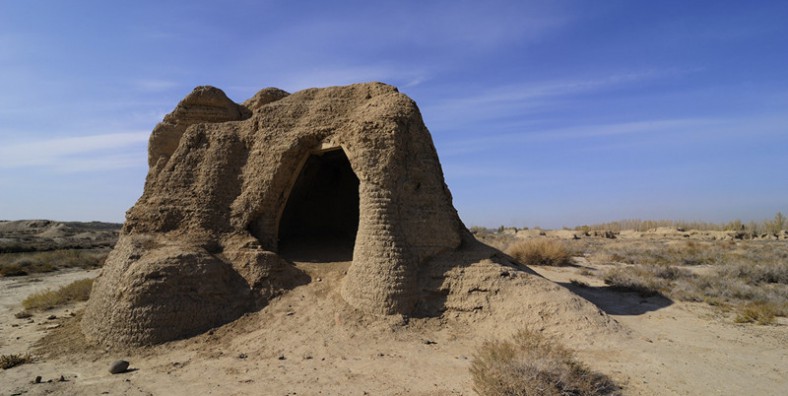 The site is slightly square, 550 meters in length from north to south, 450 meters in width from east to west, more than 2 kilometers in circumference of the city. The city wall is tall and generous, with a residual height of 4 meters and a base width of 5 meters. The four corners of the city wall and the city gates protrude outward.

Why is The Ancient City of Urabo So Special?

The ancient city is littered with pottery pieces dating back to the Tang and Song Dynasties, and a small number of Yuan Dynasty pottery pieces have also been unearthed. Nearby farmers also picked up many round square-hole copper coins from the ancient city of Qing Dynasty, including those from Ganlong to Guangxu. Through these relics of different times, it is conceivable that this ancient city has experienced thousands of years of historical vicissitudes.

Where is The Ancient City of Urabo

Located in the suburb 10 kilometers to the south of Urumqi, the site is the earliest and most complete one with best preservation in Urumqi, and a unit of the cultural relics under the protection of the autonomous region.

History of The Ancient City of Urabo

The existence of the ancient city of Urumqi not only proves the history of Urumqi and the history of commercial and cultural exchanges along the Silk Road, but also shows that the central government stationed troops in the ancient city of Urumqi in Xinjiang more than 1,000 years ago. It is the earliest and best preserved ancient city under Urumqi’s jurisdiction. However, it is so close to the urban area that it can be said to be the origin of Urumqi, which is of great value to the study of the development of Urumqi’s urban history and is also an important historic site for people to visit ancient Urumqi.
On June 25, 2001, the ancient city of Wulabo was selected by the State Council as the fifth batch of national key cultural relics protection units.

Main Attraction of The Ancient City of Urabo

Most scholars believe it’s the ruins of Luntai county established in 22nd year of Zhenguan reign of Tang Dynasty (648). A rammed construction with barbican entrances, the site is 550m long from south to north, 450m wide from east to west and still remains walls about 4m in height. A rammed inner city wall divides the whole city into three parts, each with barbican entrance and watchtower. The city is probably abandoned at the end of the Yuan Dynasty. Pieces of poetry, coins and architectural components have been unearthed here and they provide impotant materials for the study of the developing history and architectural history of Urumqi.

The ancient city is more than a thousand years old. Some people think that it is Luntai City in the Tang Dynasty. Cultural relics from Liao and Yuan dynasties, such as pottery pots, pottery pots, lotus-patterned square bricks, ancient coins and jade articles, have been found on the city’s interior and are now listed as national key cultural relics protection units.

Some people think that it should be Luntai City, an important town on the northern route of the Silk Road in Tang Dynasty, but others hold negative opinions. However, one thing is certain, that is, the ancient city of Urumqi is the oldest and best preserved ancient city within Urumqi’s jurisdiction. However, it is so close to the urban area that it can be said to be the origin of Urumqi, which is of great value to the study of the development of Urumqi’s urban history and is also an important historic site for people to visit ancient Urumqi.

Best Time to Travel The Ancient City of Urabo

Take bus no 312 at Urumqi south railway station, or bus no 528 at sun moon starlight garden and bus no 9 at santongbei to shuixigou toll station to change to buses no 312 and 528