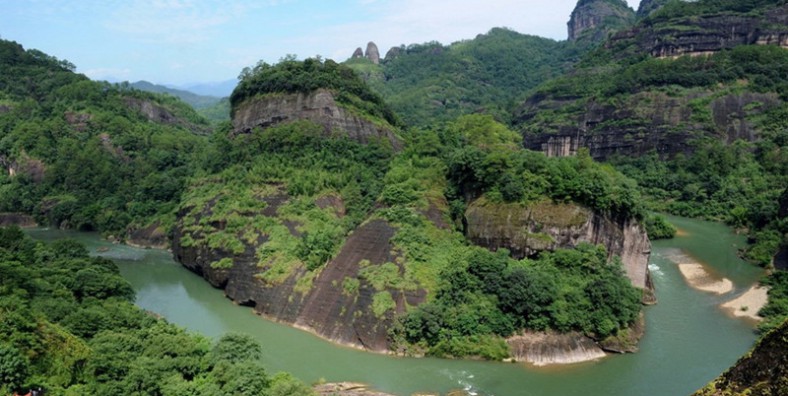 The Wuyi Mountains is one of the most spectacularly beautiful areas of southeastern China. Wuyishan Nature Reserve is well known for its abundance of deep canyons, dense forests, waterfalls, animals (many of them endangered), flora and fauna. It's an idyllic destination for any nature lover.
English Name: Wuyi Mountains
Chinese Name: 武夷山

Located at the northwest of Fujian Province in east China, its main peak, the Huanggang Peak, rises 2158 meters above sea level, being the highest peak in southeast China. With the best preserved and largest tropical primeval forest in central Asia.

Why is Wuyi Mountains So Special

Mount Wuyi is the most important biodiversity conservation zone. In 1987, the Mount Wuyi Nature Reserve was listed as a ”Global Man and Biosphere” by UNESCO, and in 1992, the Global Biodiversity Protected Zone. The Mount Wuyi was listed as a natural and cultural world heritage in 1999. It is known as ”the most beautiful mountain in southeast China”.

Human settlement on the slopes of Mount Wuyi can be traced back 4,000 years by archeological remains. During the Western Han Dynasty, the ancient city of Chengcun was the capital of the Minyue kingdom. In the 7th century, the Wuyi Palace was built for emperors to conduct sacrificial activities, a site that tourists can still visit today. The mountains were an important center of Taoism and later Buddhism. Remains of 35 academies erected from the era of the Northern Song to the Qing Dynasty and more than 60 Taoist temples and monasteries have been located. However, most of these remains are very incomplete. Some of the exceptions for which authentic remains are preserved are the Taoyuan Temple, the Wannian Palace, the Sanqing Hall, the Tiancheng Temple, the Baiyun temple, and the Tianxin temple. The area is the cradle of Neo-Confucianism, a current that became very influential since the 11th century.

June–October is the best time to visit Wuyi Mountain. It is open year round, but visitors can best enjoy the many wonders of nature during warm, dry days. Xiamen is subject to monsoon rains between June and September.  During this period, the plants glow well and river is fuller.