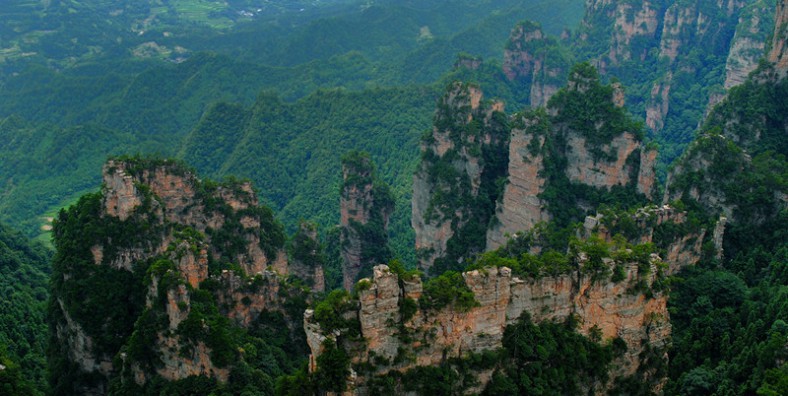 A spectacular area stretching over more than 26,000 ha in China's Hunan Province, the site is dominated by more than 3,000 narrow sandstone pillars and peaks, many over 200 m high. Between the peaks lie ravines and gorges with streams, pools and waterfalls, some 40 caves, and two large natural bridges.

Why is Wulingyuan Scenic and Historic Area So Special?

The scenic area is distinguished for the quartzite sandstone peaks rare in the world, and well known for its five wonders of spectacular peaks, grotesque rocks, secluded ravines, graceful waters, and Karst caves. In addition, there are also dense forests, diversified streams and brooks, capricious mists, and plain pastoral landscape, to form the enchanting multi-dimensional scenery.

Wulingyuan Scenic Area (also known as Wulingyuan National Park) is located in northwest of Hunan Province in central China. It consists of the Zhangjiajie Forest Park, Suoxi Valley Nature Reserve in Cili County and Tianmen Mountain National Forest Park in Sangzhi County, with a total area of about 500 square kilometers. Yangjiajie is a recently discovered a new area.

Hundreds of millions of years ago, Wulingyuan is a vast ocean. With constantly change of nature, the geomorphology of Wulingyuan has changed into a wonderful and fantastic scenic spot. It has got a lot of honorable reputation, such as the world Natural Heritage Site, world geological parks, national 5A-class tourist area and National Civilized Scenic Area. It is 36 kilometers away from Zhangjiajie downtown and famous for lofty peaks, fantastic rocks, valleys, gurgling springs and caves.

The Zhangjiajie National Forest Park is the first state-level forest park in China. Over ninety-seven percent of the park is covered with varieties of trees and other valuable plants. The park is a real treasure house. The Lobster Flower (Long Xia Flower), a sort of flower that can change color five times in a day, is unique in the park. The views in this area include the Golden Whip Stream, Huangshi Fort and Yuanjiajie. The Golden Whip Stream is a poetic stream, with crystal clear water running quietly between strangely-shaped peaks. The Huangshi Fort and Yuanjiajie are both classic spots that can not be missed in the park.

The Suoxi Valley Nature Reserve is the center of the scenic zone and is the largest among the four areas of the park. About 200 attraction spots can be found here. The name of Suoxi Valley is transliterated from the language of the Tu Minority Group, and it means ‘a mountainous village with dense fog’. This area includes the Ten-mile Gallery (Gan Xi Gou), where vivid pictures formed by its peaks are rather impressive. The West Sea, also called the sea of stone forests, is amazing. Bao Feng Lake is also an excellent place to visit to gain an understanding of the local customs of West Hunan Province.

The Tianzi Mountain Nature Reserve is rich in strange peaks and rocks, and in constant clouds and fog. The reserve lies at a high elevation which makes sightseeing physically challenging. The Yellow Dragon Spring, Teaboard Tower and Lao Wu Chang are areas which have been developed for visitors. This reserve is renowned for four marvelous spectacles-the cloud and mist, the night with shining moon, the winter snow and the morning and evening rosy clouds.

It wasn’t until the 1990s that the Yangjiajie Scenic Area was preserved. Legends had it that in order to suppress rebellion, the famous Yang Family (a family quite loyal to the court and contributed to the fighting against Qi Dan in the Song Dynasty) camped and settled here later because of the continuous war. And as a result, Yangjiajie emerged. So far, the pedigree of the Yang Family is still well kept in this area which also contains the Tian Bo Mansion, Liu Lang Bay and Qi Lang Bay.

Together with the natural scenery of the four sections of the park, the life and customs of several Chinese minority groups (Tu, Miao, Bai) are also of interest. Their houses, farms and their singing and dancing undoubtedly add an element of happiness and beauty to Wulingyuan.

How to Get to Wulingyuan Scenic Area

If you want to get rid of hustle of transportation and troublesome navigation, you can book a private tour package which covers visiting, dining and transfer from us. Our local tour guide and driver will escort you Wulingyuan Scenic Area in Zhangjiajie with speed and convenience, and take care of all the details. You just need to focus on travel.

Zhangjiajie Central Bus Station (near Zhangjiajie Railway Station) has regular tourist buses to Wulingyuan every a few minutes and the bus journey takes about 40 minutes. Bus fare is around CNY 12.