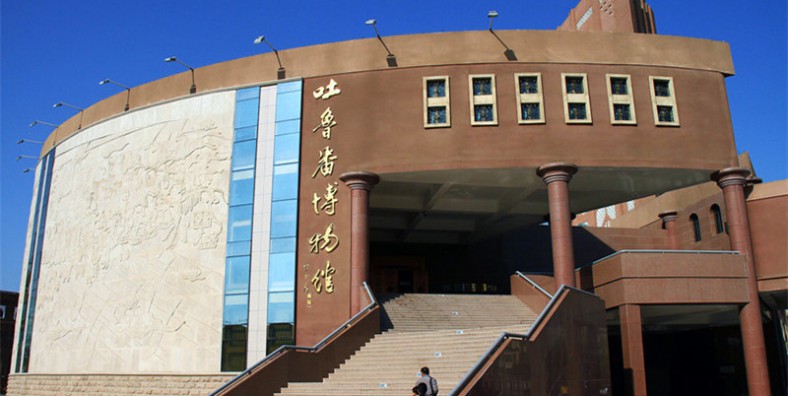 It is the second largest museum in Xinjiang, a national first-class museum, a national 4A tourist attraction, a national social science popularization base, and a patriotism education base at the autonomous district level. It is a collection of cultural relics and exhibits.

Why is Turpan Museum So Special?

More than 5 thousands of cultural relics are stores in the museum. On its basic display “Turfan Historical Relics Exhibition” are numerous valuable cultural relics of various periods found in Turfan, which show people the course of history and civilization of Turfan.

Where is Turpan Museum

Turfan Museum Located at Gaochang Road , Turfan, the museum was built in 1965 and relocated to the present site recently. The new museum covers a ground area of 7000 square an exhibition area of 3000 square meters.

The Turpan Museum was founded in 1956. Sanyi’s site has formed its current scale. The current site is located at 1268 Mu Na Er Road, Gaochang District, Turpan City, Xinjiang Uygur Autonomous Region. It was officially completed and opened to the public free of charge in September 2009.

In 2017, it will be promoted to the third batch of national first-class museums.

Some special exhibitions are also held in the museum. They are “Ancient Mummies Exhibition”, showing ancient mummies and their dresses and ornaments survived from the particular climate condition, and “Rhinoceros Exhibition”, showing a rhinoceros fossil and a dinosaur fossil of Jurassic Period about 7000-2400 ten thousands years ago.

General History of the Turpan Area

This exhibition hall is mainly to show selected cultural relics that have been unearthed, levied, picked and donated since the founding of the People’s Republic. There were human traces in this area as early as the Stone Age. It entered the Bronze Age about three thousand years ago. The Han Dynasty (206BC-220AD) first annexed it to China’s territory in 60BC. About 400 years later, the Gaochang Prefecture and the Gaochang Kingdom were established here successively. It returned to the central government of China when the Tang Dynasty (618-907) united the nation. The ancient Uighur Empire was established in 840… Turpan’s history is created by people of different tribes and ethnic groups (including some from Central Asia), cultures and religions. The 900-square-meter (1,116-square-yard) exhibition hall means to represent panoramic picture of the region.

About 20 million years ago, the giant rhinoceros (Paraceratherium, also commonly known as Indricotherium or Paraceratherium), the largest land mammal ever known, lived in the area which was thought to be a sea, but dramatically to be a dessert now. It is said that it could eat about 500 kilograms (1,102 pounds) of leaves or grass every day. It is 5 meters (about 5 yards) high, and 9 meters (about 10 yards) long, with a weight of 30 tons (about 66,139 pounds). The fossil skeletons here are the most complete giant rhinoceros fossil ever excavated. Fossils of rhinoceros and other creatures in remote geologic ages are displayed with the aid of pictures, models, short films and videos, in order to give a vivid interpretation of the scene in millions of years ago.

This is the most mysterious and attractive part of the museum. The mummies discovered in the area are bestowed by local geography and climate, like being dried by the Flaming Mountain. Numerous mummies had been found in Turpan, which is the main source of mummies in the Xinjiang Regional Museum and other museums nationwide. There are nine well-preserved mummies and one skeleton on display, including two couples and a Shaman witch. The earliest one is the body 3,200 years away. Accessories include burial objects, mural paintings, replica of graves, silk paintings.

Scripts and documents excavated in the area covered the periods from the Sixteen Kingdoms Period (304-439) during the Jin Dynasty (265-420), to the Yuan, Ming and Qing dynasties. The types include letters, contracts, sutras, list paper of funerary objects, prescriptions and so on. Meanwhile, there are ancient coins found in nearby tombs and silver coins of Sassanid Persia donated by a famous numismatician.

There is a 56-meter-high sightseeing tower in the northeast corner of the museum, a four-storey training center, etc.

Visits to museums need not be restricted by seasons. At any time, you can come here to see amazing human relics and all other precious relics, so that you can know more about the prosperous and splendid civilization in this region.