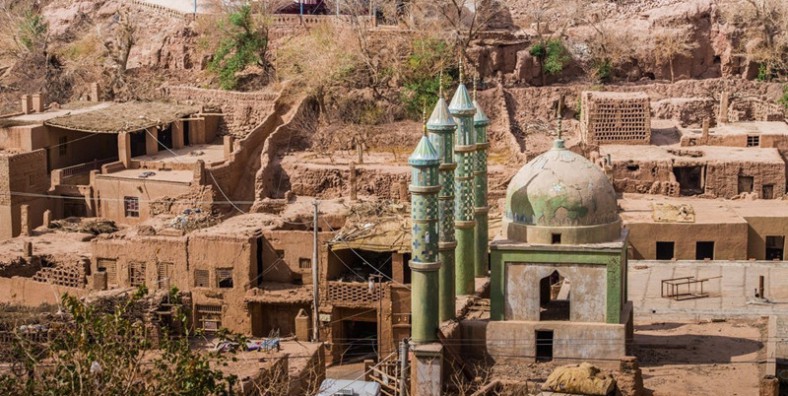 Tuyoq or Tuyugou or Tuyuk (Chinese: 吐峪沟) is an ancient oasis-village in the Taklamakan desert, 70 km east of Turpan in Shanshan County in a lush valley cutting into the Flaming Mountains, with a well preserved Uyghur orientation, and few tourists. It is famous for its seedless grapes and a number of ancient Buddhist meditation caves nearby containing frescos.

Tyugou Mazzar is situated at Mazha Village in Tuyugou，Shanshan County of Turpan Prefecture at the foot of the Tuyugou Thousand-Buddha Grottoes. With a history more than 1,000 years, it is listed among the 2nd batch of China Historic and Cultural Townships and Villages. The legend said that after the successful establishment of Islam in the 7th century, five of Mohammed’s student missionaries came to China to preach．Walking eastwards，they arrived at Tuyugou after many difficulties，and a shepherd with a dog became the first Chinese Islamist．Inspired by their first success，they settled down here to continue their mission After the 5 student missionaries and the first Chinese Islamist died，they were buried in a valley of Tuyugou—the present mazzar. There are six tombs and a doglike stone in the cave，a Wood fence in front of the entrance and a wood stick inside it. They are preserved as the holy remains of sages.

The mazzar is a traditional arched building with Islamic style．Around the tomb is a round raw Soil-made wall with 3 meters high and 0.5 meters in diameter. According to the Muslim legend，one must worship in Tuyugou before setting out the pilgrim to Mecca. Therefore it is called the holy place–“China’s Mecca”. Tuyugou village is a traditional Uygur Village. Not only language，religion，costume, but houses and orchards are well preserved，which draws great attention in recent years．Meanwhile Tuyugou is a typleal“grape valley”．The grapes fields and grape drying houses present the charm of a famous place to produce grapes．