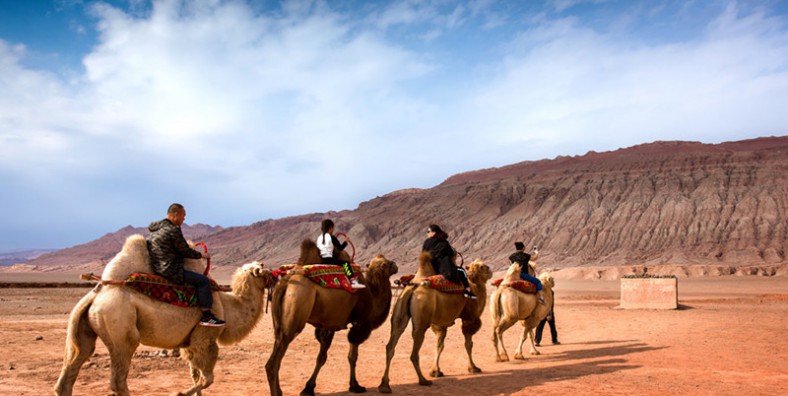 The volcano in Xinjiang is the most famous scenic spot in Turpan. It is located on the northern edge of Turpan Basin, the northern road of the ancient Silk Road. On April 13, 2018, the Huoyan Mountain scenic spot was shortlisted for the "Magic Northwest 100 Scenes".

Why isThe Flaming Mountain So Special?

The Flaming Mountain is a legendary mountain, running from Shanshan County on west, 98 kilometers in length and 9 kilometers across, with a relative height of 500 meters and the highest peak 831.7 meters.

Where is The Flaming Mountain

The mountain is a branch range of the Bogda Mountain , formed in the orogenic movements of the Himalayas. It is located on the northern edge of Turpan Basin, the northern road of the ancient Silk Road.

History of The Flaming Mountain

It should be noted that spontaneous combustion of coal seams is not uncommon in Xinjiang. Today, the sulphur ditch coalfield, 42km from Urumqi, has been “crisscrossed with fissures, thick smoke, flames whirring between rock crevices, which have lasted for many years” since the Guangxu period of the Qing dynasty. It has been more than 110 years now (2019). This coalfield fire area took four years (1999 -2003) and was only extinguished in 2003. “Tianshan is a region with intense geological activities. The horizontal coal seam buried in the stratum is mostly turned into inclined coal seam after many geological movements. The coal seam comes into contact with the air after outcrop. After oxidation, the accumulated heat increases, causing spontaneous combustion, which eventually leads to coalfield fire.” The nursery engineer, technical director of the sulfur ditch coalfield fire area project, explained. The heat and dryness of the volcano are all attributed to the unique natural and geographical conditions here. The real volcano is one of the branches of the Tianshan Mountains and was formed 50 to 60 million years ago during the Himalayan orogeny. For thousands of years, numerous fold belts left by the lateral movement of the earth’s crust and the wind erosion and rain stripping of nature have formed the undulating mountain potential and vertical and horizontal ravines of the volcano. Temperatures in mountain areas can reach 47℃ in summer and 80℃ in direct sunlight. Eggs can be baked in sand.

Brief Introduction of The Flaming Mountain

Its highest air temperature in summer is 47.8 degrees centigrade, and the ground is over 70 degrees centigrade in summer. For this reason and its natural geographical features, people vividly call it “ Flaming Mountain ”. Through the well-known story about this mountain in the novel “Journey to the West”, the mountain has enjoyed great popularity and become an ideal place for tour.

Main Attraction of The Flaming Mountain

Now, the scenic area includes the mountain, a Culture Gallery of Journey to the West, Flaming Mountain Geographic Culture Museum, Gaochang Historical Celebrities Hall and a 12-meter high thermometer. In the Culture Gallery of Journey to the West, 24 pieces of relief pictures, basing on 24 stories from the Journey to the West, lively show how the Tang Sanzang struggled to the destination. The Turpan’s culture and the geographic features can be known in the Geographic Culture Museum. 14 statues of local famous people such as Tang Sanzang, Cen Shen (a famous poet in the Tang Dynasty) and Lin Zexu (an official in the Qing Dynasty 1644 – 1911) are collected in the Historical Celebrities Hall, and all these people have close relationship with Turpan. The thermometer, recorded in Guinness World Record, has an appearance like the Golden Cudgel, the weapon of Monkey King, and the exact surface temperature is shown on it. Taking a photo with the thermometer and recording the high surface temperature may be an interesting thing.

If one intends to enjoy the wonder of the mountain, they can use carts pulled by goats or camels to travel. Just in front of the mountain, some big statues from Journey to the West, having relationship with the Flaming Mountain, are placed for photographing. The roasted egg in the sand is a popular food there. It has a flavor different from the boiled and fried ones.