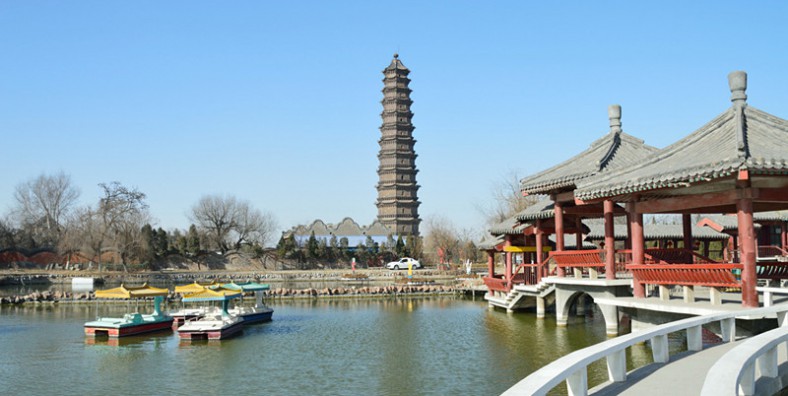 This tour connects most of the highlights of Henan province, including the ancient capitals Zhengzhou, Kaifeng and Luoyang, as well as Dengfeng - the place of Shaolin Temple....

Henan has rich historical and ancient cultural heritages. This tour connects most of the highlights of Henan province, including the ancient capitals Zhengzhou and Kaifeng, Luoyang, as well as Dengfeng – the place of Shaolin Temple. After airport-hotel transfer, head to visit the national Museum – Henan Museum, which is one of the three major museums in China, and the largest center for the collection and study of cultural relics.

Afterwards transferred to Yellow River Scenic Area, 20 kilometers away the northwest of Zhengzhou City. It is a section of hills along the Yellow River covered with bushes, trees and a large paved plaza. In the morning, drive to Kaifeng to visit Dragon Pavilion first, a palace built on a 26.7-meter-high grey-made huge pedestal, which is a typical representative of the cultural and historical heritages of Kaifeng. Then head to Grand Xiangguo Monastery, a famous Chinese Buddhist temple built in Northern Qi Dynasty.

After lunch, move on to Millennium City Park. Located in western shore of beautiful Longting Lake in Kaifeng, it is a large-scale historical cultural theme park in accordance with the masterpiece Riverside Scenes at Qingming Festival, a Chinese art treasure painted by Zhang Zeduan, a famous artist of Northern Song Dynasty.

Later, visit Kaifeng Iron Pagoda, which is a Buddhist Chinese pagoda built in 1049 during the Song dynasty (960–1279) of China.

After visiting, drive back to Zhengzhou for overnight. Morning drive to Dengfeng for sightseeing. Visit Shaolin Temple first, which is 80km south-east of Luoyang. With a history of more than 1500 years, it is reputed as the Head Temple of all Zen Buddhist temples in China. And in the year of 2010, it was listed as the UNESCO World Cultural Heritage Site.

Take about 1 hour to visit Shaolin temple and then head to Pagoda Forest to see hundreds of stone pagodas and graveyard for the monks through the ages.

Shaolin Kung Fu Performance is another highlight of this tour, which is performed by the professional performance team from Shaolin Tagou Wushu School. Morning drive about 80km to Luoyang city and start today’s visit with White Horse Temple, the first Buddhist temple in China and renowned as the cradle of Chinese Buddhism. It was established in 68 AD under the patronage of Emperor Ming in the capital Luoyang of Eastern Han dynasty.

Then visit the Longmen Grottoes. Located on both sides of the Yi River to the south of the ancient capital of Luoyang, it comprises more than 2,300 caves and niches carved into the steep limestone cliffs over 1km long stretch.

Later continue our tour to Luoyang Museum, which offers exhibits of the rich cultural heritage of Luoyang. There are over 2000 cultural relics of different dynasties in Chinese history, which reflects the historic development of the city.

Sightseeing and Activities: none
Accommodation: none
Meals: Breakfast

Free leisure time to explore the ancient capital city  until being escorted to the airport for your next destination.